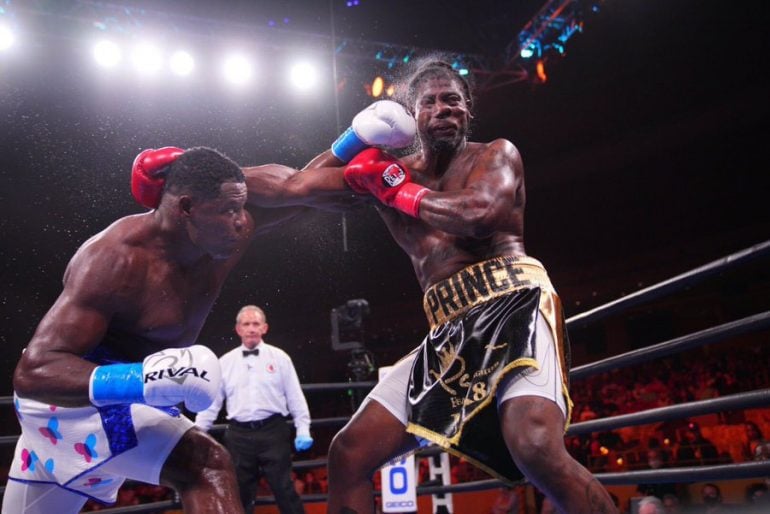 One monster overhand left from Luis "King Kong" Ortiz (left) turned around a difficult fight with Charles Martin and kept the veteran in Ring's heavyweight rankings. Photo from PBC
01
Jan
by Ryan Songalia

Through four rounds, Luis Ortiz looked every one of his 42 years of age, being stunned and dropped by blows that he may have stood up to years earlier.

But in heavyweight boxing, things can change in an instance. And that’s exactly what happened in round six.

Ortiz bailed himself out with a sixth round stoppage of former IBF heavyweight titleholder Charles Martin on Saturday night at the Seminole Hard Rock and Casino in Hollywood, Fla. The bout was a rare battle between heavyweight southpaws, and produced exciting action.

Ortiz, who was down in round one on an overhand left and in round four from a counter jab, turned the tables in round six, when a double jab set up an overhand left that froze Martin on his feet and rendered him a blank canvas for Ortiz to paint with punches. Martin collapsed into the ropes, and was left tied up in the ropes.

Ortiz, who hadn’t fought since knocking out Alexander Flores in 45 seconds in November of 2020, did a professional job of finishing Martin, going to the body to set up punches upstairs. An uppercut from Ortiz put Martin down once again, bringing the bout to an end at 1:37 of the sixth.

Ortiz has now won two straight since his seventh round knockout loss in 2019 to Deontay Wilder, who had previously stopped him in ten rounds.

“Southpaw against southpaw is a very difficult fight,” said Ortiz. “In the end, intelligence won the fight.”

The 35-year-old Martin, who was leading by the scores of 48-45 on two cards and 47-46 on the third, had been riding a three-fight winning streak.

Ortiz had weighed a career-high 243.25 pounds heading into this bout, while Martin was nearly eight pounds lighter than his previous bout, a sixth round TKO over Gerald Washington, at 246.25 pounds

Frank Sanchez never had to switch gears out of neutral, handling late replacement Christian Hammer with ease en route to a shutout victory.

Hammer (26-9, 16 KOs) was a replacement foe for the unbeaten Carlos Negron, stepping in on four days’ notice after Negron tested positive for COVID-19.

Whether he was trying to get in some rounds under his belt, or is just a naturally cautious fighter, Sanchez didn’t appear too eager to finish Hammer, backing off in round nine when Hammer was against the ropes and absorbing power shots. Sanchez finally scored a knockdown in the final twenty seconds, though it was clear that it was the product of a throw down.

Sanchez did most of his damage with body punches, nailing the substantial midsection of Hammer, and with overhand rights. Hammer didn’t have the speed or craft to threaten Sanchez but continued to come forward and engage throughout the ten-round distance.

Hammer, a Romanian based in Germany, was coming off a fifth round stoppage loss to Hughie Fury in October.