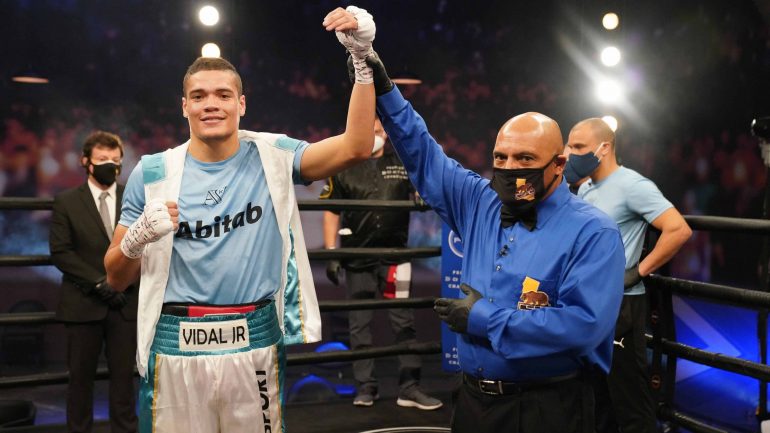 Vidal, originally from Montevideo, Uruguay and now residing in Coachella, California, had not fought since defeating fringe contender Immanuwel Aleem by majority decision on July 17. About a month after the fight, his father and trainer Amilcar Sr. unexpectedly passed away.

The fight against Bulacio was a rematch. Vidal stopped Bulacio in eight rounds in May 2019. He wasn’t as dominant in the rematch.

From the opening bell, Vidal looked sluggish and his timing was off. It did not help that Bulacio walked him down against the ropes or in a corner, connecting several times with lead or counter right uppercuts to the head. Both fighters had their moments in exchanges in the center of the ring during the middle rounds.

Sensing he was down on the scorecards, Vidal let his hands go more during the last two rounds. The taller Vidal did connect more to the head and body, which was not the case early on during the fight.

Sampson Lewkowicz, who promotes Vidal, told The Ring earlier this week there is a possibility the 25-year-old could return to action in the United States sometime in April. Vidal has fought on a handful of Premier Boxing Champions (PBC) cards, including once on ShoBox. The win over Aleem took place on a Showtime Championship Boxing telecast.

Bulacio, who resides in Sacanta, Argentina, drops to 10-5, 7 KOs. The 32-year-old has lost four of his last seven bouts.

Another fighter promoted by Lewkowicz also saw action and came out victorious on Wednesday.

Schramm, who is originally from Buenos Aires and lives and trains in Los Angeles, scored a knockdown at the end of Round 1. A right cross to the head hurt Veron and another right cross to the head sent him reeling against the ropes. Referee Antonio Zaragoza correctly administered a standing 8-count, allowing Veron to make it out of the round.

As the bout progressed, Veron was able to get himself back in the fight with his awkward countering with hooks and crosses to the head and body of Schramm. Veron was deducted a point before the start of round 6 after throwing and landing a left hook to Schramm’s stomach after the previous round ended.

Both fighters had their moments during the second half of the fight, even standing and trading in the center of the ring that brought a reaction from the crowd. Veron was game, but the point deductions from the standing 8-count in the opening round and for the foul at the end of Round 5 was the difference between the loss and earning a draw.