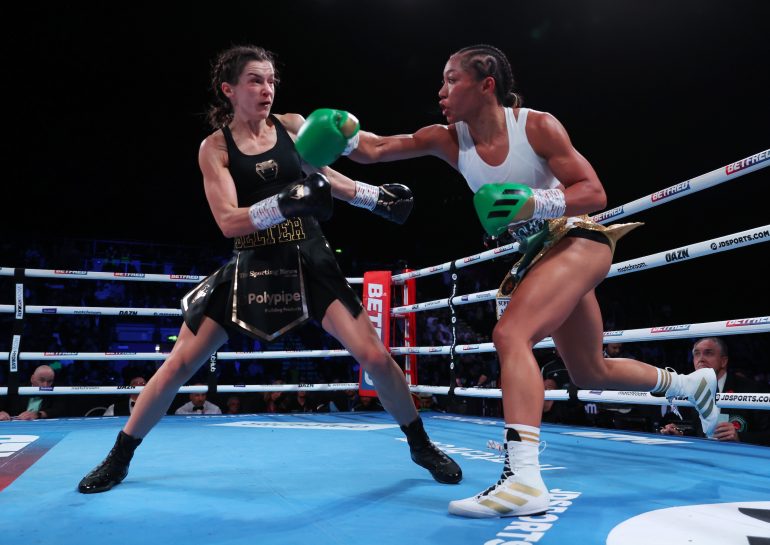 Alycia Baumgardner has signed a multi-fight promotional deal with Eddie Hearn and Matchroom.

Baumgardner (11-1 7 KOs) burst onto the World scene with a stunning KO win over Terri Harper in Sheffield, England in November, ripping the WBC and IBO World Super-Featherweight titles from the Doncaster star in the fourth round of her first World title fight.

The 27 year old is eyeing a massive year in 2022 and has made no secret of her targets – to unify and become undisputed at 130lbs, putting both IBF and WBO champion Mikaela Mayer and WBA ruler Hyun Mi Choi on notice – and the Ohioan has made it clear to Hearn, Matchroom and co-promoters King’s Promotions what she wants, and that’s all the marbles.

“2021 was definitely a breakthrough year for me,” said Baumgardner. “I had a great experience working with Matchroom to win the WBC and IBO World titles in the UK. Signing this deal with them puts me in a position to achieve my next goal of becoming Undisputed at 130 pounds. Being on top is to stay on top and continue being the athlete I know I am.

“Have no doubt I am the top dog in my weight class and it’s only a matter of time before I have all the belts to prove it. Nobody is going to stand in my way. I’ve worked very hard to stay and make my mark. I will continue making history in the sport of boxing.”

“I am delighted to welcome Alycia to the team,” said Hearn. “Alycia provided one of the KOs of the year against Terri and made the boxing world stand up and take notice that she’d arrived at the top table.

“Alycia is a terrier in the ring and demonstrated her pop with that stoppage, but she’s also a huge personality with real charisma; she is the full package and she’s going to have big fights in 2022 and beyond to prove it.”