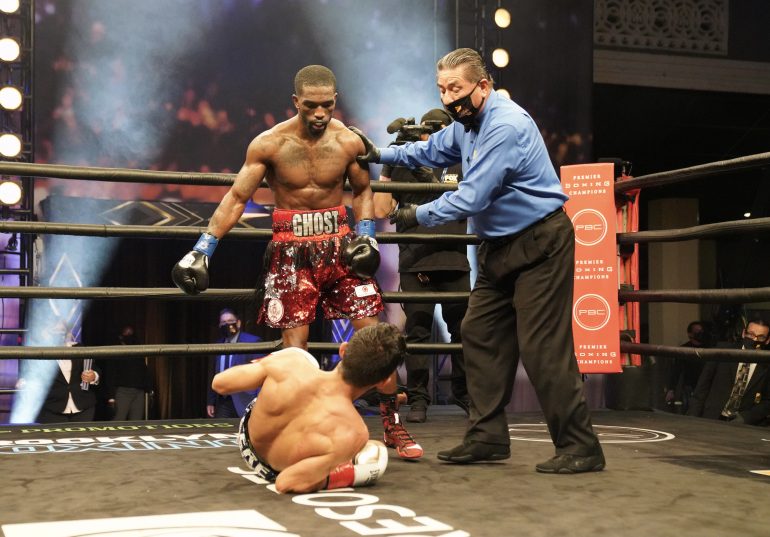 When Frank Martin got the nickname “The Ghost,” it wasn’t because of anything supernatural or macabre. He was competing at the 2016 National Golden Gloves in Salt Lake City, Utah when the lights suddenly went out in the workout room. While other boxers stopped exercising, Martin continued to cut weight, using the lights from his friends’ smart phones to see what was in front of him. His shadow danced off the wall as he threw punches and sweated off the ounces.

Martin won that tournament, defeating Vergil Ortiz Jr. in the finals to become a national champion and raise his profile in the sport.

Martin hopes to float his way into title contention in the lightweight division this Saturday, when he faces Filipino banger Romero Duno in a ten-round bout at the Seminole Hard Rock Casino in Hollywood, Fla. The bout will headline a PBC on Fox broadcast (beginning 5 p.m. ET), that was precede a pay-per-view card headlined by Luis Ortiz facing Charles Martin.

“The main thing is just knowing that the guy will come to fight. He’s not gonna lay down so I’m expecting a fight out of it,” said Martin, who, like Duno, is 26 years old.

Martin didn’t come to boxing until he was 18. He had wanted to fight as a child, but his mother forbade it. Instead, the Detroit native focused on wrestling and football, making it to the state championships on the mat and excelling as a running back on the field. At age 17, he moved to Fort Wayne, Indiana, where he dabbled in boxing, and then began taking it seriously after moving with his brother in Indianapolis the following year.

“In 2016 it was more like, I was just so locked in on winning it,” said Martin. “Whoever I was fighting I felt like, I had won just with my training leading into the training. I was just so mentally focused, there was no doubt.” Martin had the experience of having beaten other top amateurs, like Abraham Nova, and didn’t allow the task to overwhelm him emotionally.

“With everything in me, I knew that I was gonna win it,” said Martin.

Despite winning the National Golden Gloves, the southpaw boxer turned pro in 2017 with little fanfare, fighting on small cards in the Midwest. His big break came when he linked up with current head trainer Derrick James, who has risen to international acclaim for his work guiding unified welterweight titleholder Errol Spence Jr. to pound for pound success.

Martin made his Premier Boxing Champions debut in February of 2020, stopping another Filipino boxer, Reymond Yanong, in four rounds, and then found himself on a bigger platform in his next fight, stopping Tyrone Luckey in 5 rounds on the Spence vs. Danny Garcia pay-per-view undercard last December.

Martin has stepped up significantly in his last two bouts, knocking out the previously unbeaten Jerry Perez in seven rounds, and shutting out Ryan Kielczweski in August on the Manny Pacquiao-Yordenis Ugas card.

Duno is the latest in a series of step-up bouts for Martin. Duno, who is from Cotabato City, Philippines but lives and trains in Miami, rose to prominence in 2017, knocking out the previously unbeaten Christian Gonzalez in two rounds. The heavy-handed Duno was signed to Golden Boy Promotions but his momentum fizzled out, and was knocked out in one round by Ryan Garcia in 2019. He has since won three straight by early knockouts against nondescript opposition.

“I want fans to actually see who I am, what I bring to the fight game. My style, just my personality in the ring and just my fighting style,” said Martin. “Taking heed to me as one of the new lightweight fighters in the division who are gonna be a problem.”

The bout will be just Martin’s third scheduled ten-rounder, but he says he is ready for the top of the division should he get past Duno.

“They put their pants on just like me. I’m not a green fighter, I’m ready for those guys,” said Martin.

“I’m not just saying I’m ready to sound good. I’m getting the best training, I’ve got speed, I’ve got power, I’ve got good IQ. I’m ready for those guys now.”