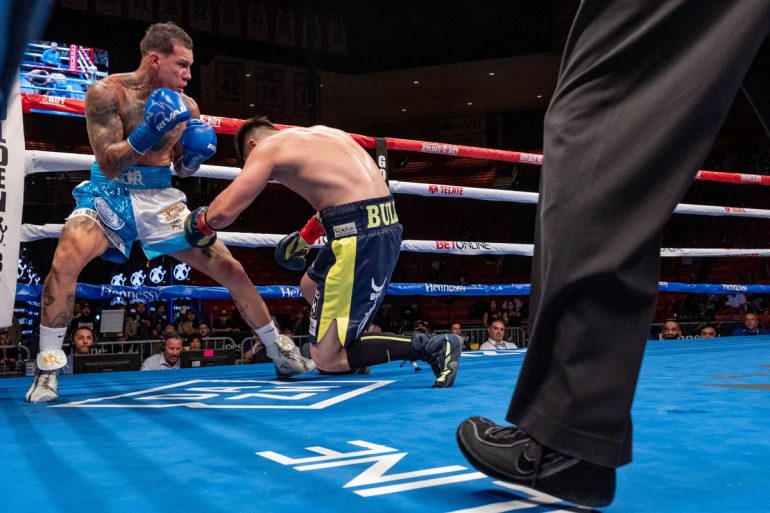 Age and experience beat youth and power when King Gabe Rosado blasted Bektemir Melikuziev in the third round of their crossroads bout.
29
Dec
by Ring TV

Gabriel Rosado’s thunderous one-punch, third-round knockout win over the previously unbeaten super middleweight Bektemir Melikuziev has been named The Ring’s Knockout of the Year for 2021.

It was the perfect storm. Melikuziev was unprotected because his left hand was in motion and he multiplied the force by hurtling in toward the Philadelphia veteran.

For his part, the Freddie Roach-trained Rosado had lured his opponent in with a wayward right, which was well out of range, got Melikuziev to commit in his next attack and then struck. There were only about three seconds between the right hands, but it was the very definition of a trap being set in boxing.

The Uzbek took the bait, and his physical undoing was as dramatic as the blow itself.

His hands dropped limply, he began to tip to his left, and then he pitched sideways in a crumpled heap.

“It was one of those fights where I knew I’d have to dig deep because he’s a dangerous guy,” said Rosado, who celebrated ringside with Golden Boy’s Bernard Hopkins, a former Philly middleweight himself. “He’s strong and he throws heavy shots with knockout written on them. I always knew I had punching power. It was a matter of sitting on my shots and putting my mind to it. He’s a big puncher. I felt his shots to the body earlier in the first round.”

“I was trying to time him. I missed the shot a couple of times in the second round, but I was timing him. I caught him. I lured him into the corner, he loaded up and I caught him with that good right hand. It was just one of those shots.”

Rosado’s emphatic win earned him another big fight, but he would lose on points against Jamie Munguia in November at the Honda Center in Anaheim.

However, the startling knockout of “Bek the Bully” in Texas in June showed everyone that the 35-year-old is still one of the most dependable gatekeepers in the sport. He’s also had his fair share of wars but the Melikuziev fight will be remembered for just one shot… (The full story, written by Tris Dixon, will appear in the March 2022 issue of The Ring.)