The Ring Awards – Round of the Year: Tyson Fury-Deontay Wilder 3 (Round 4) 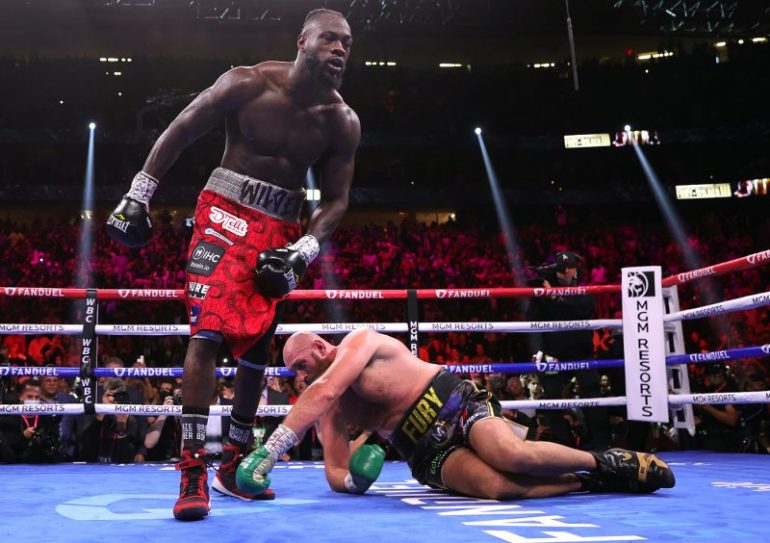 Tyson Fury had again predicted he would destroy Deontay Wilder, and when he floored the ex-champion in the final minute of Round 3 with a right to the temple, the table for Fury’s seemingly inevitable KO victory appeared set.

Then came Round 4, a round that encapsulated the series’ thrilling combustibility in three short minutes and transformed Fury-Wilder III from just another heavyweight championship blowout into a potential modern classic. For these reasons, it was named The Ring’s 2021 Round of the Year.

The round began with the still-shaky Wilder on the retreat and Fury pinning the challenger to the ropes and leaning on him, intelligently maximizing his 39-pound weight advantage. Fury’s mauling and brawling continued through the first two minutes, and according to Fan Duel’s Live Moneyline Odds, Fury was a prohibitive -3000 choice while Wilder was at +1400, an indicator of how much the tide had turned in Fury’s favor.

But with 56 seconds remaining, Wilder caught Fury coming in with a pinpoint cross to the temple. The effects of the blow reverberated through Fury’s body like a wrecking ball striking a skyscraper’s skeleton; the foundation shuddered, the underpinnings collapsed and the rubble was splayed in front of the red corner pad. The 15,820 spectators inside the T-Mobile arena erupted at this shocking turn of events and a triumphant and re-energized Wilder raised his right fist and strode toward the neutral corner.

Just as he did in Round 12 of the first fight, Fury internally rewired himself with stunning speed and regained enough awareness to rise at referee Russell Mora’s count of seven. The action resumed 23 seconds after Fury hit the floor, and, for the first time in the match, there was genuine suspense and electric excitement. As pumped-up ringsiders stood as one, Wilder gunned for the finish with blows that wildly missed the target, and Fury even connected with a heavy right to the side of the challenger’s head. Moments later, however, Wilder landed a cuffing right high on the head and Fury tumbled to the canvas for the second time.

Seventeen seconds remained in this topsy-turvy round, and as Fury sat on the floor, his expressive face told the story: surprise at being knocked down again, an almost imperceptible nod to his corner that he was still in control of his faculties, mustering up the energy to rise again and steeling himself for what was to come. Because Wilder wandered from the neutral corner, Mora stopped his count and ordered Wilder to comply with the rules, a development that gave Fury extra seconds of recovery time.

This time, Fury regained his feet at Mora’s count of six, and by the time Mora completed his mandatory eight count and finished the post-knockdown protocols, the round-ending bell had sounded.

The events of Round 4 established a new exciting narrative that continued for the remainder of the bout. Because of that, this slice of time is being immortalized… (The full story, written by Lee Groves, will appear in the March 2022 issue of The Ring.)