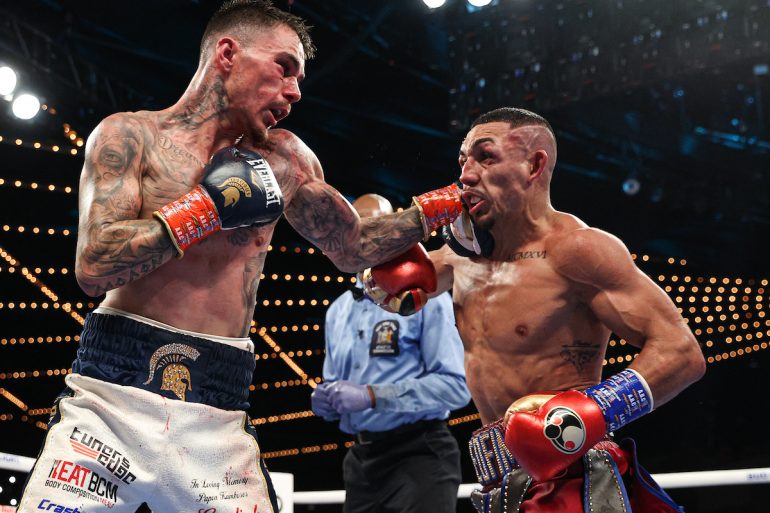 By the time lightweight champ Teofimo Lopez and George Kambosos Jr. finally got to the ring, most people were ready to put the fight in the books already. The bout, a mandatory defense for Lopez, had been moved to eight different dates and six different venues while switching broadcast platforms from Triller to DAZN.

The expectation was that Lopez, a 13-to-1 betting favorite, would dispose of the undefeated but unheralded Australian challenger, who was best known for being Manny Pacquiao’s sparring partner for three training camps. The momentum from the Brooklynite’s title victories over IBF beltholder Richard Commey and Ring champ Vasiliy Lomachenko had cooled off, but a win could put “The Takeover” back on course for significant fights in 2022.

It looked early on that Lopez may just end matters in a hurry. He rushed out of the corner looking to put Kambosos down, knockout written on each punch he threw. But Kambosos was able to avoid or roll with most of them, taking much of the effectiveness off the blows.

The first-round knockout that Lopez had in mind never came to fruition. Instead, it was he who was on the floor. With 15 seconds remaining in the round, Lopez threw a lazy jab that was countered by a right hand from Kambosos, producing the knockdown. Lopez rose almost immediately, an embarrassed smile on his face. The message had been sent, loud and clear, that Kambosos wasn’t going to be blown over as many had expected.

Instead it was Kambosos who was winning rounds, working consistently and evading most of the home run swings from Lopez. Still, Lopez never stopped being dangerous. By Round 8, Lopez began finding the target with his heavy right hands, and a series of rights hurt Kambosos late in the ninth.

The momentum had switched to Lopez, who came out for the 10th looking to bail himself out of an undisciplined performance. With two minutes left in the round, Lopez landed a pair of right hands that sent Kambosos to the canvas. In boxing terms, there was an eternity for Lopez to put Kambosos away, but the granite-chinned challenger stood up to the punches even as he attempted his own while stumbling away.

Lopez barreled forward, trying to land knockout blows with little setup to them. Against the odds, Kambosos made it out of the round.

The 11th began where the 10th ended, or at least it did in Lopez’s mind. But the previous round had emptied his gas tank, and his punch output dipped to a fight low of 32 attempts. The ensuing momentum swing was highlighted by a significant cut over Lopez’s left eye, which required an examination from the doctor mid-round. The blood reinvigorated Kambosos, who began targeting the cut with his right hand.

Lopez walked away dismissively at the final bell, while Kambosos offered him one last defiant push before celebrating. The consensus on press row was that, while Kambosos won the fight, Lopez was the bigger name and would get the decision. That fear was only realized on one of the scorecards, as the 114-113 score turned in by Don Trella was overruled by the 115-111 and 115-112 scores from Frank Lombardi and Glenn Feldman, respectively… (The full story, written by Ryan Songalia, will appear in the March 2022 issue of The Ring.)