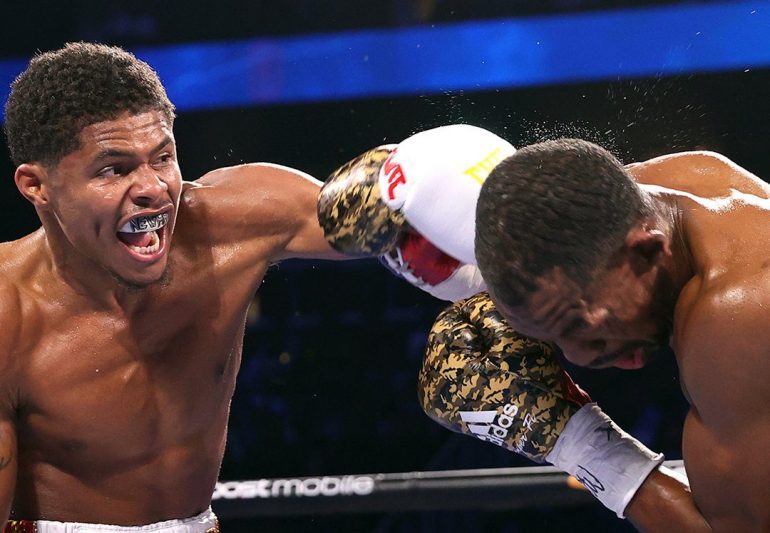 Although just 24 years old, Shakur Stevenson looked like a grown-ass man against Jamel Herring during their junior lightweight title fight on October 23 in Atlanta. Stevenson (17-0, 9 knockouts) pitched a virtual shutout through nine rounds, busting up the former Marine’s face, before referee Mark Nelson stopped the bloodbath in the 10th.

“I want to be a superstar in the sport,” Stevenson said moments after the bout. “I’m here to last. I take my craft very seriously. I’m disciplined.”

It wasn’t just that he beat Herring; it was how he beat Herring. Coming in, Stevenson had been criticized by some fans as a fighter who played it too safe, preferring to stay on his back foot and land pitty-pat pot shots that had little effect on his opponents. At the State Farm Arena in Atlanta, however, it was the complete opposite. He pushed Herring back from the opening bell, even manhandling him at times. His hand speed advantage was apparent throughout. CompuBox credited Stevenson with landing 164 of 530 total punches (31 percent), nearly doubling Herring’s output with a higher connect rate.

Shakur had made his point.

His virtuoso performance against Herring, who had won seven straight fights coming in, launched Stevenson into a new stratosphere. Now a two-division titleholder, Shakur is currently rated No. 1 at 130 pounds by The Ring and in great position for big things going forward. His goal is to unify his WBO belt with another junior lightweight title next year… (The full story, written by Michael Montero, will appear in the March 2022 issue of The Ring.)