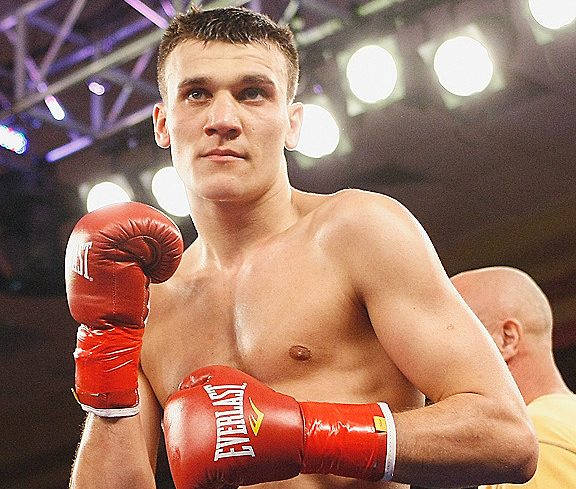 No scores were announced after the 10-round fight ended.

The 35-year-old dropped Valera midway during round 2. Valera was able to beat the count and was able to stun Vlasov during the following round before Vlasov was able to regain control of the action by outboxing Vlasov.

Vlasov dropped Valera with a combination of punches early in round 4. Valera was able to beat the count, but was dropped again, this time by a left hook to the body. Valera beat the count and was able to hold off Vlasov until the bell sounded to end the round.

Although Vlasov was the more effective fighter, Valera was game, even during the second half of the fight. After throwing and sometimes connecting with a punch or two, Valera would pound his chest with his glove.

A low blow by Valera in round 8 drew a warning and Vlasov needing a few moments to recover from the punch. A round later, Valera was deducted a point for again landing a low blow on Vlasov. Despite Valera showing heart and the ability to make it to the final bell, Vlasov was in control of much of the fight.

Valera, who resides in Santo Domingo, Dominican Republic, drops to 19-5, 16 KOs. The 33-year-old has split his last four bouts.

The southpaw Batyrgaziev connected on a lead left cross that dropped Manzanilla against the ropes. Moments later, the fight was stopped. It was an impressive over Manzanilla, who had lost to then-WBC junior featherweight titleholder Rey Vargas in 2019.

Manzanilla, who is originally from Los Teques, Venezuela and now resides in Barranquilla, Colombia, drops to 20-7, 19 KOs. The 33-year-old has lost four of his last six bouts.

Agrba, who is originally from Gagra, Georgia and now resides in Volgodonsk, Russia, improves to 7-0, 4 KOs.

Towards the end of round 3, the 26-year-old backed Petrov into a corner, unleashing a straight left hand, followed by a two-punch combination that dropped Petrov to the canvas. Petrov beat the count, but the fight was stopped.

Petrov, who is originally from Ryazan, Russia and now resides in Madrid, Spain, falls to 42-7-2, 23 KOs.

Heavyweight Muslim Gadzhimagomedov was successful in his pro debut, dropping Colombia’s Deibis Berrocal (17-9, 16 KOs) three times in round 2 before ending matters in round 3.

Gadzhimagomedov won a silver medal at this past summer’s Olympic Games in Tokyo.

Super middleweight Bek Nurmaganbet (6-0, 4 KOs) of Kazakhstan stopped Jose Torres of Colombia in the opening round. Torres, who resides in Magangue, Colombia, drops to 33-12, 27 KOs and has lost six of his last eight bouts.

Sergey Strelkov promoted the card, which aired live on Match TV throughout Russia.