Welcome to the Kambosos-Kahn Victory Tour 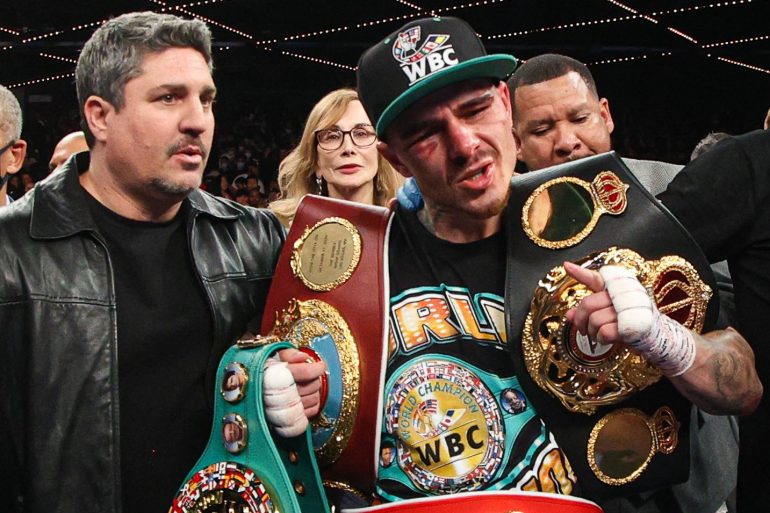 Fighters that pull off huge victories afterwards get lost for months, sometimes for even over a year before they resurface to promote their next fight. What new lightweight world champion George Kambosos and his manager, Peter Kahn, did earlier in December was quite the opposite—and a great template to follow for fighters who did what Kambosos did.

In the marketing world, it’s all about the bounce. Keep it going until it dies into a steady dribble.

For a week after Kambosos (20-0, 10 knockouts) wrested the WBA, IBF, WBC Franchise, WBO and Ring Magazine lightweight world title belts from Teofimo Lopez Jr. (16-1, 12 KOs) on Nov. 27 at the soldout Hulu Theater at Madison Square Garden, Kambosos and Kahn traveled around the country, logging 5,268 miles through the air in a week.

It’s what NBA and Major League Baseball teams do.

In modern boxing today, it was unprecedented. It’s what Muhammad Ali used to do.

Kambosos and Kahn hit Miami, after leaving New York. Then it was off to Las Vegas, then a stop in Los Angeles, then to Austin, Texas, for Joe Rogen’s highly popular podcast. You couldn’t miss them.

Since Becoming Champion Of The World Everyone Has Been Calling Me Out!! Even Burnie The @MiamiHEAT Mascot 🥊🔥🏀 Luckily I Sorted Him Out Too With My Beautiful Right Hand! Thank You @MiamiHEAT For The Custom Jersey! pic.twitter.com/0aRTgLRRko

But you couldn’t forget them.

Kambosos’ victory wasn’t a one-shot deal, where it was talked about for a day, maybe two after he won. The undefeated Australian of Greek descent kept himself in the public eye. He was seen at a Miami Heat game. He was there in Las Vegas for Devin Haney’s fight with JoJo Diaz a week later at the MGM Grand, followed by Gervonta Davis vs. Isaac Cruz the following night in Los Angeles. Wherever there was a camera and a few idle boxing writers, there was 28-year-old “Ferocious” Kambosos.

Kambosos and Kahn weren’t about to lose their momentum-bounce. They seized the bounce. They didn’t scurry into the ether. 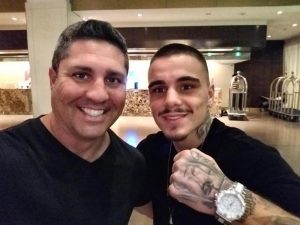 “I healed really quick after the fight, and that’s because of my diet,” Kambosos said. “I wish all the best to Teofimo and I hope he recovers from this.  I even sent him a video hoping he does well. But this is my time now, and I want to take advantage of it. Fighters have to take advantage of these times.

“I said it before the Lopez fight, we would take his belts and I would be there ringside for the Haney and Davis fights. I had the tunnel vision for the Lopez fight, and all of the sacrifices around us. My wife the most, because I have three kids at home. But I foresaw this coming and I wanted to take advantage of it after I won.

“I wanted to come out for the BWAA (awards) dinner and go back to New York for the (Vasiliy) Lomachenko-(Richard) Commey fight, but I have three young kids at home in Australia and I want to see them.”

Kambosos left for Australia on Tuesday, December 7, 10 days after his victory. His new baby son is 10 weeks old.

“George Kambosos Jr. is a throwback fighter, the way he lives, the way he trains, the way he prepares, and he’s smart and understands that he has to be visible,” said Kahn, who met and began working with Kambosos in 2017, going on a five-year journey. “George is very centered and very grounded. His work ethic is unmatched. When Xander Zayas trains, he models his work ethic off of George’s work ethic. That’s the impression he makes on everyone that trains around him.”

“George is doing a victory lap and he understands he has to see the people and he gets that. He’s well read and cerebral. It was his idea to do this.”

Kahn goes back to when Kambosos was making $15,000 for 10-round fights, the business mindset was there.

Peter Kahn, Manny Paquiao and George Kambosos in 2018 when “Ferocious” was sparring with Pacquiao.

It means time and effort. He didn’t want to be classified as an Aussie fighter who reached a ceiling and stopped there. Kambosos says part of his work ethic comes from his father, Jim Kambosos, and partly from working with all-time great Manny Pacquiao.

“I think I always had this business acumen, and part of the deal is the business side of things, especially at this stage having all of these beautiful belts,” Kambosos said. “My mentality and hunger have gotten to another level. I saw it firsthand when I saw the backlash of what Lopez received after our fight, and what Lomachenko received after he lost to Lopez.

“This is a business, and I want it to be a business and a championship reign that lasts a long time—and it will.”

Other fighters will need to follow the Kambosos-Kahn script—if they plan on cashing in on their success.

Boxing needs as many faces as it can get. Those faces often times go into hiding after they win—with the one exception being Canelo Alvarez, who the world knows. After Alvarez beat Caleb Plant in early-November to become the first undisputed world super middleweight champion, he stopped his security team coming out of the post-fight press conference and did what many in the media didn’t see.

Alvarez, spotting a legion of fans out of the corner of his eye, stopped the parade of those around him and waded into the crowd outside the MGM Grand media room. He spoke to about 500 screaming fans briefly in Spanish, thanked them for coming to the fight, he signed a few autographs and graciously spent about 10 minutes with them. He made himself tangible.

It’s exactly what Kambosos has done. He’s now tangible. It’s something the most famous fighter in the world, Muhammad Ali, did.

“The world is talking about me and I’m backing it up in the ring,” Kambosos said. “My goal is to continue working hard, staying humble. When you have that marketable ability, you need to grab it when it’s hot. You grab that audience now. They will have an interest in you and they’ll want to see your next fight.”

Kambosos plans on having his first title defense in Australia. The plan is for an April or May defense before 80,000 at Marvel Stadium in Melbourne, Australia.

“I’ve never been a part of a complete team effort like this, void of egos,” Kahn said. “This is a team bonded in trust and love. Then for George to go in and do what he did, it’s beautiful. This is just the beginning of something that’s going to last for a long while.”