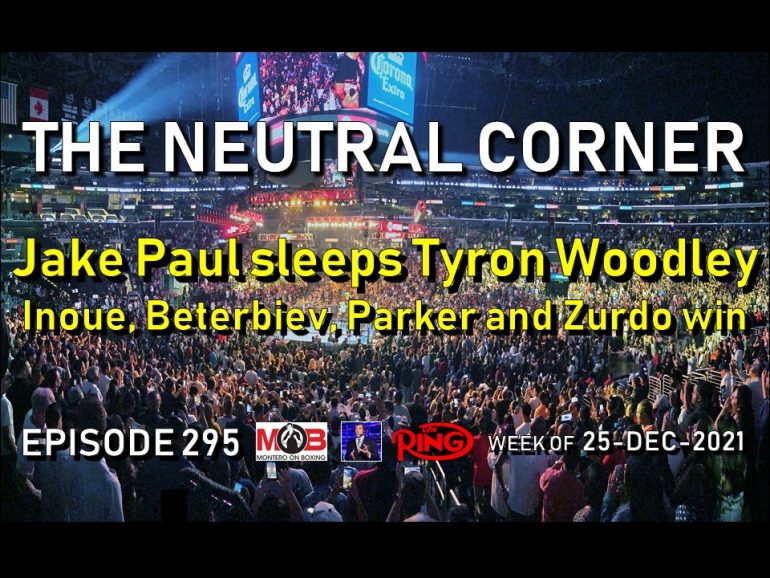 On episode 295 of The Neutral Corner boxing podcast, host Michael Montero reviewed a loaded week of boxing from around the world. He also gave his “best of 2021” nominations and took suggestions from the callers. Montero’s picks were as follows:

Last Tuesday, December 14, Naoya Inoue scored a TKO8 win in Japan and Knockout CP Freshmart scored a TKO5 win in Thailand. Both men defended their titles (118lbs and 105lbs, respectively) in their homeland.

On Friday, December 17, unified light heavyweight titleholder Artur Beterbiev scored a KO9 win over Marcus Browne in Montreal. In Uzbekistan, Israil Madrimov scored a very controversial TKO9 win over Michael Soro in a junior middleweight bout. There will likely be a rematch next year.

On Saturday, December 18, Jake Paul improved to 5-0 (4 knockouts) with a highlight reel sixth-round KO in his rematch with Tyron Woodley. Joseph Parker dropped Dereck Chisora three times, scoring a unanimous decision win in their heavyweight rematch. And Gilberto Ramirez scored a TKO10 win over Yunieski Gonzalez in a 175-pound title eliminator, setting up a fight between him and titleholder Dmitry Bivol in 2022.

“For fighter of the year, I’d have to give it to Canelo by default,” said Nacho. “Only because of his activity and what he accomplished. I would think that Usyk would be a close second. And for knockout of the year, it has to be Oscar Valdez stopping Miguel Berchelt.”

“I almost crapped my pants when you mentioned in last week’s show that Nigel Benn is not in the hall of fame,” said Thad. “He knocked out Iran Barkley in the United States in one round. He beat Gerald McClellan in the most brutal fight I’ve ever seen. The International Boxing Hall of Fame (IBHOF) should be called the American Boxing Hall of Fame.”

“The fight of the year was a no-brainer for me,” said Alex. “It has to be Estrada vs Gonzalez II. In terms of skill level, back and forth action and changes in momentum, it was easily the best fight of the year. The only thing I didn’t like about it was the decision. I thought that Chocolatito did more than enough to win.”

Chad from Canada had an interesting suggestion. “I don’t know if it counts as upset of the year because the fight ended in a draw, but maybe performance of the year. I feel that Brian Castaño should get an honorable mention for his performance against Jermell Charlo. Before that fight, nobody knew who Castaño was, they said it would be short work for Charlo. But Castaño showed a lot of heart and put in a lot of work that night.”

“For fighter of the year, I would lean toward Josh Taylor,” said Keith. “He cleaned out a much more competitive division than Canelo did. He just has a better resume recently. And for knockout of the year, I like Valdez-Berchelt. It was just so emphatic.”