Robson Conceição will take on Xavier Martinez on Jan. 29 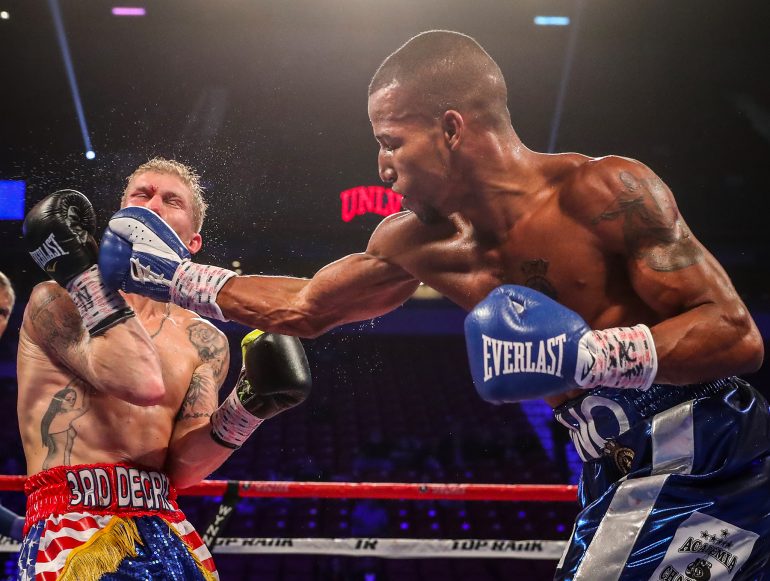 A lot will be on the line between Conceição and Martinez as the clash will be a WBC world title elimination bout. Both fighters are also ranked in the top 10 by The Ring at 130 pounds. Martinez and Conceição are ranked No. 9 and 10, respectively.

Conceição almost captured the WBC world title in his last bout on September 10, losing by unanimous decision in a close and competitive fight.

“This (Conceição -Martinez fight) has all the makings of a special, action-packed main event,” said Top Rank chairman Bob Arum. “Conceição nearly defeated the great Oscar Valdez for the title, while Martinez is a young kid hoping to make a name in the 130-pound division.”

Conceição (16-1, 8 knockouts), who resides in Salvador, Brazil, signed with Top Rank out of the 2016 Olympics, where he won a gold medal. He had fought and defeated modest opposition in the lead-up to the Valdez fight, including a knockdown and two point deductions in his win over former prospect Luis Coria on October 31 of last year.

The 33-year-old hopes a win over Martinez will lead to a rematch against Valdez or against another world titleholder.

“Nothing can stop me,” said Conceição, who suffered a close decision loss to Vasiliy Lomachenko in the amateur ranks in 2011. “Nothing can make me lose focus. I remain firm towards my goal of becoming a world champion. My last fight was just a minor setback. I’m going to make sure that all my hard work and sacrifices will not be in vain.

“I’m excited for the opportunity to be in the main event and to face an undefeated fighter like Xavier Martinez. I am sure we will give the fans a great show.”

Martinez (17-0, 11 KOs), who resides in Sacramento, California, recently signed a multi-fight deal with Top Rank. Over the last couple of years, Martinez had fought on ShoBox telecasts that were promoted by Mayweather Promotions.

The 24-year-old hopes to make a statement at the expense of Conceição on why he is one of the best junior lightweights in boxing.

“It was a dream to get a multi-year promotional deal with Top Rank and a shot to be the main event on ESPN,” said Martinez, who is managed by Rick Mirigian. “This is my chance to show the world I’m one of the best in the 130-pound division and work towards my goal of becoming a world champion under the Top Rank banner.”

A co-feature bout will also take place on the ESPN/ ESPN Deportes telecast.