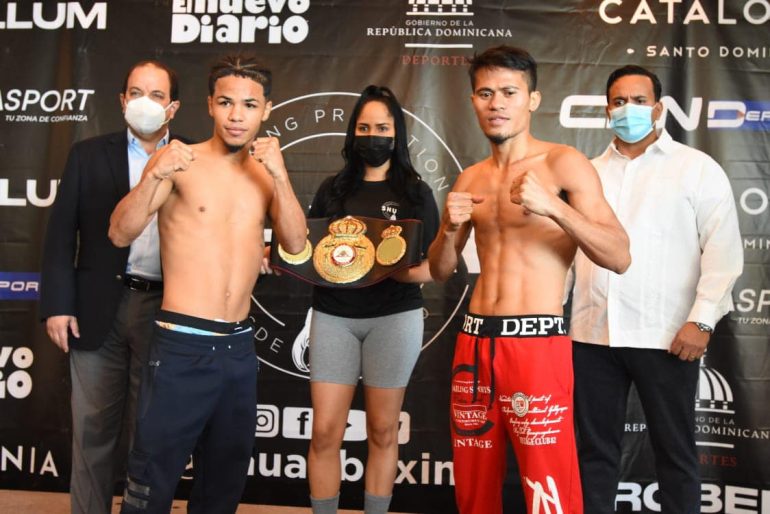 A convincing win by Erick Rosa tonight could put him as a legit contender at 105 pounds.

The 21-year-old Rosa will take a significant step-up in opposition. Saludar is ranked No. 5 by the Ring and is a former world titleholder at 105 pounds.

Rosa (4-0, 1 KO) has fought all his pro bouts in his hometown. In his last bout on July 21, Rosa overcame a knockdown in round 4 to defeat Ricardo Astuvilca of Peru by unanimous decision. In his previous fight on March 12, Rosa knocked out Venezuela’s Kenny Cano in round 3.

Promoter Belgica Peña is very high on Rosa and believes he can contend right away against any of the world titleholders in the division. Peña runs Shuan Boxing, which recently entered into an agreement with Probellum.

Saludar (21-4, 11 KOs), who resides in Cagayan de Oro City in the Philippines, defeated Robert Paradero by split-decision in his last fight on February 20.

Hard-hitting featherweight Frenchy Fortunato will square off against Alejandro Gonzalez (10-2-2, 6 KOs) of Mexico City in a 10-round bout.

Fortunato (12-1, 10 KOs), who is originally from Santo Domingo and now resides in Fort Lauderdale, Florida, knocked out Venezuela’s Cristian Avila in round 7 of his last bout on September 23. He has won his last two bouts since losing a close decision to Alberto Melian on March 27 in a fight that featured a total of seven knockdowns between the two fighters.

Gonzalez was victorious in his last bout on July 31, defeating Billy Stuart by majority decision in a clash of unbeaten fighters. The fight took place in Stuart’s hometown of Hamilton, Scotland. The 21-year-old has won his last three bouts since losing to once-beaten prospect Bryan Mercado on November 28 of last year.

Heavyweight Felix Parada (3-0, 3 KOs), who was born in Cuba and now resides in Santo Domingo, will square off against Francisco Silvens (23-3, 22 KOs) in an eight-round bout.

Junior featherweight Otabek Kholmatov (7-0, 7 KOs) will face Santo Domingo’s Anyelo Muñoz (18-20, 11 KOs) in an eight-round bout. Kholmatov, who is originally from Uzbekistan and now resides in Hollywood, Florida, made his pro debut on August 13.

Salvador Juarez (16-7-2, 4 KOs) of Mexico City will square off against Venezuela’s Renson Robles (17-8, 10 KOs) in an eight-round junior featherweight bout. Juarez has won his last four bouts, with two of those wins coming against unbeaten fighters.