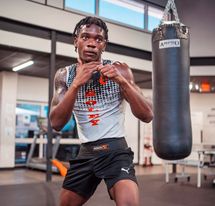 Darrelle Valsaint realized it was his destiny to become a fighter at age 9. Valsaint had been a problem child growing up, getting into fights and other trouble. After watching a Floyd Mayweather Jr. fight, he started wrapping his hands with toilet paper and promising his mother that he’d buy her a big house with the money he would make as a world champion.

“I had a lot of energy and wanted to put it into something positive. I’ve been on the right track with boxing. I feel that was my calling since I was younger,” said Valsaint.

The 19-year-old takes his next step towards that goal after signing with manager Tim VanNewhouse. For LaSaint, the decision came down to trusting the veteran dealmaker’s character and ability to put him in position for the right opportunities.

“I know he knows a lot about the game. He’s been around and he seems like a genuine person. And I feel like from the energy he gives me, he wants the best for me,” said Valsaint.

Valsaint, a 6’1” southpaw from Orlando, already had a head start on his pro career, turning pro in November of 2020 with a first round knockout win. He followed that up with a unanimous decision this past February before heading to Tokyo to represent Haiti in the Olympics.

There, Valsaint won his opening bout with a 4-1 decision over a Congolese opponent, before losing a decision to reigning AIBA world champion Gleb Bakshi in the quarterfinals. He was one of just six Olympians that Haiti sent to the 2020 Games, and was one of just two athletes from Haiti who advanced past their opening contest.

“It was big because I always wanted to represent my country. They don’t really have a anyone who is a leader or role model so I was really looking forward to being that guy. It was a beautiful feeling, having a whole country behind me,” said Valsaint.

“It’s always been a childhood dream going to the Olympics. Just seeing different athletes, I saw people that were 7-foot-5, I had never seen anything like that.”

Valsaint will be back in the ring on February 26 in Tampa, where he now is based and trains out of with Marc Farrait and Asa Beard. Among his gym mates are Najee Lopez, a 2-0 (2 KOs) cruiserweight prospect also signed with NewHouse.

For VanNewhouse, it was a combination of his boxing ability and his personality that drew him to the unbeaten prospect.

“He’s a boxer-puncher who can fight from the orthodox and southpaw stance. Plus he has power in both hands.”

A promotional deal is still to be announced. For now, Valsaint is just looking forward to getting back in the ring and taking another step towards the promises he made his mother as a grade school child.

“Having smaller gloves without headgear, you can see things better. I can’t wait for my next professional fight,” said Valsaint.