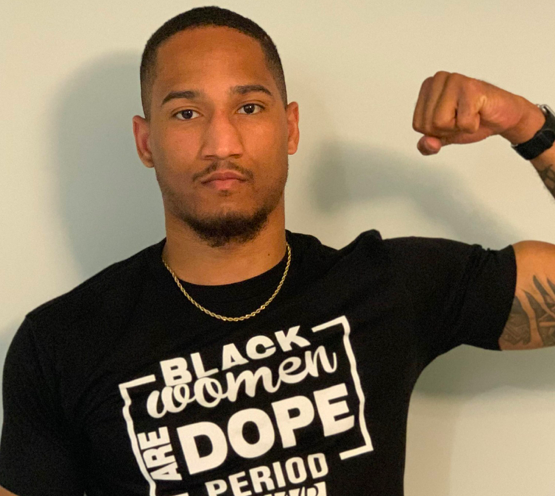 It’s not that it’s been an easy journey to get here, days away from being featured in the main event of a PBC card, against a younger gun athlete currently holding a title belt at 168 pounds. More like, it’s been the type of trek experienced by countless world-class pugilists who did well to reach a certain level. Alantez Fox (28-2-1 record, with 13 KOs) experienced a setback in the attempt to get over the hump, tweaked his game and set about to get back to a place where a win signifies a certain standing in the game. A victory against super middleweight titlist David Morrell on a card put together by TGB (Tom Brown) would represent a career best victory for the older and taller member of the Fighting Fox family.

In recent years, we’ve heard more from little brother Mykal (22-3 record), who like Tez is trained by father Troy. They all rep the District of Columbia-Maryland-Virginia (DMV) fistic region, and it was Mykal, who is 26 and toils at 147, who got a surge of ink when he battled Gabriel Maestre in a PBC main event on August 7. (That fight engendered more than a bit of controversy.)

Alantez Fox (who is listed at 6-4, to Mykals’ 6-3 1/2), meanwhile, got a taste of an uptick in interest when he fought Liam Williams in December 2019, with a more minor title up for grabs. (Neither man is in Ring’s top ten for 168s.) The Brit Williams prevailed, via stoppage, so it was left to Alantez to proceed forward so he could revisit the territory.

Fights got booked against Habib Ahmed and Marcos Hernandez in 2020, he got the Ws, and so Alantez strides to the Premier Boxing Champions ring Saturday night having last gloved up in June. Alantez Fox in early summer scored a stoppage win over Manny Woods, way down on a Minnesota card featuring Morrell doing a WBA crown defense against Mario Abel Cazares. (See Alantez vs Hernandez action below)

Alantez told RING that he’s confident about his chances at the Armory in Minneapolis, but not cocky, as we tick down to fight night. I put it to him, how has he found the sledding the last couple years, and where does he see himself and his career, big picture?

“These years have provided more strength, wisdom and great experience,” Alantez Fox told RING. “Every fight was a lesson. Win or loss. I think I’m better than I’ve ever been. Stronger than I’ve ever been. Just time to put the tools to good use. Big thanks to Al Haymon my advisor Mike Borao and my team here at home. Currently, I’m hungry in every sense of the word. This has been my life’s ambition and Saturday I’m looking to showing how much work we’ve put in through this camp and over the years. It’s our time. I’m excited to capture this title.”

And we wonder, how likely is that to happen? Many folks aren’t too clued in to who Morrell is, even though he holds a “world” title. The fighter grew up in Cuba, had a 130-2 amateur mark, and decided to get into the pro game in 2019. In his third fight, he vied for a vacant WBA title. His class is evident from right when you see him in action. His composure is like that of other Cubans with lots of experience tucked under their belt, he doesn’t get close to ruffled in his last outing when foe Mario Cazares tries to bully him, and catch him with a flurry. The lefty will stand tall, but change levels not by bending at the torso, but mostly by bending at the knees. His mobility is excellent, he has those sweet feet so many Cubans do. 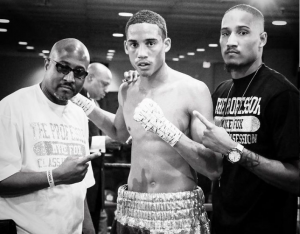 Trainer Troy, and lil bro Mykal have watched Morrell, and will advise Alantez on things to watch for on Dec. 18th. (Pic from Keystone Boxing archive)

Alantez Fox may see Morrell drop his hands, but will know that’s not an invitation to throw a bomb, but rather that he shouldn’t fall for the lure. Father/trainer Troy Fox will remind Alantez not to get sucked in, and also tell the ref to be on the lookout for trickery, like holding behind the head, and hitting. And whereas Hernandez, in Alantez’ last scrap, had trouble closing the distance and solving the long Fox jab, Morrell has quicker feet and a better command of real estate, so he will get in tight on Alantez, and so defense, blocking especially, will have to be on point for the DMV rep.

And why not, I asked Mykal to fill me in with a lil scouting report on Morrell: “Morrell is very offensive,” Mykal shared. “He’ll put the earmuffs on for defense but he’d rather be attacking. I think Tez is the best fighter he’s been in with and the experience and skills should show. We will also have to see how David deals with opposition that is taller. I expect him to lunge in and for Tez to counter.”

OK, and how is big bro’s body and brain heading into the clash? “He’s excited, motivated, and he’s been working hard,” Mykal continued. “He’s spent the last eight weeks preparing exclusively for the southpaw David.”

Wait, so does Alantez Fox think him versus Morrell is pretty much a 50-50 fight, on paper? “I mean, sure it is,” Alantez said. “Anyone can win on any day. I just don’t think my hunger and ambition will allow me to lose.”