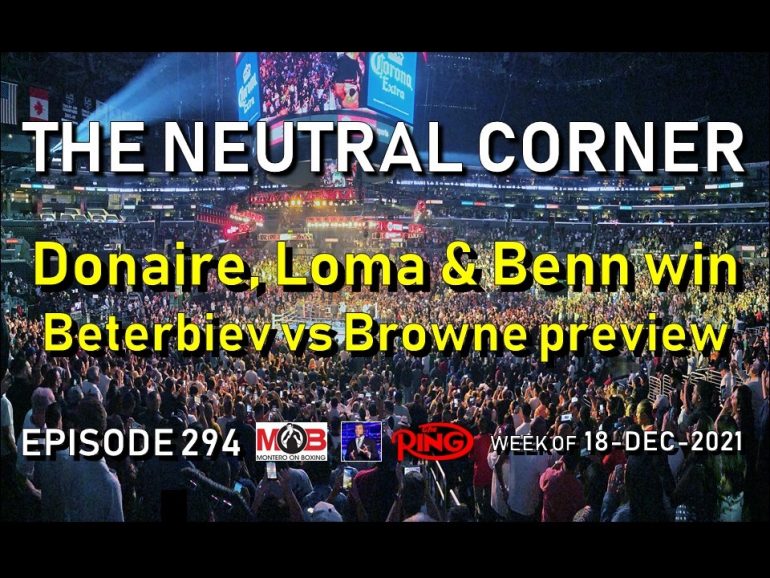 On episode 294 of The Neutral Corner boxing podcast, host Michael Montero reviewed an entertaining weekend of fights from around the world. He also previewed a loaded schedule coming up this week, with bouts featuring Naoya Inoue, Artur Beterbiev, Joseph Parker, Gilberto Ramirez and a slew of blue chip prospects.

In England, Conor Benn scored an impressive KO4 win over former titleholder Chris Algieri in a welterweight bout. In the co-main of the Matchroom Boxing card on DAZN, Katie Taylor defended her undisputed lightweight championship with a UD10 win over Firuza Sharipova.

In New York, Vasiliy Lomachenko dominated Richard Commey over 12 rounds in the main event of a Top Rank card on ESPN. In Los Angeles, Nonito Donaire defended his bantamweight title with a KO4 win over Reymart Gaballo in a PBC on Showtime main event.

“I did not buy this latest Tank Davis fight,” said Dane. “His team is behaving like they know more than me, like they know what I want to see. I’m not going to buy any Tank fights until he faces a top fighter.”

“One fight this weekend that is sneaking under the radar is Madrimov vs Soro,” said Nacho. “I think that’s going to be a really good fight. Soro is no joke, he fought Brian Castaño. He’s a really experienced guy.”

“I think it was a bad look for Lomachenko to not go for the kill against Commey,” said Thad. “I was watching that fight in a casino and everybody kind of felt the same way. It was kind of a buzzkill when Loma stopped throwing with bad intentions and the fight went to a decision.”

“Obviously, Kambosos is the man at lightweight for beating Teofimo Lopez,” said Rich. “But with Teo moving up to 140-pounds, and based on all the recent fights we’ve seen, Lomachenko is number one in the lightweight division in my opinion.”

“Dmitry Bivol fights down to the level of his competition,” said E’san. “But I think when he gets in the ring with a guy who will come at him, like Zurdo Ramirez, he’s going to be much more aggressive.”