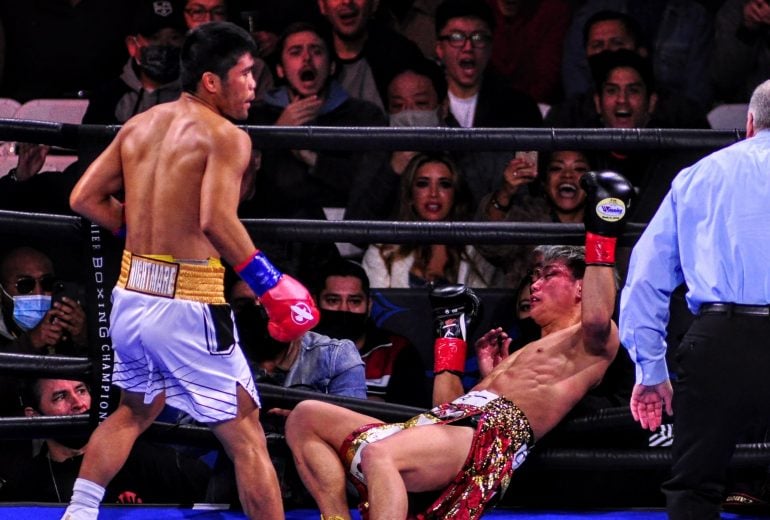 Tapales, of the Philippines, improves to 35-3, 18 knockouts.

Both fighters were coming off significantly long layoffs with each having not fought in over a year. Not only was Saturday Teshigawara’s first fight in the United States, but it was the first time he had fought outside of the famed Korakuen Hall in his hometown of Tokyo, Japan.

Having fought the better opposition between the two, Tapales landed the more-telling punches during the opening round. A left uppercut followed by a barrage of punches hurt Teshigawara to where the ropes held him up, prompting referee Jack Reiss to correctly call for a standing 8-count. After Teshigawara beat the count, a right cross to the head dropped Teshigawara again. Teshigawara was able to get up on wobbly legs and the bell sounded to end the round.

Tapales charged out of his corner to start round 2, throwing and landing another right cross to the head that dropped Teshigawara flat to the canvas. Reiss immediately waved the fight off at 6 seconds.

The 29-year-old Tapales, a former WBO bantamweight titleholder, has now won 14 of his last 15 bouts with the line blemish being a knockout loss to Japan’s Ryosuke Iwasa in December 2019.

The action between Tabiti and Williams featured more grappling and holding than fighting during the first couple of rounds. Moments into the opening round, as referee Gerard White called for a break during a clench, Tabiti threw and landed a punch. Williams immediately retaliated and landed a left hand to the head, dropping Tabiti, who was not hurt. White admonished both fighters.

Both fighters threw very little punches as they spent most of the fight grappling one another. Tabiti would smother himself as Williams would immediately clench on the inside. Towards the end of round 4, Williams was deducted a point by White for hitting on the break.

Over a minute into round 5, Tabiti landed a barrage of punches that dropped Williams to the canvas. Williams remained on one knee and as he stood up before the count of 10, White waved the fight off at 1:20, drawing protests from Williams, who drops to 16-9-3, 11 KOs.

Tonight marked Clayton’s first fight since fighting to a majority-decision draw against Sergey Lipinets on October 24 of last year. Clayton was the more-effective fighter throughout most of the fight, varying his attack to Krael’s head and body.

Fringe junior welterweight contender Bryan Flores Favela knocked out Tyrone Luckey (15-16-4, 11 KOs) of Galloway, New Jersey at 2:49 of the opening round. Flores, who resides in Mexico City, improves to 31-2-1, 18 KOs.

In the opening bout of the Premier Boxing Champions (PBC) card, junior welterweight Jesus Silveyra Carrillo improved to 10-6-2, 4 KOs by knocking out Tijuana’s Miguel Perez Aispuro (12-11-2, 8 KOs) at 2:39 of Round 2.