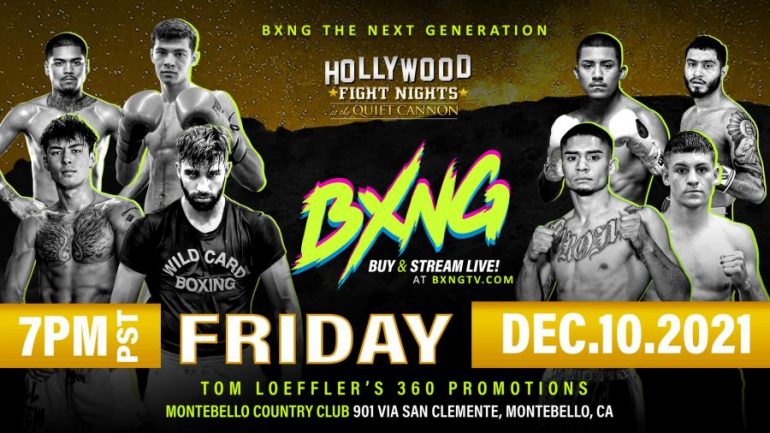 Ali Akhmedov returns to action tonight in a stay-busy fight.

The hard-hitting super middleweight will face Paul Valenzuela Jr. at Quiet Cannon Country Club in Montebello, California. The 10-round bout will be part of a “Hollywood Fight Nights” card that will stream live on BXNGTV.com (10 p.m. ET/ 7 p.m. PT).

Akhmedov (17-1, 13 knockouts), who is originally from Almaty, Kazakhstan, and now resides in Venice, California, faced Ecuador’s Carlos Gongora in a clash of unbeaten fighters on December 18 of last year. Akhemdov was in control of most of the fight but was stopped by Gongora during the final round of the bout. At the time of the stoppage, Akhmedov was up on all three judges’ scorecards.

After taking time away from the ring, Akhmedov returned to action on September 16, winning by knockout after Round 3 when opponent David Zegarra remained on his stool.

The 26-year-old is promoted by Tom Loeffler and trained by Johnathon Banks.

Valenzuela (26-10, 17 KOs), of Santa Rosalia, Mexico, lost by unanimous decision to unbeaten D’Mitrius Ballard in his most recent bout on November 13. His most notable losses of late have come against Steven Butler, Khasan Baysangurov, Jaime Munguia and Tony Harrison.

In the final bout of the evening, unbeaten Adrian Corona (8-0, 2 KOs), of nearby Rialto, the son of referee Ray Corona, will square off against Jesus Perez in a six-round lightweight bout.

Cruiserweight Marco Deckmann (6-1, 5 KOs), who is originally from Germany and now resides in the Los Angeles suburb of North Hollywood, will face Miami’s Santario Martin (4-5, 2 KOs) in a six-round bout. Deckmann is trained by Freddie Roach.