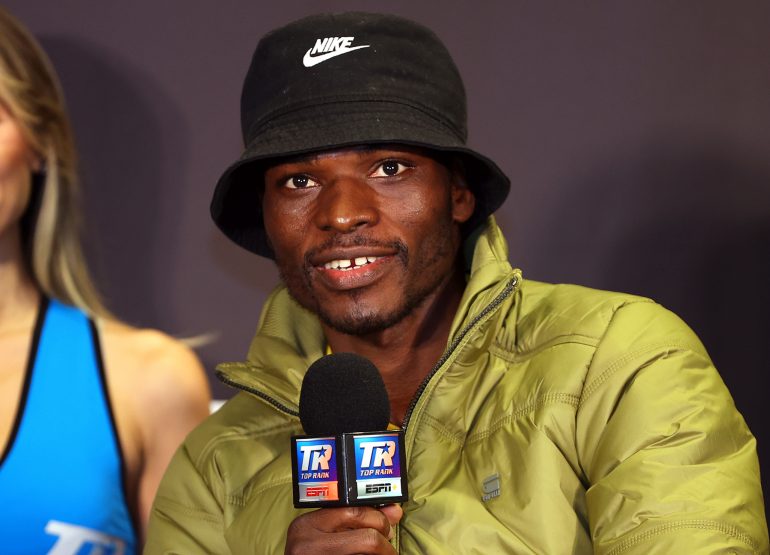 Richard Commey’s experience in boxing has gone from the highest of highs to the lowest of lows.

The high was when he destroyed Isa Chaniev in the second round to win the vacant IBF lightweight world title in February 2019 and successfully defended the belt with an eighth-round knockout of Ray Beltran four months later.

The lowest of lows was when he got knocked out in the second round of his second title defense and lost the belt to Teofimo Lopez in December 2019.

Through it all, Commey maintained an even keel. Never too high, never too low.

“This is boxing and these things happen,” Commey told The Ring about his title loss. “There’s more life after sports. Whatever happens in the ring stays inside the ring and you just have to let it go and regroup and come back again. It happened with Teofimo and I didn’t really expect for something like that to happen. But God knows what he does. You just have to take it like a man, focus and come back strong. And that’s what I did.”

Indeed, following the loss to Lopez, Commey did not fight at all in 2020, idle like many boxers because of the coronavirus pandemic.  When he finally got back into the ring this past February he looked sharp, knocking out fringe contender Jackson Marinez in the sixth round inside the Top Rank “bubble” of the conference center at the MGM Grand, where Top Rank put on regular ESPN events without fans.

“After the Teofimo fight I went back home and I talked to my people and they still had my back,” said Commey, currently rated No. 5 at lightweight by The Ring. “My people were like, ‘don’t worry, don’t let it bother you. It happens.’ Knowing my team and my people are always behind me regardless of what happens — it helped me come back strong.” 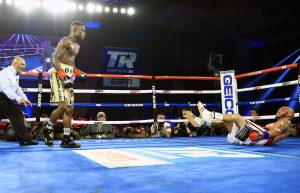 Commey scored four knockdowns of Beltran before the fight was stopped. Photo by Mikey Williams/Top Rank

The victory over Marinez put Commey in position for another major fight, albeit a non-title encounter, when he faces former unified champion and former pound-for-pound king Vasiliy Lomachenko, who is rated No. 2 by The Ring in the 135-pound division.

They will meet in the 12-round main event of the Top Rank Boxing on ESPN card on Saturday (ESPN, ESPN Deportes, ESPN+, 9 p.m. ET) at Madison Square Garden in New York, where the main arena will be hosting its first boxing event in two years due to the coronavirus pandemic.

The fight culminates a three-week stretch of four major lightweight fights. First, there was George Kambosos Jr. winning a split decision over Lopez in a major upset to take The Ring championship as well as the unified sanctioning body belts in a contender for fight of the year on Nov. 27 at the Garden’s Hulu Theater.

Now, it’s back to New York for Lomachenko-Commey.

“I’m very excited. This is a big fight,” Commey said. “I’m happy to again fight in New York and ready to get in the ring for another big fight for me. Back in the ring at Madison Square Garden for the second time. It’s an honor to be in there.”

The fight will take place in the same ring in which Commey (30-3, 27 KOs), 34, of Ghana, got knocked out by Lopez, but he anticipates different outcome against three-division titleholder Lomachenko (15-2, 11 KOs), 33, a southpaw from Ukraine and two-time Olympic gold medalist, who lost his unified title to Lopez by decision 13 months ago.

“He’s been beaten twice but he has good skills, nice skills,” Commey said of Lomachenko, who rebounded from his loss to Lopez with a one-sided ninth-round knockout of Masayoshi Nakatani in June. “But I feel I can do whatever it takes to win. He’s lost twice and I’ve lost three times, so it’s a great matchup and anything can happen. He’s a great fighter and I am looking forward to the fight and to fighting again at the Garden, where I lost my title. This is my opportunity to get back, to equalize it.”

Lou DiBella, who promotes Commey, knows how important the fight is to Commey, whose only other losses were disputed split decisions in 2016 to Robert Easter Jr., who Commey knocked down twice, for the vacant IBF title, and Denis Shafikov in a title eliminator on Shafikov’s home turf in Russia .

“It’s everything to him,” DiBella said. “He wants the big spotlight again. He wanted another bite at the apple at the Garden. He wanted to prove himself again. I think he got his confidence back with the last fight against Marinez and the knockout with Marinez I think gave him the confidence to want this fight badly and put him in a head space where he believes he can win.”

DiBella added that that Commey’s whole team – himself, co-managers Keith Connolly and Michael Amoo-Bediako as well as trainers Andre Rozier and Gary Stark – have always liked the matchup with Lomachenko. 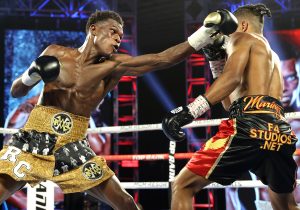 “Theres’s always been a belief that he matched up pretty well with Lomachenko from the standpoint of length, power and height. Just the size is big factor for Commey,” DiBella said. “So, it’s a fight the team always wanted and for him this everything.

“He really views himself as a representative of Ghana, like a poster child for his country, and Lomachenko is one of the biggest names in the word in boxing, so he views a win as another opportunity for him to elevate himself and his country.”

If the belief that Commey could beat Lomachenko was there before the lightweight run of fights began last month, DiBella believes Commey is even more confident after seeing Kambosos upset Lopez.

“Commey is one of the best lightweights in the world already, and then you have Kambosos’ win and it’s a motivating factor to him. He’s going into the fight saying, ‘Here we go again. They’re looking past me,’” said DiBella, who also promotes Kambosos. “And then there’s all the talk of Lomachenko asking for a fight with George already before he even gets in the ring with Commey. I think Commey’s thinking that he can upset the apple cart the way Kambosos did.

“Clearly, Loma and (manager) Egis (Klimas) are already looking past Commey, and I guess I understand that. Commey’s an underdog but he’s focused on Loma. But you can bet your bottom dollar that if Commey were to pull off the big upset, the second after the fight ends the first thing on his mind’s going to be George Kambosos.”