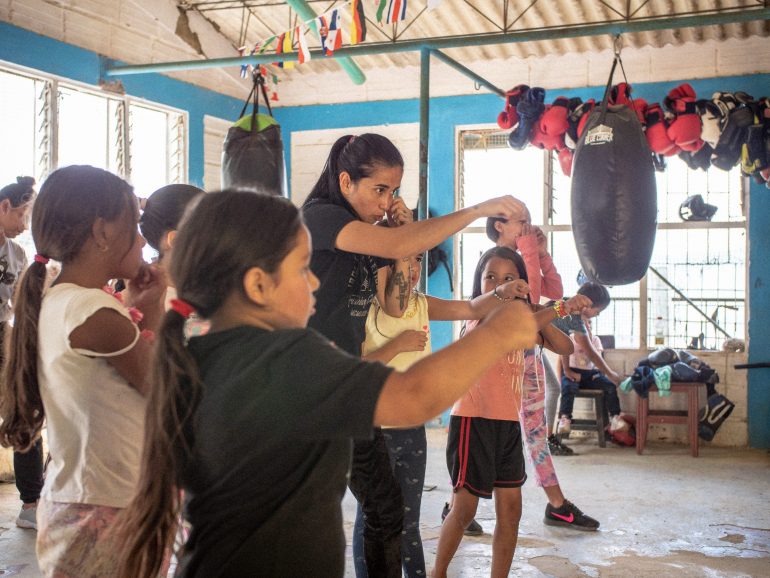 Trainer Verónica Vidales shows a punch to some of the girls of Box2Grow. Photo from Box2Grow
06
Dec
by Ryan Songalia

The road to Manrique La Honda is among the most difficult to navigate in Medellin, Colombia. It’s nearly a one hour journey in the hills to reach the invasion, or informal settlement. The barrio was started 20 years ago and is home to nearly 1,000 families, some of whom live in extreme poverty, surviving on less than a dollar a day. Some are refugees from the political strife in Venezuela, or are indigenous people who have been displaced, or are fleeing violence in their homes.

The homes are built from discarded plastic and wood. The community only received access to electricity, roads and running water three years ago.

Many of the women there are victims of physical and sexual abuse, with few prospects for gaining financial independence to break the cycle of violence.

This is where Andrea Gonzalez decided to set the roots for her non-profit organization, Box2Grow, a boxing training project aimed at empowering some of the country’s most vulnerable women. The program, which arose from her foundation, Volunteers in Colombia, teaches boxing skills and physical conditioning twice a week, as well as social and emotional skills training every 15 days, educating the participants about women’s rights, self esteem and relationships.

Box2Grow was founded in February of 2021 and has close to 50 participants, ranging from ages 7 to 65.

“What we see right now with the women is more discipline, they come on time, they connect better with themselves, who they are as a person. They also have improved self esteem,” said Gonzalez, 32, of the program, which is coached by two members of Medellin’s amateur boxing team: Diego Beltran, who trains the teenagers and adults, and Verónica Vidales, who trains the youngest participants up to age 12.

“In the beginning it was like, ‘No I cannot do this, I’m not strong enough, I cannot run five miles,’ but now they can. They see what their bodies can do so their attitudes are different, now they are not saying, ‘I cannot do it. They’re saying OK let’s try.’”

That shift in attitude makes a big difference, not just in the gym but in life as well, Gonzalez says. She notices an uptick in their self respect and empathy towards others. The gym also provides a safe environment where the women can seek support from one another if they need help leaving an abusive or exploitative environment.

For Gonzalez, helping the women of this community is a personal issue. Born in the country’s capital of Bogota, she was adopted at six months old by a family in Ijlst, the Netherlands after her biological mother was a victim of domestic abuse. She moved to Curacao, an island off the coast of Venezuela, after completing her social work degree, and then relocated to Medellin, where she looked more like the average person than where she had grown up in the Netherlands’ countryside.

She founded Volunteers in Colombia, working as the conduit between international volunteers looking to connect with smaller, localized non-governmental organizations. She began assisting the underserved La Honda area during the COVID-19 pandemic, soliciting donations to provide food packages for those in need. The women she connected with were grateful for the assistance, but also were in need of recreational activities to engage their minds and body.

“A lot of the time the women are only sitting in their house, not doing much, feeling disconnected from the neighborhoods. Violence and sexual violence, it was already bad but during the pandemic and lockdown the numbers were only getting worse,” said Gonzalez.

The program’s success is measured more so in its emotional impacts instead of trophies. There are success stories like Ximena, a 12-year-old girl who had difficulties controlling her rage at first, but now has better control of her emotions and can focus better on her school work. Then there’s an 11-year-old girl identified under the pseudonym Juanita, whose family fled their village six years ago due to armed conflict. She had feelings of abandonment after her mother took a job selling ice cream in Medellin’s city center, but has learned to connect better with her community through boxing.

Some of the women have begun sparring, testing their limits in competition with one another. They hope to enter some of the women into tournaments next year, but that requires funding for the program. Box2Grow receives no funding from the Colombian government, and made it through its first year thanks to donations from Gonzalez’s friends and family.

A GoFundMe page set up in October has raised €5,425 towards its €25,000 goal. The women are also in need of equipment and gear for their training, like gloves and hand wraps, which can also be donated.

The women can take inspiration knowing that one of the greatest female professional boxers ever, Cecilia Braekhus, was also born in Colombia. But even if they don’t become fighters, the program is helping them win rounds in life.

“I really like boxing because it takes a special attitude. I never had doubts about boxing because I know what it can do for your mind and body,” said Gonzalez, whose foundation also offers classes for women to learn English, or how to cut hair, or become baristas through its Un Paso Adelante program.