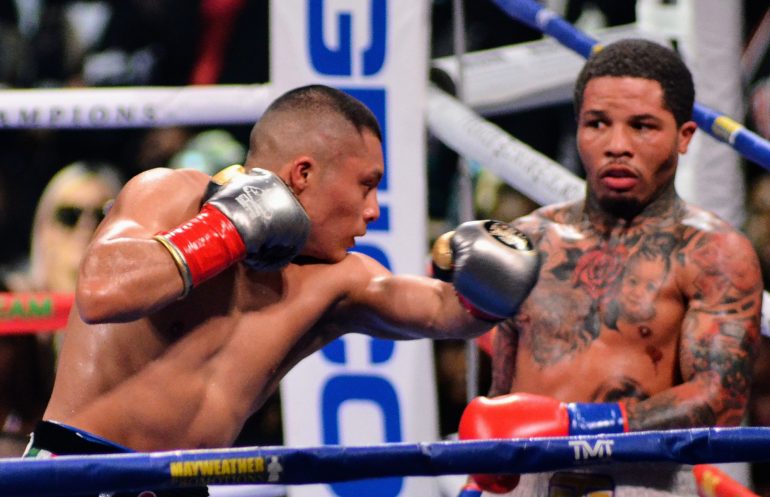 Gervonta Davis had to rely on ring savvy to earn a close decision over Isaac Cruz. Photo by German Villasenor
05
Dec
by Michael Montero

Gervonta “Tank” Davis faced some adversity but fought well enough to score a unanimous decision over Mexico’s Isaac “Pitbull” Cruz on Saturday in Los Angeles. The judges scored the Showtime PPV main event 116-112 and 115-113 twice for the Baltimore native.

Davis (26-0, 24 knockouts), who went the 12-round distance for the first time in his professional career, injured his left hand somewhere in the middle rounds.

“I hurt my left hand in probably the sixth round,” he told Showtime’s Jim Gray after the fight. “It is what it is, that’s what comes with the sport. I felt that later in the fight, he was breaking down, but I hurt my hand so I couldn’t get him out of there.”

When asked about a possible rematch, Davis immediately responded, “hell no.” When asked about facing the elite lightweights that fans have been dying for him to face, he deflected and avoided the question. “All them guys is easy work. I’m the top dog.” 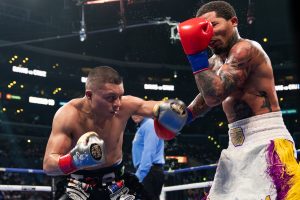 Cruz lived up to his “Pitbull” nickname. Photo by Ryan Hafey / PBC

Cruz (22-2-1, 15 KOs) had won over the diehard fight fan portion of the crowd inside Staples Center. They cheered for him when it was it was his turn on the mic. “A star was born tonight,” he said during the post-fight interview. “The fans are speaking on who won this fight.”

“Pitbull is always going to be on the attack, always pressuring. I think I maintained the rhythm right from the start to the end of the fight. And if the fans want a rematch, I want it.”

Cruz came out swinging from the opening bell, letting the heavily favored Davis know that he would not be intimidated. Cruz, who replaced original opponent Rolando Romero after he withdrew due to legal issues, was able to land plenty of hard body punches that got Tank’s attention early on. Davis meanwhile showed a lot of movement, attempting to set up big counters.

In the middle rounds, Tank stepped up his aggression. The southpaw landed several counter uppercuts and hooks that delighted the celebrity fans in attendance. The power punches were freezing Cruz at times and limiting his offensive output as well. Suddenly it felt like Davis could be taking over, but Cruz battled back and did some great work in the championship rounds. There was nervous tension in Davis’ corner before the scorecards were read. Many in attendance felt a draw was possible. 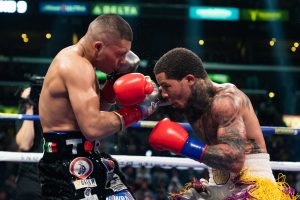 Davis and Cruz made for a hotly contested 12-round lightweight bout. Photo by Ryan Hafey / Premier Boxing Champions

Punch stats revealed just how competitive this fight was. CompuBox credited Davis with landing 133 of 462 total punches (29%) and Cruz 121 of 553 (22%).  Neither man scored with the jab much, as Davis landed 20, compared to just 9 for Cruz. But Davis was the more accurate puncher in every punching category.

So where do both men go from here?

Cruz entered tonight’s bout rated ninth at lightweight by The Ring, while Davis is currently rated sixth at junior welterweight. It’s difficult to know where exactly to rate Tank; he’s become the most frequent weight-jumper in the sport. Earlier this year, he fought Mario Barrios at 140 pounds. His fight before that was at junior lightweight against Leo Santa Cruz. Tonight, Davis returned to the lightweight division, where he hadn’t fought since his late TKO win over Yuriorkis Gamboa in 2019.

Promoter Floyd Mayweather made a big stink about fans and media “hating” on his protégé earlier this week. But that’s nonsense. The fact is, Davis has yet to face an elite fighter in his prime and at his natural weight. Several of the top lightweights have fought each other recently. A fight between Ring Magazine/unified champion George Kambosos Jr. and WBC titleholder Devin Haney, which would crown an undisputed lightweight champion, is very possible for early next year. Fans are excited to see Tank fight, he’s a proven ticket seller, but want to see him face the elite.

Meanwhile for Cruz, his life has certainly changed. He will undoubtedly be back in the ring in a big fight soon. He earned that right with his better-than-expected performance against Davis.