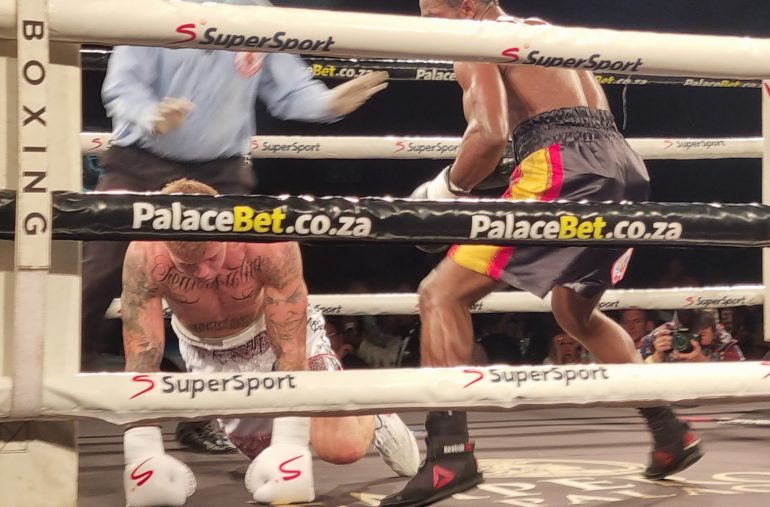 GAUTENG, South Africa – In a nail-biting shootout Saturday night at Emperor’s Palace, Roarke Knapp got off the floor four times to prevail when Cristiano Ndombassey retired in his corner at the start of the fifth round. It was not without controversy though, but more about that later.

The 10-round middleweight main event got off to a slow start with both men feeling each other out in the opening round. Knapp turned on the heat in the second round, finding a home for his jab and from that, the combinations started to flow. Knapp banged away to the body, throwing his left hook to the liver Mexican style, then went to the head. He landed a hard right towards the end of the round and it seemed that an easy win was moments away. Ndombassey was oddly passive, only offering the odd right in return.

Then the third round came and all hell broke loose.

The Cape Town based Angolan was clearly a man with a plan, waiting for his moment. He suddenly exploded with two successive left-hook right hand combinations which found their mark. Moments later he nailed Knapp with a perfect straight right. The punch landed bang on the chin, swiveling Knapp’s head around. His body twisted and he went straight down. It was one of those brutal knockdowns where no one would have complained had the referee waved it over without a count. How he did it, only he knows, but somehow Knapp barely made it to his feet. The fight continued and with Knapp’s legs clearly not back under him, another two rights sent him back to the canvas for a second knockdown. He made it back to his feet but went down again. This time it was ruled a slip. He got up but Ndombassey kept after him and yet another pair of right hands knocked him into the ropes where he slid to the canvas for the third official knockdown. Somehow, he got to his feet and saw out the round. The bell did not come a moment too soon.

The fourth round started with heavy exchanges. Knapp seemed to have recovered somewhat in the rest period and appeared to be fighting himself out of the fog. Ndombassey landed more rights, but it began to look like the last-minute substitute emptied his tank in the previous round. Knapp fought back like a tiger and a series of rights backed Ndombassey into his corner. Knapp let his hands go and now the tables were turned. He rained down punches on Ndombassey, both to the body and head. Double left hooks, uppercuts, overhand rights, whatever he had in his arsenal, he threw it.

Ndombassey was staggering but remained on his feet until the bell sounded.

Then, suddenly, as violent as the storm raged, it was all over. The bell rang for the fifth, Ndombassey got up off his chair, walked over to Knapp, said something to his opponent, walked back to his corner who threw a towel into the ring and quit. It was an anti-climactic end to a terrific fight.

Then the controversy started. In all the excitement, everyone seemed to have forgotten that the fight took place under WBA rules (one of their regional belts was at stake). As such, the three knockdown rule was in effect. In that case, referee Tony Nyangiwe erred badly by not waving the fight over in the third round, costing Ndombassey the victory.

Asked by the writer why he quit, Ndombassey said, “I already knocked him out in the third. They were going to rob me no matter what I did. So I decided if they want him to win so bad, let him win.” His livid trainer, Emile Brice, along with his promoter, Jack Brice, promised to lodge a protest with the WBA.

Ndombassey did decide to call it a day after the fourth round when he was under fire, not after the third round but then again, rules are rules. One will have to see in the coming weeks where that will lead, if anywhere.

Roarke Knapp showed the heart of the lion, coupled with amazing recuperative powers and conditioning. One has to give him all the credit in the world for coming back the way he did.

Still, you must be absolutely heartless not to feel for Ndombassey who came so close to a monumental upset. 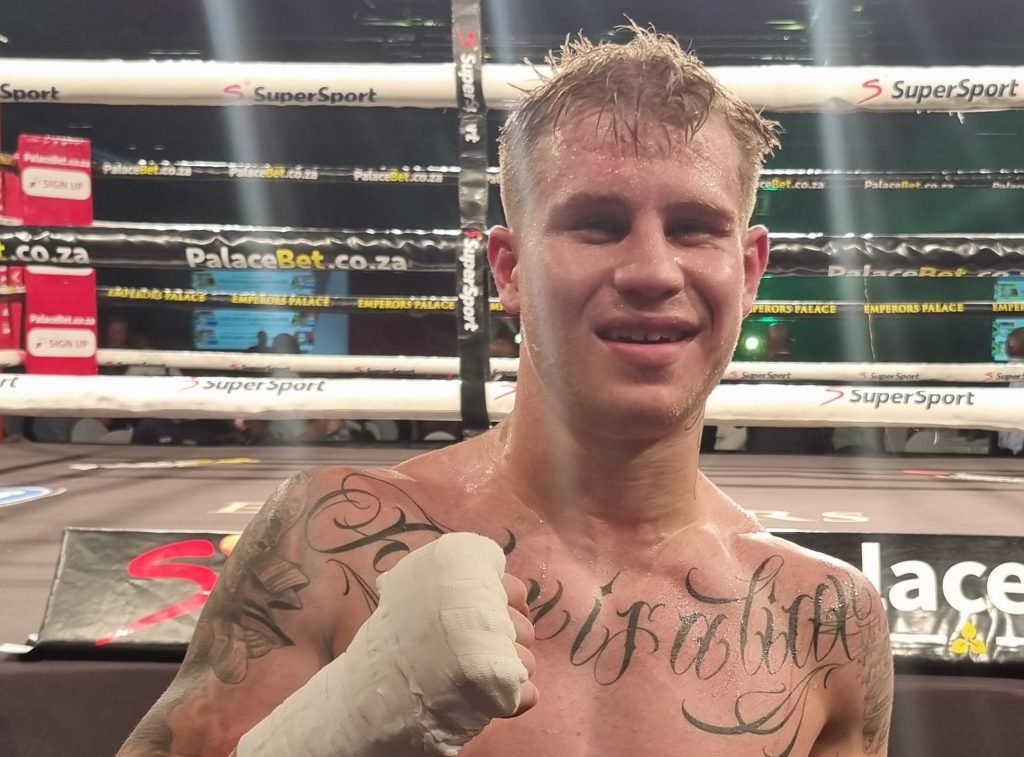 The heavyweight bout that preceded the main event lasted less than a round but provided the same edge of your seat action. Juan Roux kept his “0” intact by knocking out Wilhelm Nebe at the 2:17 mark of the first round.

Nebe, returning to his wild slugging style, came straight at Roux at the sound of the bell. A hard right knocked Roux to the ropes but he kept his focus and blocked what he could with his arms and gloves. Roux, who was at a height and reach disadvantage, rolled with the punches, and landed a short left hook which Nebe shook off. Nebe kept throwing bombs, clearly intent on ending matters early.

Roux showed impressive poise, keeping his cool and moved inside of Nebe’s punches. Once he got close, he returned fire until a terrific pair of straight rights that put Nebe in the corner. He rattled off non-stop left hook-right hook combinations flush on Nebe’s jaw, who tried to return fire with a pair of last-ditch punches that only found air. After that, Roux banged in another 17 unanswered punches until Nebe toppled to the canvas, referee Tony Nyangiwe (who also worked the main event) waving it over.

Going into the fight, Roux, who is now 5-0 (2 KOs) and scored his second knockout, was not considered the puncher. He proved everybody wrong. Nicknamed “The Rhino,” Juan Roux was destructive and simply slayed Nebe, who is known as “The Dragon” and drops to 5-2 (4 KOs). 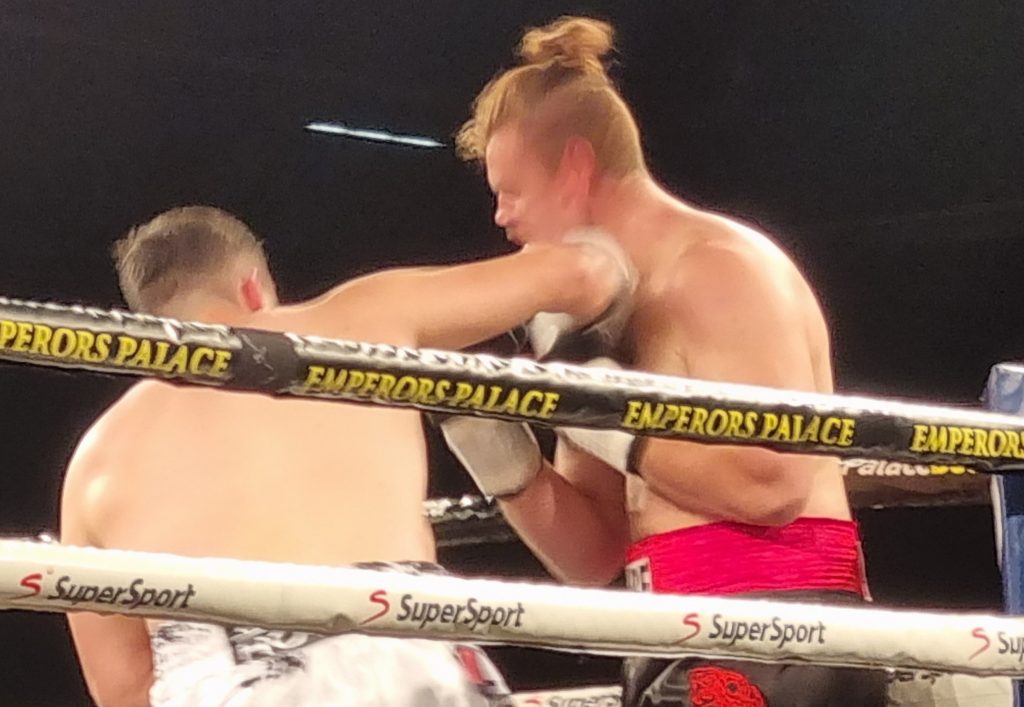 Junior middleweight, Shervontaigh Koopman, is another fighter who kept his unbeaten record intact, winning a unanimous 10-round decision over Henriques Lando by scores of 98-91, 97-92 and 96-93. He had to work hard for it though. Lando, as always, came to fight.

Koopman got off to a good start, boxing behind his jab, landing the odd straight right to the body and stepping out of the way of Lando’s attacks.

After he easily banked the first two rounds, Koopman picked it up in the third. He found a home for his left hook, opening a gash above his opponent’s right eye and banged in a right to the body followed by a combination to the head.

In the fourth round, an intense exchange ensued in the corner. Although Koopman got the better of it, Lando also landed a good left hook and a chopping right that forced Koopman to regroup.

That was the story of the next four rounds. Perhaps realizing he had to do something to stay in the fight after the doctor took a long look at his cut in the sixth round, Lando kept fighting back and had some success. Koopman simply landed the more telling blows. His defense was also slightly better than that of his opponent, who kept taking shots to land his own.
Lando had a good ninth when a right towards the end of the round buckled the knees of Koopman, forcing him to hold on.

Lando pushed hard in the 10th and went for broke, but it was too little too late. Koopman took what Lando managed to land and got on his bicycle in the last moments of the fight.

Koopman will need to close some defensive holes, but his development has been steady. He has emerged as one of the country’s top prospects in 2021.

In the opening bout, southpaw middleweight, Phikelelani Khumalo won a unanimous six-round decision over Thembani Mhlanga by scores of 59-55, 58-56 and 58-55.

Mhlanga had some success on the inside, but the telling blows were landed by the more polished Khumalo, who now moves to 4-0 (2 KOs) while Mhlanga drops to 3-6.

The card, which saw a limited live crowd return for the first time since the pandemic started, was presented by Rodney Berman’s Golden Gloves Promotions.