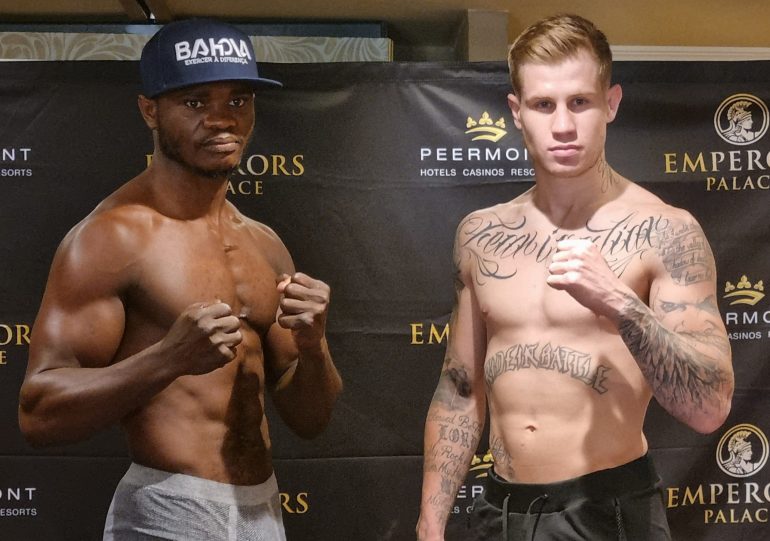 With the COVID19 pandemic seemingly heading towards a fourth wave, Golden Gloves Promotions had to pull out all the stops to keep Saturday night’s card at Emperor’s Palace in Gauteng, South Africa alive. This will be the first time that a limited crowd of 750 will be allowed to attend.

Roarke Knapp has rebounded impressively from his only career defeat to Brandon Thysse in 2019. He has scored three consecutive stoppages and was scheduled to meet Thysse in a much-anticipated rematch. All that fell by the wayside when Thysse and trainer Damien Durandt tested positive for the virus last week.

The door closing on Thysse, at least for the time being, opened a window of opportunity for Cristiano Ndombassey (12-5, 9 KOS), an Angolan based in Cape Town. Already in training for a cancelled fight in Russia, he jumped at the chance.

Ndombassey had his fighting start in kickboxing and has an explosive seek-and-destroy style. Thrown in at the deep end from the beginning of his career, he has been in with the likes of Emmany Kalombo, who recently put up a very credible performance against Israil Madrimov. He landed some hard rights against Kalombo, stopping him in his tracks before getting stopped himself in the sixth.

Ndombassey has gone 1-1 in 2021, winning and dropping 10-round decisions against Jami Webb and Lukas Ndafoluma, so at least he will not have inactivity to contend with. Although both fighters made their careers in the junior middleweight division, Ndombassey had his last fight at middleweight. Saturday’s bout will also take place at middleweight over 10 rounds.

Could the heavier weight, combined with the last-minute change in opponent spell danger for Knapp?

If Knapp (12-1-1, 9 KOs) wants to keep the Thysse rematch alive in the new year, Ndombassey represents a banana peel that he cannot afford to slip on. Nicknamed the “Warrior of Faith,” the Angolan seemed quietly confident at the weigh-in.

Junior bantamweight Ricardo Malajika was set to try and avenge his only loss to Sabelo Ngebinyana in a rematch but that fight also fell through when the participants popped positive for COVID19. A replacement bout was hastily arranged, only for one of those fighters to test positive as well. 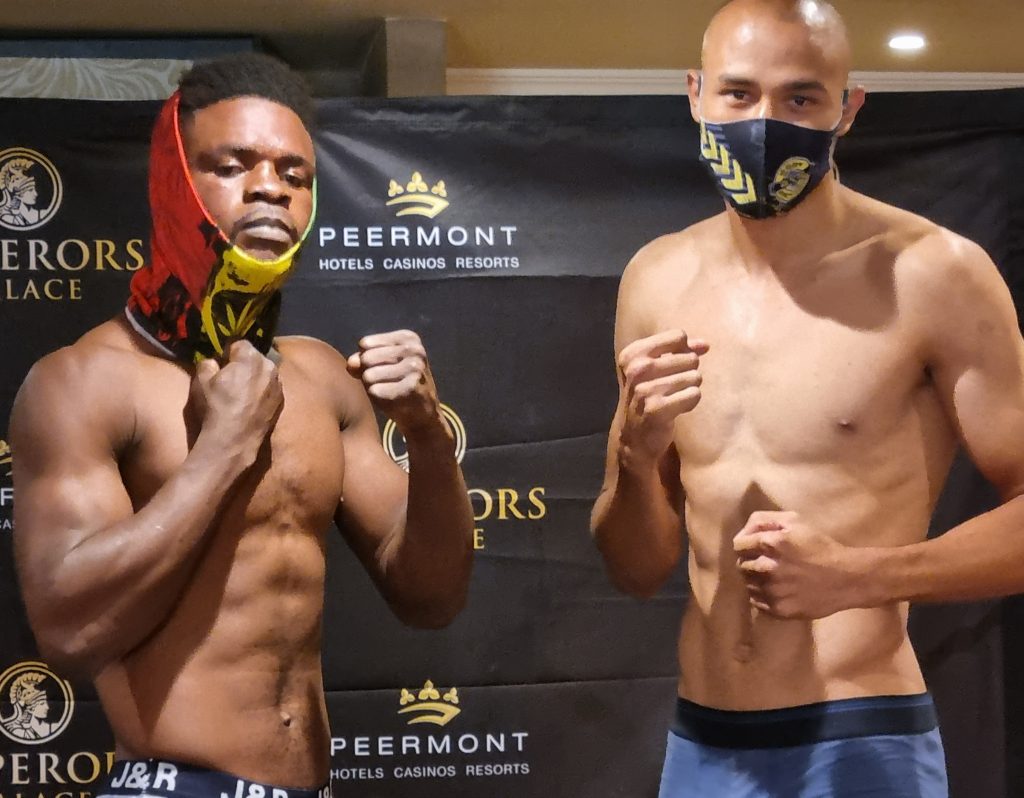 As a result, the 10-round junior middleweight clash between streaking 8-0 prospect Shervontaigh Koopman and Henriques Lando from Angola has been bumped up to the main supporting bout.

Koopman has grown into a calculated boxer-puncher, who has exhibited a well-rounded skill set and the ability to remain calm under pressure. He seems to have more than decent power, six of those eight wins coming via the short route. In his last fight he scored a spectacular seventh-round knockout over Simon Dladla to win the national title. Saturday night he will have the opportunity to add a regional belt to his trophy case.

What he lacks in finesse, the 6-2 Lando makes up for in heart and sheer aggression and he has become a popular fixture on the South African small hall fight scene. Having had no build-up phase in his career, he has only been stopped by Kalombo, all his wins coming by knockout.

Another man who will be risking his “0” is 4-0 heavyweight Juan Roux. He will be up against the much taller Wilhelm Nebe (5-1, 4 KOs) in a six rounder. Nebe, who can punch and take a shot in return but has so far lacked stamina and technical skills, will be looking to rebound from his first loss to Josh Pretorius.

Roux holds the edge in total rounds boxed and the experience may serve him well. He more than makes up for what he lacks in raw power with his busy work rate and combination punching.

Middleweight Phikelelani Khumalo will be looking for his fourth win in as many fights when he takes on Thembani Mhlanga (3-5, 2 KOs) in a six rounder to open the show.