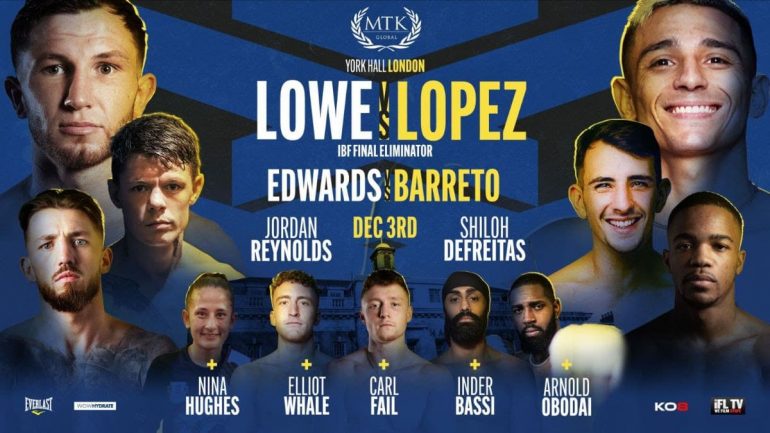 Featherweight Luis Alberto Lopez has enjoyed being an underdog in recent fights. Not only does he relish it but Lopez has pulled off significant upsets.

Lopez is confident he can score another one, this time at the expense of unbeaten Isaac Lowe tonight (today in the United States), at York Hall in London, England. The 12-round IBF title elimination bout will stream live on ESPN+ (2 p.m. ET/ 11 a.m. PT).

The 28-year-old Lopez (23-2, 12 knockouts), who resides in Mexicali, Mexico, has won his last six fights since losing a close unanimous decision to Ruben Villa in May 2019. Lopez has turned his career around from being utilized as a steppingstone to possibly landing a world title fight.

Sean Gibbons is confident Lopez will carry momentum into the Lowe fight and come out with another impressive victory.

“This is his time,” Gibbons, who represents Lopez, told The Ring Tuesday afternoon. “Luis has earned this IBF world title eliminator the old-fashioned way. He upset two great fighters in Andy Vences and unbeaten Gabe Flores. ‘Venado’ Lopez is a throwback fighter. [He] has gloves, will travel and fight you anywhere, anytime.

“I see Luis pounding down Isaac Lowe and winning the fight and on to his world title shot.”

Gibbons is the president of Manny Pacquiao Promotions.

In the co-feature, former WBC flyweight titleholder Charlie Edwards (16-1, 6 KOs) will square off against Spain’s Jacob Barreto (13-3, 5 KOs) in an eight-round bantamweight bout.