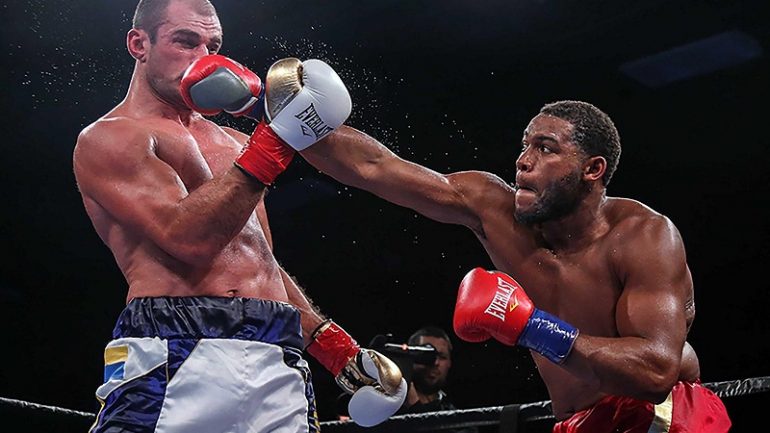 Tonight’s Triller card will have a new main event.

Heavyweight contender Michael Hunter, who is ranked No. 8 by The Ring, will face Jerry Forrest at the Hammerstein Ballroom in New York City. The 10-round bout will headline a ‘Night of Heavyweights’ card that will stream live on TrillerFightClub.com and on FITE.TV (Thursday, Dec. 2, 6:30 p.m. ET/ 3:30 p.m. PT).

The ten-rounder will replace the original main event, in which Andrey Fedesov was scheduled to take on Junior Wright before Fedesov suffered an injury during training.

Hunter (20-1-1, 14 knockouts), who lives and trains in Las Vegas, was able to secure a fight before the conclusion of 2021. In his last bout on August 3, which also took place in New York City, Hunter stopped Mike Wilson in round 4.

Almost a year ago, the 33-year-old returned from a year’s absence from the ring by knocking out Shawn Laughery. Hunter is unbeaten in his last nine bouts, which also includes a draw against Alexander Povetkin in December 2019, since losing to former undisputed cruiserweight champion Oleksandr Usyk in April 2017.

Forrest (26-4-1, 20 KOs), who resides in Newport News, Virginia, has not fought since fighting to a majority-decision draw against unbeaten Zhilei Zhang on February 27. Forrest fought back bravely in the later rounds after being dropped three times during the fight.

The 33-year-old has lost two of his last four bouts. His most recent defeat took place on July 9 of last year, losing to Carlos Takam by unanimous decision. The loss to Takam took place about a year after Forrest lost a controversial split-decision to unbeaten Jermaine Franklin.

In the co-feature, which is a compelling clash between unbeaten heavyweights, Cassius Chaney will square off against George Arias.

Chaney (21-0, 14 KOs), who resides in New London, Connecticut, defeated Shawndell Terell Winters by unanimous decision in his last bout on August 14. A former collegiate basketball player at nearby University of New Haven, Chaney is managed by Zachary Levin.

Arias (16-0, 7 KOs) has not fought since February 17, defeating Joel Caudel over six one-sided rounds. Originally from the Dominican Republic and now residing in The Bronx, New York, the 29-year-old is promoted by Dmitiry Salita.