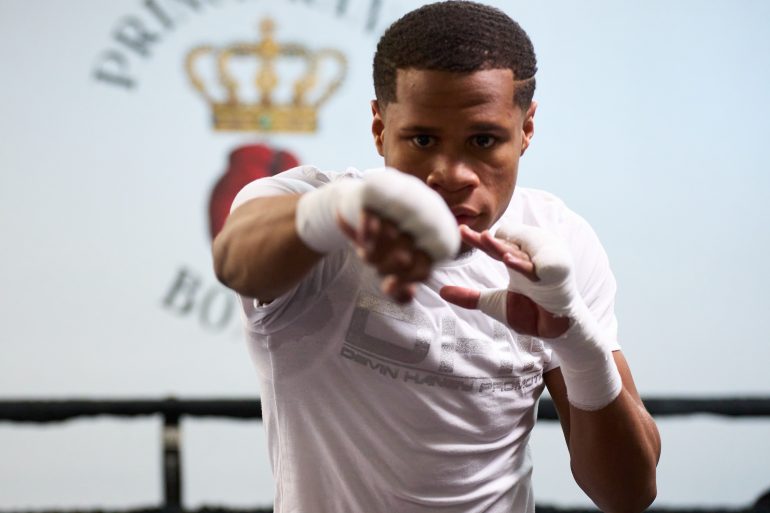 Devin Haney admits he’s getting better. In past years, the 23-year-old undefeated WBC lightweight titlist had a tendency to dwell on his rare mistakes, instead of immediately addressing them.

Not so much anymore.

Haney will be embarking on the most important fight of his career to date, when he defends the WBC title against “interim” WBC lightweight titlist Joseph “Jo Jo” Diaz Jr. this Saturday at the MGM Grand Garden Arena in Las Vegas, Nevada, broadcast across the world on DAZN (5 p.m. PT/8 p.m. ET).

Haney knows he can’t be loose. He realizes the monumental task at hand is getting by Diaz, a rugged veteran who is the former IBF junior lightweight titlist.

Haney just saw a tape of his May victory over Jorge Linares a few weeks. Haney said he was amazed with how easily he was beating Linares. He said he grew too comfortable in that fight, and it’s something he promises he won’t do against Diaz, a live underdog who is making his second fight at lightweight.

“The Dream” says he’s a much better fighter than he was a year ago. Haney says he’s sharpened his defense, and is a more accurate puncher. He also says he’s been reviewing more tape of his flaws.

“I’m the type of person who’s very hard on himself,” Haney said. “I would do 10 things right and get on myself about the one mistake I made. Sometimes I used to dwell on mistakes in the past, but lately this camp, I’ve been better at working on the things I see.

“It’s why I don’t like reviewing tapes of my sparring. I’m way too hard on myself. But I’m getting better. I’ll see my footwork off tape and go immediately at fixing it, or I’ll see something I don’t like and I’ll work on it the next day.”

This interview was conducted before the Kambosos-Lopez fight, though Haney stressed something very prescient.

“I don’t want to leave any doubts that I beat Diaz,” Haney said. “In this fight, I want to leave the world with nothing to say; no doubts. I don’t want anything said. I trust my skills and I have no concerns about Diaz.

“This is what I learned about the Linares fight. I got too lax, I got too comfortable. I was having my way when some trouble came. I won’t make that mistake again.”

The trouble Haney was referring to came courtesy of a Linares’ right hand in the 10th. Haney was wobbled by the shot, and it imbued Linares with a jolt of confidence to go at Haney in the last six minutes of the fight.

“Like I said, I won’t make that mistake again against Diaz,” Haney said. “People watching this will see the best Devin Haney there is.”