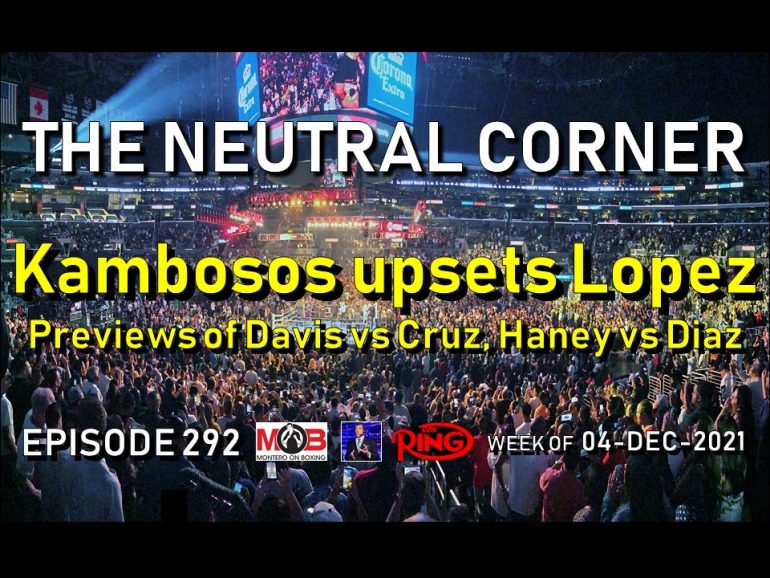 On episode 292 of The Neutral Corner boxing podcast, host Michael Montero gave his thoughts on yet another upcoming PPV card from Premier Boxing Champions (PBC).

It was recently announced that PBC will broadcast a New Year’s Day card from Hollywood, Florida on Fox PPV. Heavyweights Luis Ortiz and Charles Martin headline the show.

In the UK, Amir Khan and Kell Brook announced they will fight on February 19 in Manchester, England. They will headline a Sky Sports Box Office (PPV) broadcast. At long last, the bitter rivals will settle their long-running beef in the ring.

There were two cards of note on Saturday, December 4. Both took place in the United States.

In New York, George Kambosos Jr scored the upset of the year with a split decision win over former undisputed lightweight champion Teofimo Lopez Jr. Oddsmakers saw Lopez as a 13-1 favorite coming in. The bout headlined a Matchroom Boxing card that was broadcast on DAZN.

In Las Vegas, Stephen Fulton eked out a majority decision win against Brandon Figueroa in a junior featherweight title unification. Many fans and media were split on who won. The fight headlined a PBC on Showtime broadcast managed by TGB Promotions.

“I have an issue with the Monday morning quarterbacks,” said Nacho. “Shakur Stevenson, Ryan Garcia and Devin Haney are all the sudden calling out Kambosos. Now they want a piece of the champ, when they wanted no part of Lopez.”

“I think Ring Magazine should petition to bring 15-round fights back,” said Thad. “But only when it’s a unification match between two belt holders. Because if the Fulton vs Figueroa bout was 15-rounds, I feel that Figueroa knocks out Fulton.”

“I’m glad the right fighter won the Lopez vs Kambosos bout,” said Rich. “Kambosos talked the talk, but he walked the walk. I was kind of shocked that he was a 13-1 underdog.”

“I think Ring Magazine did something wrong last year naming Teofimo Lopez Senior as the Trainer of the Year,” said Mark from Ireland. “Joey Gamache (who trained Lopez Junior for his fights with Commey and Lomachenko) should be credited as Trainer of the Year. I think there should be a petition, for the first time ever, to retroactively change the winner.”

“I predicted Lopez would win by ninth-round TKO,” said Justin. “I knew that Kambosos was good, I watched his fight with Lee Selby, and he was awesome against Teo. It really shocked me when he dropped him in the first round.”

“I felt like Kambosos could have got Lopez out of there,” said Kevin. “He should have pushed the pace more. In the last two rounds Lopez had nothing left, he was a sitting duck.”

“I have to be honest, I didn’t think much of Kambosos,” said Zack. “I thought Lopez had the power and was going to knock him out in the first five or six rounds. But Kambosos surprised Lopez with that jab of his. He followed the jab with the left hook and landed it all night.”