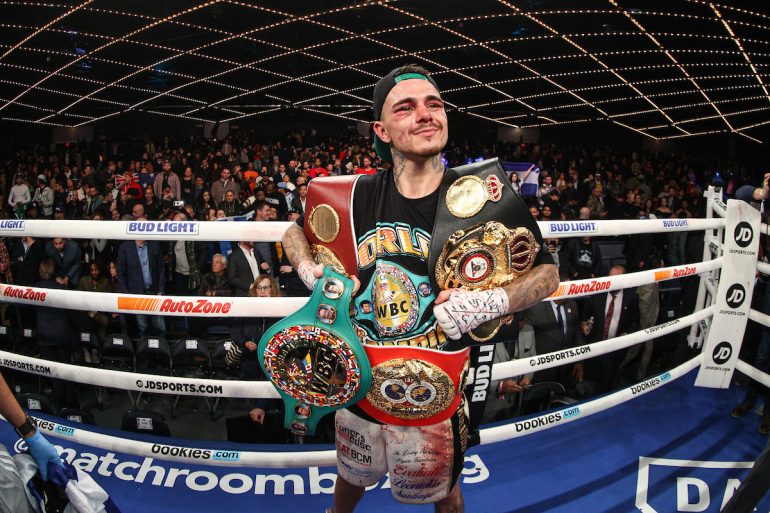 NEW YORK – In the end, their crimson masks told the story. They were both bleeding from their swollen left eyes and both throwing every ounce of energy that they had in their weary arms.

But in the end, it was George Kambosos who had his hand raised in a surprising 12-round split-decision upset over Teofimo Lopez Jr. Saturday night at the Hulu Theater at Madison Square Garden.

“Have I changed all week? Have I changed throughout my whole career? Never,” Kambosos said. “I believed in myself, I backed myself and I said it – time and time again. You might not believe it, but I believe in myself. Look at me know, I’ve got all of the jewels, I’m not the king. You’ve got the four kings, I’m the emperor because I come to every other country and I take them out, one by one. All respect to Teo, thank you Madison Square Garden I love you all.

“I had that in my head, my mentality, I said I’m going to hit this guy clean, hard and put him down and the fight changed after that.”

Lopez came right out with the wrong strategy. He thought he would quickly end it with one punch, immediately attacking Kambosos with wide, winging rights. Kambosos was backing up, but Lopez did not help himself by missing the sweeping rights and lefts.

The surprise came when Kambosos caught Lopez with a counter right on the cheek that knocked him down. Lopez was not hurt or in trouble, but the first-round knockdown instilled a wealth of confidence in Kambosos.

In the second, Lopez, far calmer, jabbed at the body, though was getting caught by Kambosos’ counters as he neared. Lopez, however, was the heavier puncher—a fact Kambosos acknowledged by backing up.

Kambosos tried using his jab in the third, while Lopez seemed inches short of landing the big shot. That continued to be Lopez’s mindset—loading up to land the homerun. Kambosos, meanwhile, pecked away with his left.

In the last minute of the third, Lopez found his range and began landing, hitting Kambosos with a few rights to the head. 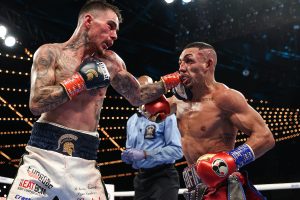 George Kambosos often got the better of the exchanges early on. (Photo by Ed Mulholland/Matchroom).

Lopez switched to southpaw momentarily in the fourth. He switched back to orthodox a minute later. Kambosos landed a right-left to the body, and though he couldn’t hurt Lopez, he was cutting him up and scoring.

In the fifth, Kambosos used his jab to keep Lopez away. Lopez landed a big right, but Kambosos handled it well. Lopez nailed Kambosos with a right as he neared, and both fighters felt confident after five—but it seemed Kambosos was getting the better out of the exchanges.

Kambosos used his jab again at the outset of the sixth. He was effective with his left, while Lopez kept missing. In the seventh, with both fighters slowed, Kambosos still found a way to connect with the left. In the latter portion of the seventh, Kambosos connected with a right uppercut. By then, Lopez’s left eye was swelling.

Kambosos began using his left jab like a piston in the eighth. He was able to take a few Lopez shots, absorbing a left hook midway through the round. As the seconds began ticking away in the eighth, Lopez seemed to finally land the big shots he had tried earlier.

Kambosos took the shots well, though was slightly wobbled.

Lopez dug a left into Kambosos in the opening minute of the ninth, and he landed a left uppercut in the latter portion and a series of overhand rights that had Kambosos backing up. It seemed to sway the fight in favor of Lopez.

By the end of the round, Kambosos appeared to be losing some of the verve that sustained him early.

A Lopez overhand right proved it. It knocked Kambosos down and had him in serious trouble. Lopez tried finishing him, but Kambosos somehow stayed on his feet and fought back.

The Australian returned to his corner with a gaping cut on the corner of his left eye, causing blood to stream down his face.

In the 11th, Lopez caused Kambosos’ head to fly back with a left to the chin. This time, it was Lopez bleeding from the left eye and on his right cheek. With :36, referee Harvey Dock stopped the action momentarily, so the ringside doctor to look at Lopez’s face.

In the last round, Lopez snuck a left to the belt, as Kambosos kept using the left. With both the face of both fighters spouting crimson, they mauled each other to the final bell.

“This is for my kids and my grandfather, George Kambosos Snr, who sadly passed away two months ago,” Kambosos said. “My family, my grandfather, I know he’s in the ring here with me right now. My whole family that’s here, my father, my wife.”

“Look at me, I’m the greatest fighter in Australian history, I’ve got all of the belts.”