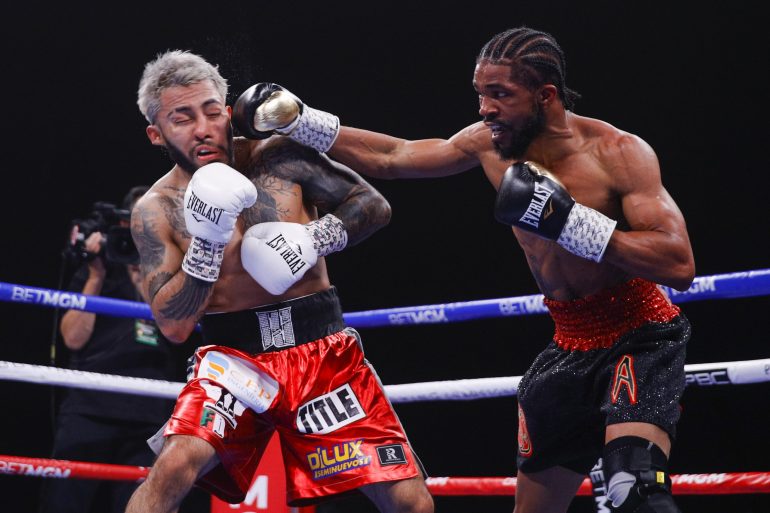 Gary Antonio Russell's sharp shooting to the head allowed him to edge Alexandro Santiago, who attacked the body, over 10 hard rounds. Photo by Esther Lin/SHOWTIME
27
Nov
by Doug Fischer

Gary Antonio Russell survived a stern test from Alexandro Santiago en route to winning a close majority decision after a hard-fought 10-round bantamweight bout on the Stephen Fulton-Brandon Figueroa undercard on Saturday at the Park Theater in Las Vegas.

Russell (19-0, 12 KOs), who won by scores of 95-95 and 96-94 (twice), boxed well in the early rounds and landed some eye-catching shots in Rounds 8, 9 and 10, but Santiago (24-3-5, 13 KOs) was the aggressor throughout the Showtime opener, controlling most of the action of the middle rounds by bulling the 28-year-old Maryland native to the ropes with a two-fisted body attack.

Russell, the younger brother of WBC featherweight champion and The Ring’s No. 9-rated bantamweight, appeared to get the worst of the grappling and inside fighting, often slipping or being tossed to the canvas during the first half of the fight. He was able to catch Santiago coming in and counter punch well off the ropes during the first four rounds of the bout, but from Round 5 through 7, the 25-year-old Tijuana native overcame height and speed advantages by hooking over Russell’s southpaw jab, mugging him in close and then punishing the taller boxer’s narrow midsection along the ropes.

After the bout Russell, who was coming off a one-round No Decision due to an accidental headbutt vs. former beltholder Emmanuel Rodriguez in August, said he was leery of his head clashing with Santiago’s whenever the squat veteran muscled his way inside. However, he thought he did enough to earn the decision.

“I thought I won the fight and I thought I clearly out boxed him,” Russell said during his post-fight interview. “He was tough and tried to be rugged and aggressive. I had the headbutts from my last fight in the back of my mind, so I tried to keep it clean and get my rounds in.”

The narrow points loss snapped an eight-bout win streak that Santiago had strung together since holding Jerwin Ancajas to a split draw in an IBF 115-pound title bout in 2018.