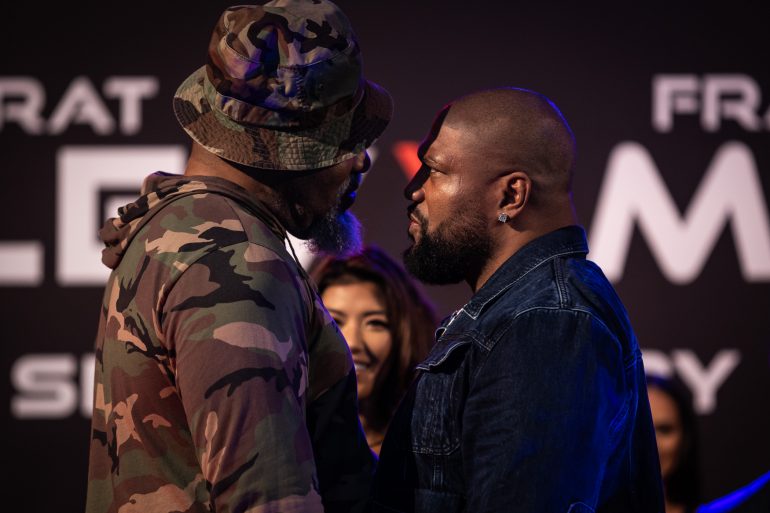 Former lineal heavyweight champ Shannon Briggs and MMA legend Quentin “Rampage” Jackson took the stage at what social media hailed as “The Best Press Conference Ever” just days prior to the debut of Triad Combat set for this Saturday, November 27, at Globe Life Field in Arlington, Texas. All of the fighters met the media at a packed final press conference with an over-heated atmosphere headed by their Team Captains, Briggs for boxing and ‘Rampage’ for MMA.

Hosted by Hall of Fame Ring Announcer Michael Buffer and the Voice of Triller Fight Club, Ray Flores, the Captains wasted no time in leading the way for a truly explosive and memorable press conference in Dallas.

Below are quotes from the participants: 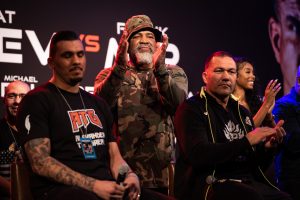 Shannon Briggs: ‘Rampage Jackson is scared to fight me and he’s leading a scared group of fighters on Saturday night. He talks tough like most of the MMA guys. Look at my Team, they’re all top-notch boxers. Mike Seals is a true animal and he’s going to destroy Mike Perry on Saturday night. Perry, you just talked yourself into a hospital visit, these are the best strikers in the world. Frank Mir, I respect you but Kubrat Pulev is going to knock you out very badly on Saturday night.”

“Rampage is leading them all into the fire on Saturday night. Order this on PPV if you’re not in Dallas and then the next one is Rampage and me.”

Rampage Jackson: “I don’t know any of these boxers, but I know all these MMA guys and they’re all stone-cold killers. The MMA fighters are the toughest fighters on the planet. Keep on underestimating us and we’ll beat you on Saturday night.”

“Shannon is good at getting underneath my skin but these warriors on my side will shut up him up for good on Saturday night.”

“Of course, I’ll fight this clown, anytime we can put it together with Triller for Triad Combat.

Kubrat Pulev: “Boxers are much more precise in our striking, we should win every fight on Saturday night. These MMA fighters don’t stand a chance.”

Frank Mir: “I’m always the predator going after the biggest hunt and Saturday night against Kubrat Pulev will be no different. We taped out the triangle, it’s 26 feet long. I’ll know exactly how to be victorious on Saturday night.”

Alexander Flores: “I’ve been training for a fight for 16 weeks, sparred over 100 rounds, once I got the offer I said let’s do it. Mitrione is standing in my path and I will destroy him on Saturday night.”

‘Platinum’ Mike Perry: “I’m going to f*** this dude up on Saturday night and somebody might die. I’m just focused on what I always do, hurt people and entertain the fans. That’s what people want from me and that’s what they get, satisfaction guaranteed from Mike Perry.”

Mike Seals: “Clearly this dude has no clue what he’s gotten himself into. I’m going to destroy Mike Perry on Saturday night.”

Presented by Triller Fight Club, advance tickets for Triad Combat and Metallica priced at $300, $200, $125, $85 and $50 can be purchased at TrillerFightClub.com and Ticketmaster. Globe Life Field is located at 734 Stadium Drive, Arlington, TX 76011. In addition to the exciting seven bout card for the new sports’ debut, International Music Icons Metallica will also play a full concert.

The Triad Combat PPV event will be carried in North America across all PPV platforms, including cable, satellite, telco, and streaming. Complete PPV distribution details can be found below.

TRIAD COMBAT is a revolutionary, new combat team sport which incorporates boxing and MMA rules in an aggressive, fast-paced manner with the fighters competing in a specially designed triangular ring over two-minute rounds featuring professional boxers competing against professional mixed martial arts fighters. The specific motto of leveling the playing field between the two sports utilizing crossover gloves and with holding allowed is meant to offer boxing and MMA fighters an even battleground where neither opponent has a greater advantage.