Teofimo Lopez Jr. calls the George Kambosos fight one of the most personal of his career 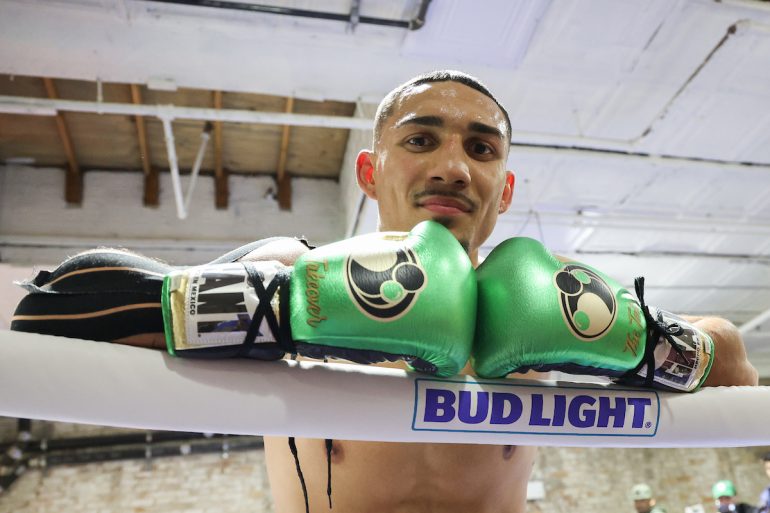 November 23, 2021; New York, New York, Teofimo Lopez works out for media at the Church Street Gym during the open training sessions for the November 27, 2021 at Madison Square Garden. (Photo by Ed Mulholland/Matchroom).
25
Nov
by Joseph Santoliquito

Anyone who knows Teofimo Lopez Jr. knows that he’s an approachable, funny guy away from the ring. They know he loves to laugh, and joke. They know he respects boxing.

But there has been something brewing within the WBA, IBF, and WBO and Ring Magazine lightweight world champion over the last few months towards his title defense against IBF mandatory challenger George Kambosos.

And “The Takeover” will be wearing a new persona—“ITL”—meaning “Insane Teofimo Lopez.”

His anger stems from an incident in Miami, where the original fight was scheduled to take place, on June 5, at LoanDepot Park in Miami.

“This whole situation has everything to do with George,” Lopez said. “I don’t f—g like him. I’m not going to use the word ‘hate,’ because hate is a very strong word that I don’t like to use. I do not like him. I do not respect him. I give everyone a chance. Do not disrespect my family. Do not talk about my family. I guess guys get comfortable when I’m not around.

“Apparently, he screamed at my mother, my father, my whole team in Miami. He saw them in the hotel lobby at the bar, and said something about they had the COVID disease. I thought everyone from Triller was being disrespectful to my family; not everyone but a good majority of them. This fight is very, very much personal to me. It’s one of the biggest personal fights of my career. I always give love to my sport. I always give love and respect to everyone in my sport.

“What I get back is a backhand to my team, to me, and to my mother and my father. Okay, okay, say what you want about me. You don’t ever disrespect my family. Now, there is not love in this anymore. I dislike everyone in this—and everyone will feel my wrath. Every one of them, each way it goes.

Lopez said his mother and father was in Miami when this incident occurred. Lopez felt he was there in Miami no one would have anything like that to his team. He says he had a lot of street fights in his life—and it wasn’t too good for the ones on the other side.

“I’m the same beast, but a different animal when I lace up those gloves,” Lopez said. “This guy has nothing for me. I was 14 the last time I was in a street fight in South Florida. It didn’t go well for the other kid. I’ll stop there. I’m very low keyed when it comes to that stuff.

“Kambosos will pay a price. I can’t wait to get my hands on him. I like to say you treat the CEO as well as you treat the janitor. A person is a person and we all bleed the same. This guy thinks he’s above everyone else. I carry myself the same as everyone else.”