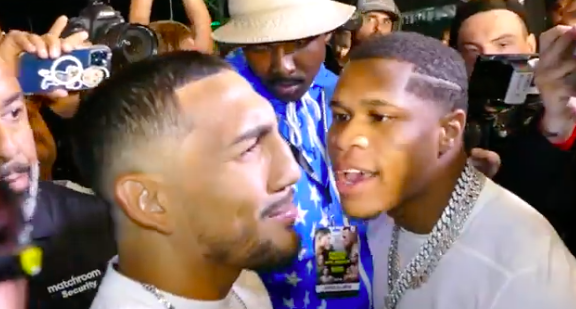 They jawed, and soon maybe Lopez and Haney will sort this out for real?
24
Nov
by Michael Woods

Teofimo Lopez had an interesting 2021, but not a particularly active one. He’s not alone, of course, the continuing Covid clustereffery meant that most top tier pugilists weren’t as busy as they would have liked. “The Takeover” architect gloves up Saturday night in NYC for the first time since Oct. 17, 2020, against George Kambosos, who isn’t seen as a threat to upset in most all circles outside his own squad.

On Tuesday night, I asked Teofimo’s dad, “Junior” Lopez, what he’d like to see as next for his 16-0 son, if things go according to his vision.

“Josh Taylor right away, don’t need to wait,” he told me, referring to the talented Scot who is edging his way up the pound for pound ladder. “No man on this planet can beat my son!” 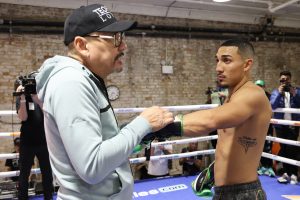 It seems to me he’s a throwback in that he craves stern tests, and he’s vocal about wanting to fight the Terence Crawfords and Teofimos and such, and he doesn’t equivocate in the way that so many businessmen boxers do. Lopez the elder wasn’t in a mood to share in that spirit of bonhomie.

Junior said Saturday will be last call for his son at 135, that weight isn’t optimal for the 24 year old who debuted as a pro in 2016, at lightweight. This, despite the fact that yeah, there’s “unfinished business” at ’35.

“Everybody’s scared, I got a monster-like son. Richard Commey, never been dropped, can hit with both hands, we made him look like nothing. You think those guys don’t notice?”

Papa Lopez said promoter Bob Arum seemed down with the plan, for spring of 2022, but that the Bobfather has also publicly spoken of his desire to see Taylor take on Terence Crawford, who is just off a career-best win, against Shawn Porter. “My son has been at this weight for eight years, it’s time to move up, there’s nothing left to prove. Watch, this will be the last one at 135, then Devin Haney will do a callout,” the combustible patriarch predicted.

That was yesterday, today the game changed, it seems like.

Umar from IFL Tweeted out late Wednesday afternoon that Eddie Hearn said that if Devin Haney beats Jo Jo Diaz Dec. 4 and Teofimo handles George Kambosos at MSG Theater, then Haney vs Teofimo will get made. Nope, no specifics on when and where have been put out there. He put out a video hit, in which Hearn said, “We’ve all shook hands that Teofimo will fight Devin Haney if they both win, and I don’t believe his dad would go back on his word.” Flirtation between Teofimo and Devin Haney has occurred for a long spell,  and we’d heard before of a handshake deal, but this was Hearn saying it, and articulating that the principals who will do the fighting want to get this face-off done. 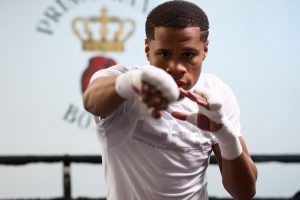 Devin’s dad Bill Haney has also given his word, the Brit deal-maker stated, and he thinks all involved will adhere to the verbal agreement. “If they (don’t honor the agreement), in the words of Teofimo Senior, you’re a pussy…and I don’t believe anyone there is a pussy, I certainly won’t tell ’em to their face, or honor your word, let’s make the fight!”

The matter of a Teofimo vs Haney clash came up in October, when the Lopez boys and the Haney duo had a chat, in front of cameras. Teofimo said that Haney and his dad talk a better game than they actually play, and pushed for a showdown. Bill Haney sounds down with it, and asks if it can screen on DAZN. Teofimo says sure, ESPN, DAZN, anywhere is fine with him. “You don’t wanna do it,” says Teofimo, getting a bit more animated. “You’ve been fed with a silver spoon your whole life,” he said to Devin, in Fresno, at the Mikey Garcia vs Sandor Garcia event. Teofimo the elder got more heated, and then the teams were seperated. Eddie Hearn ambled over, to see if he could funnel some of that passion and get a meaningful clash set for 2022.

I messaged Bob Arum, asking what he thinks of this news drop, being that Lopez is contracted to his company, and will insert a response if furnished. I’m thinking maybe Bob might not be keen to see Hearn acting as promoter for yet another Teofimo fight, though.

Jo Jo Diaz will be keen to mess up the set in pencil plans, that could be another sticking point, he gets a crack at Haney and his WBC title Dec. 4.

I asked Junior if he thinks Diaz has a decent shot to upset Haney. “Anything can happen, I give Diaz a chance, maybe it’s a 50-50 fight, but I think it’s a mismatch, Jo Jo is too small,” Teo’s father shared. “Haney tries to be a bully.”