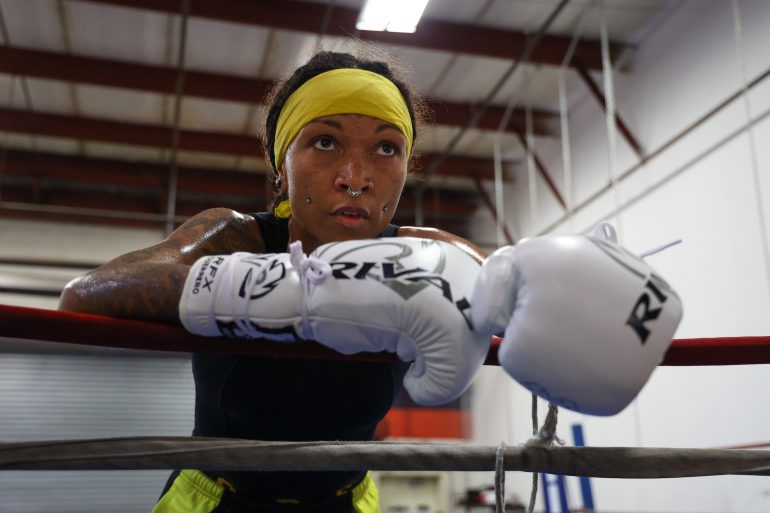 Kali Reis trains at Fight Firm in Philadelphia for her bout against Jessica Camara. (Photo by Ed Mulholland/Matchroom)
24
Nov
by Diego Morilla

Another great weekend of women’s boxing gave The Ring’s Women’s Ratings Panel more than enough reasons to engage in another great debate. And with some of those results being debatable enough already, the stage was set for a few controversial movements.

In the end, the agreement was almost unanimous in the two most important decisions of the week, as we will see below.

In one of those fights, a legend fighting in a legendary venue gave us a painful piece of information: she has left behind her best years, for good. Multiple titlist and Argentine boxing legend Marcela Acuña fought 10 rounds against former junior bantamweight beltholder Debora Dionicius and left a poor image of herself, failing to engage and react to Dionicious’ stick-and-move tactics and simply not generating enough output to be even considered as a threat to anyone in the competitive featherweight division.

“Dionicius had everything against her, including the venue, the organization, everything,” said Argentina’s Yesica Palmetta, as a first-hand witness sitting at ringside for that fight at the fabled Luna Park Stadium in Buenos Aires. “Deborah used her legs, kept the right distance and calculated the precise attack time with combinations in speed that made her a clear winner. Acuña could not get it right.”

Elsewhere in the world, however, a couple of fighters did get it right, but they had to give their very best to achieve that.

In Douai, France, local credit Segolene Lefevre had to go the extra mile to get a decision win over Mexico’s Paulette Valenzuela in a junior featherweight vacant title bout.

“Lefevre was dropped late in the fight against Valenzuela,” said Mark Jones, referring to a flash knockdown in the last 30 seconds of the bout that nevertheless reflected Valenzuela’s relentless but ineffective pressure during the fight. “She banked almost every round early and mid-fight to win,” he concluded, while Lupi Gutierrez-Beagle of Beautiful Brawlers said that it was “a solid win for Lefebvre. One step closer to the Ring belt would give her the incentive to turn up that heat a little more,” she said, referring to the fact that an eventual bump to No. 3 would eventually make her eligible, under certain circumstances, to fight for the still vacant inaugural Ring belt in the 122-pound division.

“The French boxer did a great job and this last fight against Valenzuela, showed physical strength and intelligence by being able to endure a fight with a bulldozer who did not stop pressuring her until the end,” said Palmetta in justifying her vote, while boxing historian Malissa Smith said that “’Majestic’ Lefevre fought a skilled fight with a lot of good movement, shot selection, and defense on the back foot.  Valenzuela was a real come forward swarmer, but open to Lefevre’s right hand.”

Lefevre finally gathered enough votes, and was subsequently promoted to No. 3 in The Ring’s ratings.

Another fight worthy of consideration for changes in our ratings took place in New Hampshire, where No. 3 junior welterweight Kali Reis took another step towards a mega-bout with Ring champion Chantelle Cameron with a close victory over Canada’s Jessica Camara, currently rated No. 5 by The Ring.

The fight was close enough for Camara to hold on to her No. 5 and to even have a few voices supporting a bump to No. 4 after putting the current WBA titlist in trouble. And given the kind of challenge she had to overcome just to get the win, Reis was promoted to No. 2 in the division, almost unanimously.

“For me Reis vs Camara is Fight of the Year, period,” said Gutierrez-Beagle. “They left it all in the ring – and then some. Kali could barely move her legs in the 10th but managed to win that round. Jessica Camara is a definite future world champion.” 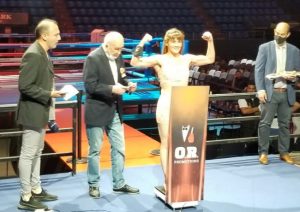 “First off, this fight really showed how solid women are in the ring,” agreed Smith, but not without a few caveats. “Reis and Camara both showed up to fight, and Camara in particular, had her best outing by far with her shot selection, tenacity, and confidence through most of the fight.  Reis (…) has to take it back to the drawing board in her terms of how she will overcome her faults to execute a game plan in her fight with Cameron.”

Palmetta went even further by stating that “Reis didn’t win that fight. The Canadian was much more effective in her offensive work and speed while Reis felt slow and heavy trying to bet on a power shot that almost works for her.” Her compatriot Irene Deserti also stated that “I saw Camara win.  In any case, the fight was very competitive and it is another demonstration that women’s boxing has many talents to discover,” while Jones summarized the entire panel’s feelings with a detailed account.

“I had Camara winning 96-94,” said the editor of Boxing Jones. “I thought she displayed enough classic boxing skill to take most of the early rounds. The decision for Reis isn’t a robbery by any means as she was better in the later rounds, especially in the tenth.”

On that note, the panel’s vote was final, and Reis became the new No. 2 while Camara stayed in her place at the bottom of one of women’s boxing’s most competitive Ring divisional Top 5s.