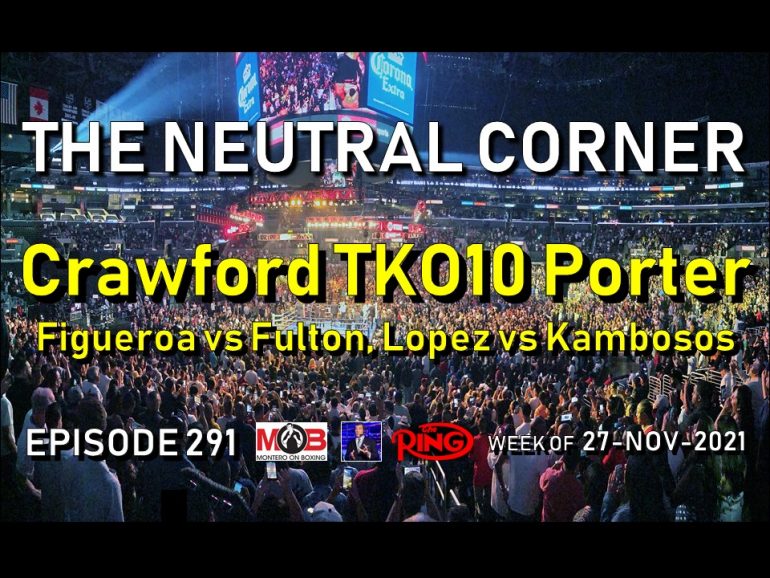 On episode 291 of The Neutral Corner boxing podcast, host Michael Montero gave his thoughts on Top Rank signing the entire US Men’s boxing team from the Tokyo Olympic Games.

Top Rank recently announced they had signed Keyshawn Davis and Richard Torrez Jr, both of whom won silver medals in Tokyo. Davis will train with Brian “Bomac” McIntyre in Omaha, Nebraska.

“With Errol Spence, we’re looking at a fighter who didn’t exactly live the Spartan lifestyle before the car accident,” said CJ Duncan. “And now he’s doing better. But with the detached retina, I can’t see how Errol is going to be the same fighter. Bud Crawford is the best operator at 147 pounds right now.”

“There are people out there who are not giving Crawford any credit for the win over Porter,” said Nacho. “They come up with every excuse in the book, and it’s getting annoying and old at this point. They hype these dudes up before the fight, then throw them under the bus after.”

“I think Charlo will stop Castaño late in their rematch,” said Nigel. “Castaño, as effective as he is, he only has one style. Now Charlo has seen it and knows how to deal with it.”

“I like a potential Crawford vs Josh Taylor fight more than a Crawford vs Spence fight,” said Virtuoso. “Spence has not shown any interest in a Crawford fight. To me, there’s just too much bickering between those two.”