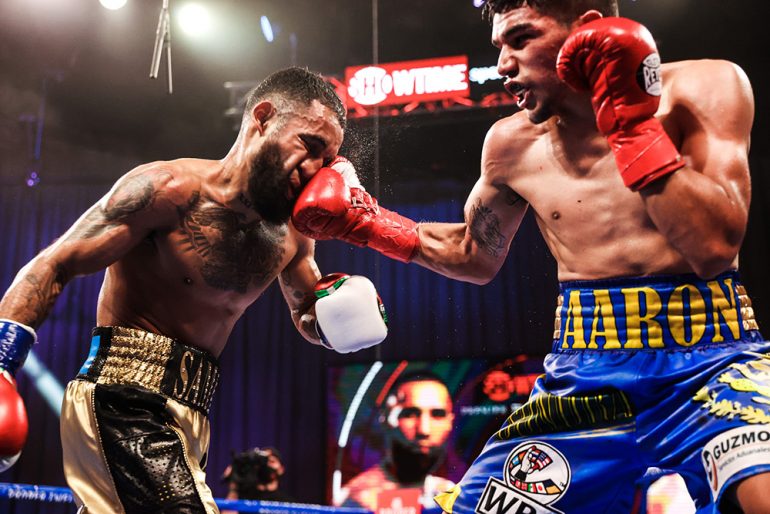 Super bantamweight contender Aaron Alameda will square off against Mexico’s Angel Contreras in an eight-round battle, plus Mayweather Promotions stablemates duel as unbeaten Rock Myrthil faces Kevin Johnson in a 10-round super lightweight tilt, on the non-televised undercard this Saturday, November 27 in a Premier Boxing Champions event from Dolby Live at Park MGM in Las Vegas.

The 28-year-old Alameda (25-2, 13 KOs) will look to return to form on November 27 after back-to-back defeats. Alameda was able to end Luis Nery’s knockout streak in September 2020, losing by decision in a vacant world title fight, and most recently dropped a narrow decision to former champion Angelo Leo in June. Prior to the Nery fight, the Sonora, Mexico native had back-to-back knockouts over Jordan Escobar and Breilor Teran. A pro since 2014, his previous action in the U.S. prior to his two most recent fights saw him earn a sixth-round knockout over Andre Wilson in 2016. He will be opposed by the 27-year-old Contreras (11-4-2, 6 KOs), who most recently scored an upset victory in August over previously unbeaten John Dato. The Monterrey, Nuevo Leon, Mexico native has fought three times in 2021, battling the undefeated Jalan Walker to a split-draw in April and losing a decision to Ramon Cardenas in February.

Fighting out of Los Angeles, California, the 29-year-old Myrthil (17-0, 13 KOs) discovered boxing at age 18, after his family relocated from Haiti to the United States. Following a stellar amateur career, Myrthil made his pro debut in January 2017 with a second-round TKO over Allan Varela in Tijuana, Mexico. In September 2019, he won an eight-round unanimous decision over Jonathan Steele in Las Vegas. The performance caught the eye of Floyd Mayweather, who sat ringside for that bout and ultimately signed Myrthil to his Mayweather Promotions outfit. Most recently, Myrthil outpointed Johnny Rodriguez over eight rounds in February 2020. He will be facing the Detroit-native Johnson (9-2, 5 KOs), who now lives and trains in Las Vegas. The 29-year-old returns to action after defeating the previously unbeaten Luis Salazar by knockout in May. Johnson has fought professionally since 2016 and his two career defeats have come to then-unbeaten fighters Richardson Hitchins and Fazliddin Gaibnazarov.