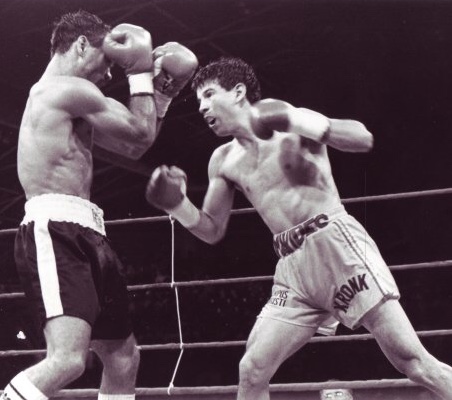 Talented boxer-puncher Jesse Benavides was an amateur standout before switching to the professional game and winning the WBO junior featherweight title in the early 1990s.

Benavides was born in Corpus Christi, Texas, the sixth of nine children, on November 8, 1963.

“We grew up in the projects,” Benavides told The Ring. “It was tough, we were a lower middle-class family. My dad was the only one working, he worked at a service station, he was like a mechanic and gas attendant and my mother worked at the Corpus Christi State University, she was one of the custodians. We didn’t go hungry but we didn’t have expendable money.”

In his early years, Benavides liked football but was too small to play. When he was 10-years-old he tagged along with his brother to Bobby’s Boxing Club, a no-frills gym at the back of a barber shop in a local shopping mall.

“After that first day of training, I really liked it,” he said. “I came back and found out they were having a boxing show that weekend and I asked Bobby if I can fight and he said, ‘You’re crazy, you can’t just fight.’ I said, ‘OK.’ I kept training, I was there all week, every day I bugged him and he finally relented.

“I had my first fight; it wasn’t even a whole week of training. I didn’t win but Bobby was impressed with my motivation to fight. I went all out; I just didn’t have much technique. As it turned out I loved it and kept coming back. I got my rematch after I got some experience and I did win.” 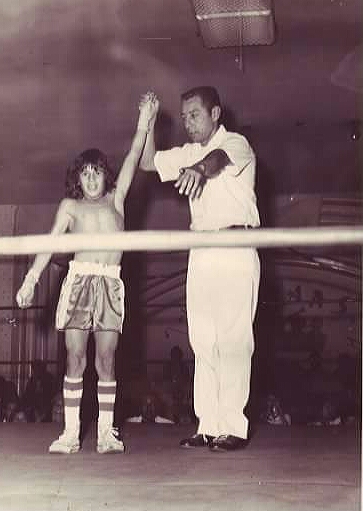 Benavides always lost in the finals of the junior tournaments. However, when he stepped up to senior level he began to thrive and excel, notably winning the AAU light flyweight title in 1981, National Golden Gloves at flyweight in 1982 and bantamweight in 1983. Benavides met rival Robert Shannon in the final of the 1984 Olympic trials.

“We had fought a few times; I had beaten him once and he beat me twice,” said Benavides. “I missed out on going to the Olympics, [it was] a big disappointment but I can’t complain I won so many amateur titles.”

With nothing left to achieve, the Texan, who went 320-20 as an amateur, decided to switch his attention to the professional ranks under the Kronk banner, in September 1984.

“[Richardson] made it hard to land clean solid punches,” he said. “The fight was close in the early rounds. The last half of the fight I put a lot of pressure on him and stayed busy working the body and working my way to head shots. I won a split decision.”

After one defense, Benavides lost his unbeaten record to unknown Argentinean Pedro Decima on the undercard of Michael Nunn-Frank Tate in July 1988.

“I felt Decima’s power in the first round and decided to just box the first couple of rounds,” he explained. “My corner was not happy and expressed I had lost the rounds and needed to be more aggressive. Against all my instincts, I became more aggressive and Decima landed an uppercut I never saw. I got up but was not OK. I pretty much went down on my own, the second time, to get more time to recover. I got up and Decima landed a few punches and the referee stopped the fight.

“My team and I learned some valuable lessons from that loss. I believe I became a better fighter due to that loss. The loss set me back a couple of years though. I had to rebuild and prove myself again.”

Benavides rebounded to win six fights and lined up a fight with WBA titlist Jesus Salud in March 1990.

“The WBA wanted Salud to defend title against Luis Mendoza in Colombia,” he recalled.” Salud refused to go to Colombia because there was a travel advisory from the Federal Government on travel to Colombia due to the drug wars. The WBA waited. and then two or three days before our fight released to press that they would not sanction our fight.”

The skillful southpaw put that disappointment aside and edged past Salud (MD 10). Then Steward made overtures to IBF titleholder Jose Sanabria and WBC kingpin Daniel Zaragoza but both titlists balked at the offer.

“I was hyped up to finally fight for a world championship,” he said. “It was long overdue. I prepared myself physically and mentally to win. Being in my hometown was a great feeling. It also put a lot of pressure on me to win. I wanted to put on an exciting fight for my hometown fans.

“I found myself taking more risk in this fight. I took the fight to him instead of boxing and outpointing him from a distance. I didn’t want to leave any doubt on who won the fight. I had finally accomplished my goal of winning the world championship.”

He made one successful defense before taking his title on the road to face Duke McKenzie, who was bidding to become a three-weight world champion, in London, England, in October 1992. 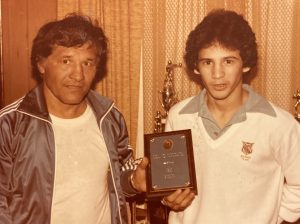 “Duke used his jab effectively to keep me from getting inside and scoring power shots as much as I wanted to,” said Benavides, who dropped the title by 12-round unanimous decision. “I had to work hard to get inside and work the body and then work my way to head shots. I felt I had done enough work to keep my title. But the fact that the fight took place in London definitely played a role in the decision of the judges and the judgement of the referee.”

Benavides dropped spirited unanimous 12-round decisions in subsequent title challenges to WBC 122-pound kingpin Tracy Patterson in March 1993 and up at featherweight to WBC beltholder Kevin Kelley in May 1994.

After three more wins he met rising Mexican Marco Antonio Barrera for the WBO 122-pound title in May 1996.

“Making the weight was the biggest hurdle for me to win the fight,” said Benavides, who had to drop 30-pounds in a seven-week training camp. “I thought weighing in the day before would help me to recover my strength. But no, my body was still weak.

Benavides retired with a record of (40-5-1, 25 knockouts). He has worked several jobs since retiring from boxing, including as a billing clerk. He also went back to college and gained a certificate in Chemical process technician, and later transferred to become a E-Crane operator, loading ships. He is now a certified HVAC technician.

Benavides, now 58, still lives in Corpus Christi. He is married to Yvette, and the couple have two children. He also has two children from a previous relationship.

Kevin Kelley: Duke McKenzie had a very good jab. He used it for the most part to try and keep me from just rushing in and dominating him on the inside. His jab was for keeping me at bay or off balance. Kevin Kelley used his jab to score and he did land his jab effectively in our fight. I have to give Kevin Kelley the edge on the best jab.

Duke McKenzie: Greg Richardson and Duke McKenzie had a good defense. I couldn’t hit McKenzie with solid punches. I would say Duke.

Greg Richardson: He used both handspeed and footwork to keep you off balance. I had to be very aggressive to cut the ring off and get inside to start working the body and working my way to head shots. I just outworked him and was more determined to win the fight. 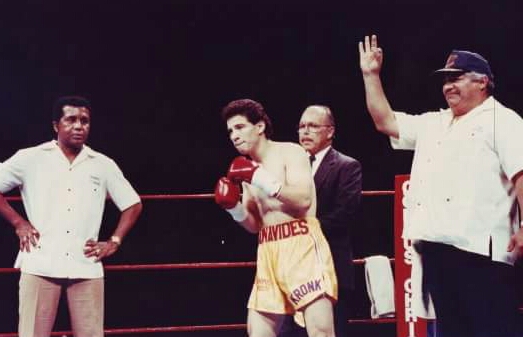 Richardson: Greg was a very good boxer, that had good footwork to keep you off balance. He made it difficult to land solid punches. I had to work hard to get on the inside and work his body and head.

Marco Antonio Barrera: A very smart fighter that had many skills and could adjust his strategy at any time during a fight.

Jesus Salud: I would say both Tracy Patterson and Jesus Salud were the strongest fighters physically that I fought in my career. They both used their strength to try to wear you down so they could take advantage of their strength late in the fight. The difference was I was at the peak of my career when I fought Salud. So, I have to go with Salud.

Orlando Fernandez: I was still at the peak of my career and I landed my best punches against him and he just kept coming forward. I’m sure Barrera had a good chin but I never hit him enough to find out.

Pedro Decima: He was a big puncher, when I blocked his shots I could feel his power through my gloves, he was hurting my fists. He caught me with a good uppercut, and even though I got up I was pretty shaken up and eventually the referee stopped the fight. I had a pretty good chin where I never got knocked out cold but he was definitely the hardest puncher I fought. Barrera had good power, he never hurt me to the head.

Barrera: He was very skilled. He had good footwork, a good jab, a strong straight right hand, and powerful bodyshots. Once he knew he had you hurt he went to finish you off.

Barrera: To me, he was the best overall fighter I fought. I give him all the credit. He went on to prove he was a great fighter.