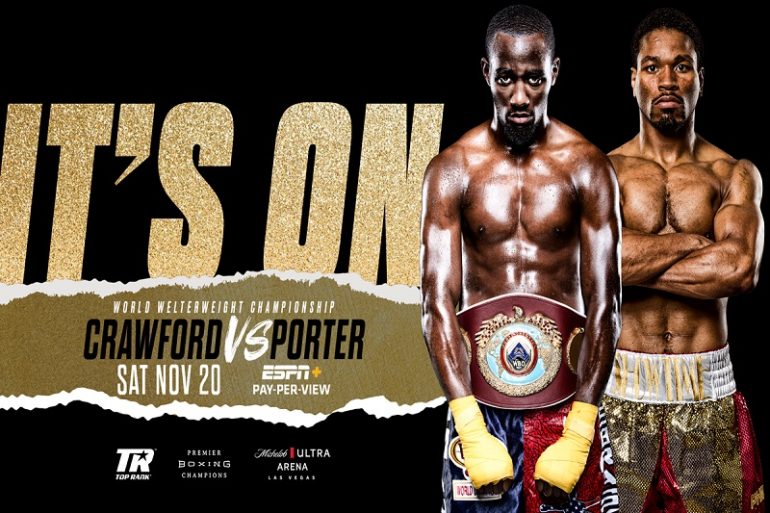 The fight, the co-feature of the Terence Crawford-Shawn Porter welterweight title contest, was cut short in the sixth round when Falcao suffered a vertical cut over his left eye and was badly rattled. With Falcao unable to continue, the bout was waved off by referee Mike Ortega and sent to the scorecards for a technical decision, which Falcao won 58-57 and 58-56 on two scorecards while one judge favored Volny 58-56.

With the victory, Falcao, a pro since 2014, became the mandatory challenger for the winner of the unification fight between IBF titlist Gennadiy Golovkin and WBA counterpart Ryota Murata, who are scheduled to fight on December 29 in Saitama, Japan, on DAZN.

Falcao, a southpaw, had a big first round thanks to a sustained flurry of punches he landed with both hands late in the round as Volny covered up on the ropes.

Falcao picked up in the second round where he left in the first with an opening flurry that, once again, forced Volny to cover up. Volny tried to fight from the outside and jab Falcao but had limited success.

The Robert Garcia-trained Falcao (29-0, 20 knockouts), 31, pressured Volny, forced him into the ropes and let his hands go time and again. Volny (16-1, 10 KOs), 32, of Montreal, who was facing by far his best opponent, mounted a brief rally late in the fifth round.

An accidental headbutt opened a cut over Falcao’s left eye in the sixth round that badly rocked him.

Ortega called time out so the ringside doctor could examine Falcao. There was an extended conversation between Falcao, the doctor and Ortega, who also consulted with the commission before the fight was stopped at 2 minutes, 18 seconds and sent to the scorecards for a technical decision.

Middleweight Janibek Alimkhanuly, a 2016 Olympian from Kazakhstan and one of boxing’s top prospects, beat and battered former middleweight titlist Hassan N’Dam, relentlessly until the fight was finally stopped in the eighth round of their scheduled 10-rounder.

“I am ready for a world title shot next. ‘Qazaq Style’ is about to take over the middleweight division,” Alimkhanuly said. “Any champion, it doesn’t matter. I must give credit to N’Dam, a tough former champion who took a lot of punishment.”

Alimkhanuly (11-0, 7 KOs), a 28-year-old southpaw, was in command all the way, marching forward, throwing power shots and forcing N’Dam back.

In the third round, he unloaded many punches and had N’Dam in trouble. Referee Kenny Bayless was looking close and then Alimkhanuly landed a right hand that dropped N’Dam. He beat the count but the round ended before Alimkhanuly could throw another punch.

Alimkhanuly landed two powerful left hands late in the fourth round that hurt N’Dam but, again, the round ended before he could follow up.

He charged at N’Dam (38-6, 21 KOs), 37, of France, in the opening seconds of the fifth round and hurt him again with a left hand and several follow-up shots. Even more left hands that rocked N’Dam followed later in the round but he managed to stay upright and it was more of the same in the sixth and seventh rounds.

In the eighth round, Alimkhanuly cornered the game N’Dam and landed a brutal combination and referee Kenny Bayless stepped in and waved it off at 2 minutes, 40 seconds.

The win was Alimkhanuly’s second straight over a former world titlist, having knocked out Rob Brant in the eighth round on June 26.

Lightweight prospect Raymond Muratalla stopped Elias Araujo in the fifth round of their scheduled eight-rounder in a strong performance.

The Robert Garcia-trained Muratalla (13-0, 11 KOs), 24, of Fontana, California, landed many solid straight right hands and hooks and even though Araujo (21-4, 8 KOs), 34, of Argentina, was also in there swinging, he often came up short on his punches. Muratalla also mixed in a steady diet of hooks to the body.

Araujo, with a cut under his left eye and blood streaming down his face, appeared to slow down in the fifth round as Muratalla continued to unload on him with right hands to the head and left hooks to the body. According to CompuBox, Muratalla opened the round with a barrage that had him landing 29 of 45 power punches.

Although Muratalla, who recently recovered from COVID-19, was landing punches, there had not been a specific big shot that landed when referee Allen Huggins stepped in and stopped the fight at 2 minutes, 20 seconds as bitterly Araujo complained and was in tears.