Andrade makes statement against Quigley, Martinez and Arroyo in No Decision 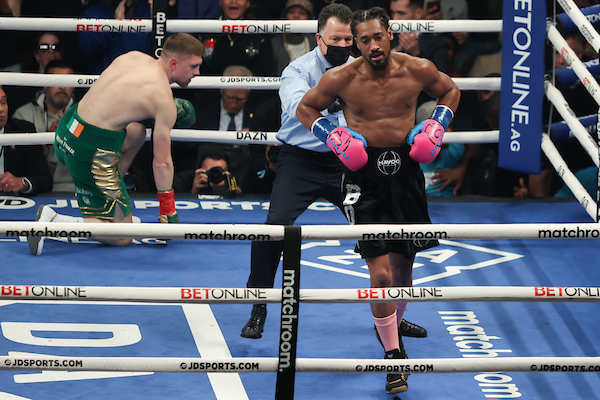 Demetrius Andrade promised a knockout, and he delivered emphatically.

Andrade, who retained the WBO 160-pound world title for the fifth time, made a clear statement with the win. After years of criticism for carrying opponents through fights, Andrade wasted no time dispatching Quigley, who barely landed a punch.

“I did [what I predicted],” he stated to DAZN’s Chris Mannix. “I felt good, looked good. Tall, black, and handsome, it’s me again in the building.”

For much of fight week, “Boo Boo” has voiced his frustration on certain people not pushing hard enough to get him the big fights against the big names in his weight class. When Mannix asked if Andrade took out his anger on Quigley, the 33-year-old initially took the high road.

“I delivered the message, and that was to stop Quigley, let them know I’m onto the next. Who’s next? What’s next?”

Next, he wants to challenge either fellow undefeated and former 154-pound titleholder Jaime Munguia or a unification bout against the winner of the Dec. 29 title fight between Gennadiy Golovkin and Ryota Murata.

“Jaime Munguia need to be fighting me if he’s looking to fight ‘GGG.’ GGG or the winner or the loser of [the Murata fight], I’ll fight either one of them because they’re both elite, top fighters.”

Andrade (31-0, 19 KOs), of Providence, Rhode Island, as he typically does, got off to a ferocious start. He rattled Quigley (19-2, 14 KOs), 30, who has been knocked out in all of his defeats, with a short right hook on the inside that caught him right on the chin. The Irishman attempted to hold, but Andrade sent him down to the floor with another left for a 10-8 opening round.

“I showed you what I wanted to do,” he explained. “I wanted to get in there, put some damage in early, and that’s exactly what I did.”

Andrade, a former junior middleweight titlist who is currently ranked No. 3 at 160-pounds by The Ring, dropped Quigley for the second time in the fight with about 58 seconds remaining in round two with a thunderous straight left hand before one final barrage ended the fight.

“[After] he felt the first body shot from the liver, you know, it was time [to go].” 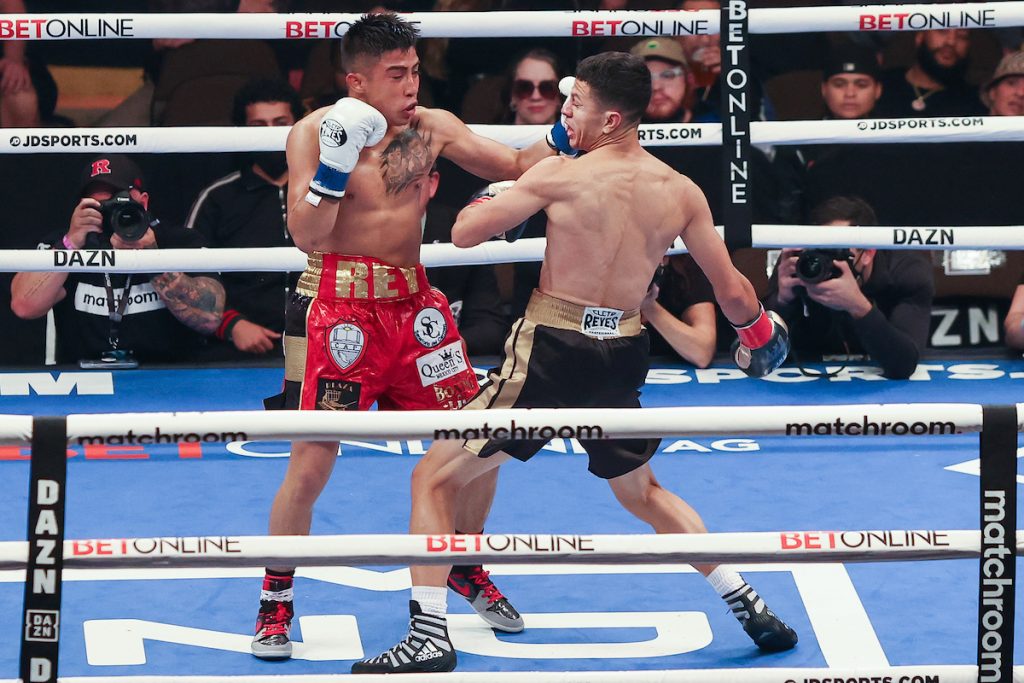 An accidental headbutt resulted in a no decision.

Mexico City’s Martinez stumbled into the ropes from a left hook that was correctly ruled a knockdown by Johnny Callas in the first round. Arroyo smiled until the 2008 Puerto Rican Olympian was himself decked with a signature Martinez lead left hook.

A cut opened up over Arroyo’s right eye, which was deemed to have been caused by an unintentional headbutt. As the blood continued to worsen, Arroyo was knocked down again from a shove that was ruled a knockdown by Callas.

The ringside physician inspected Arroyo’s damaged eye prior to the start of the third round and ruled Arroyo could no longer continue. Arroyo also confirmed that he was unable to see, which likely aided in the call.

Martinez (18-1, 14 KOs) defended his 112-pound title for the fourth time. His first title fight also ended in disappointing fashion, seeing victory escape his grasp, though it was entirely of his own making. In what was supposed to be a third-round knockout win over Charlie Edwards in August 2019, that fight was also ruled a no contest after Martinez drilled him with a body shot while he was down. However, he won the vacant belt in a subsequent fight over Cristofer Rosales and has yet to relinquish the strap.