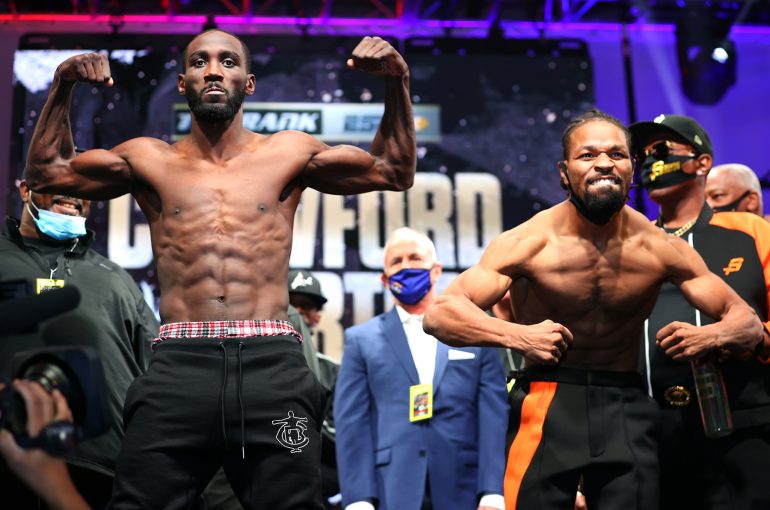 LAS VEGAS – Terence Crawford and Shawn Porter, both seeking the biggest win of their respective careers, appeared primed and ready to do battle on Saturday night.

Both were in immaculate condition at the weigh-in on Friday inside the Islander Ballroom at Mandalay Bay about 30 hours before they will clash in a highly anticipated fight on Saturday (ESPN+ PPV, 9 p.m. ET, $69.99) at the resort’s Michelob ULTRA Arena.

Crawford, a three-division world champion, who will be defending his WBO welterweight title for the fifth time when he faces his longtime friend, weighed 146.4 pounds, just under the 147-pound division limit. Two-time WBC welterweight titlist Porter was 146.6 pounds.

Because they are friends they have been all business throughout the promotion with zero trash talk and nothing but good things to say about the other man. Even when they faced off there was never the remote hint that things could get out of hand.

After they stepped off the scale, Porter was smiling and standing next to a stone-faced Crawford, but when they turned to stare into each other’s eyes, Porter suddenly turned serious as well for an intense face-off.

Porter turned away first, immediately broke into a broad smile again and began to flex for the limited crowd of a few hundred allowed to attend, which included event officials, media and immediate family and friends of the fighters. Crawford then stepped forward and also began to flex, drawing the bigger cheers before turning and walking away.

Porter and his team then also walked away, each member of his team wearing a black sweat jacket with the word “WAR” emblazoned in orange on the back.

“Me and Shawn Porter are gonna get in the ring and I’m gonna show everybody why I’m the best fighter in the world,” Crawford said this week.

“A lot of people been talking, saying I haven’t fought anybody (elite) at the welterweight division and everybody I’ve been fighting is either a has-been, broken or some type of excuse. So, here we are with Shawn Porter, one of the elite welterweights in the division and we’re gonna see how he fares against me.”

Crawford (37-0, 28 KOs), 34, of Omaha, Nebraska, acknowledged that the recently crowned undisputed super middleweight world champion Canelo Alvarez is currently the pound-for-pound king but that his performance against Porter can change the way media and fans perceive the top of the of the mythical rankings.

“Canelo earned that spot right now being that he just conquered the whole (super middleweight) division in a year,” Crawford said. “I said it depends on my performance this weekend. If I go in there and look spectacular and get Shawn Porter out of there we have a discussion to talk about.”

Porter (31-3-1, 17 KOs), 34, of Las Vegas, who has defeated top welterweights Danny Garcia and Yordenis Ugas but also suffered close decision losses to Keith Thurman and Errol Spence Jr. in a unification fight, is supremely confident for the fight with Crawford.

“Terence Crawford has never been in the ring with a fighter as confident, as poised and as excited as I’m gonna be on fight night and that is a problem for him,” Porter said. “I am different. You take a look at any of my fights and you’ll see the combinations and the versatility that I have and he has not been in the ring with that.

“I’m one of a kind and you say why are you the guy to beat Terence Crawford when no one else has? Well, I am rare and when you’re rare, and people aren’t used to seeing what you have, it’s hard to adjust to on fight night. My experience on top of my skills and everything I have makes me the guy.” 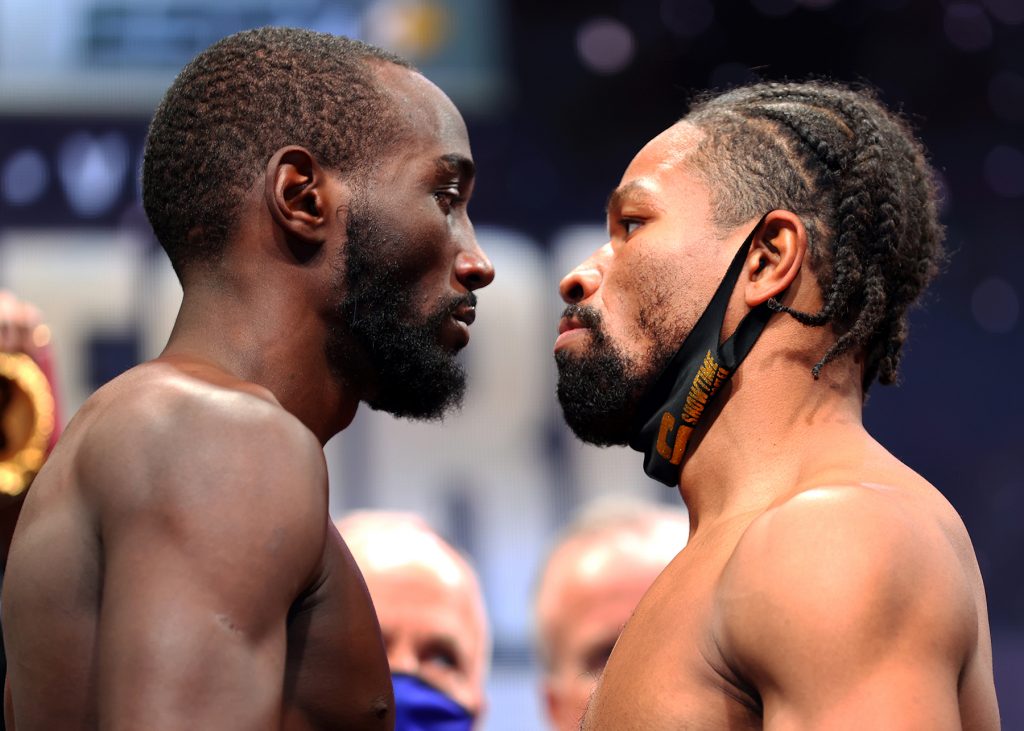 Everybody else on the card also made weight.

There will also be two preliminary fights on ESPN2 and ESPN+ beginning at 7 p.m. ET.

The first two bouts of the night will be shown on the ESPN App beginning at 6 p.m. ET.