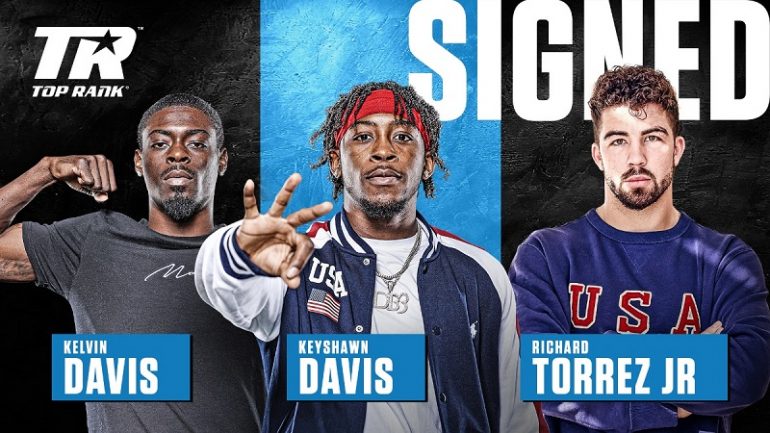 LAS VEGAS – Top Rank made it a clean sweep of the men’s U.S. Olympic boxing team on Wednesday, announcing that it has signed lightweight Keyshawn Davis and heavyweight Richard Torrez Jr., both of whom won Olympic silver medals for Team USA at this past summer’s delayed 2020 Tokyo Olympics, to long-term promotional contracts.

In addition, Top Rank also signed junior welterweight Kelvin Davis, Keyshawn’s older brother. The Davis brothers have also both joined the training stable of Brian “Bomac” McIntyre, who trains Crawford, and have been in camp with him them for the past two weeks.

Keyshawn (3-0, 2 KOs), 22, and Kelvin (2-0, 1 KO), 24, both southpaws from Norfolk, Virginia, will both fight next on December 11 at New York’s Madison Square Garden on the Vasiliy Lomachenko-Richard Commey undercard, with Keyshawn’s six-rounder against an opponent to be determined part of the four-fight main card on ESPN.

Torrez’s professional debut will take place in the first quarter of 2022.

All three were in attendance at the Crawford-Porter final pre-fight news conference on Wednesday at Mandalay Bay in Las Vegas.

“Top Rank is proud to promote an outstanding group of fighters who also comport themselves with dignity outside the ring,” Top Rank chairman Bob Arum said. “Richard Torrez Jr. is a southpaw pressure fighter who will instantly become a heavyweight fan favorite. I can’t wait to see the Davis brothers, both of whom have valuable experience as pros and will shine at Madison Square Garden on December 11.”

Davis, who also claimed silver medals at the 2019 World Championships and 2019 Pan American Games, falling in the gold medal match each time to Cuba’s Andy Cruz, was viewed by many as the best professional prospect on the Olympic team. He fought his first three fights without a promotional deal, including two on Canelo Alvarez undercards that Matchroom Boxing promoted. Davis told The Ring that he was pursued by Top Rank, Matchroom Boxing and Probellum but opted for Top Rank.

“They had one of the best deals. I had a lot of deals out there, great deals out there, but when it comes to developing fighters and exposure, I know Top Rank is going to put me on that pedestal because they believe in me,” Keyshawn said. “I just felt like Top Rank was the best decision not only for me but they’ll treat my brother correctly as well. I feel we are the best prospects coming out of the gate and doing it big. I feel like there aren’t other prospects like me and my big brother.”

The Davis brothers, who are managed by their mother Wanda, both most recently boxed on May 8 on the Alvarez-Billy Joe Saunders card, at AT&T Stadium, in Arlington, Texas, and they are excited to return on a significant card at the Garden.

“I’m just excited to fight, honestly,” Keyshawn said. “Of course, I want to be on big cards and I want to end this year with a bang.”

They have high goals for their careers.

“World championships, multi-division, unification, undisputed,” Kelvin said. “The sky’s the limit for us. We’re really reaching for the stars.”

Torrez, a 22-year-old southpaw from Tulare, California, about 45 minutes from Fresno, is trained and managed by his father, Richard Torrez Sr., who was an accomplished amateur boxer with more than 250 fights and advanced to the semifinals of the 1984 U.S. Olympic Trials.

Torrez was 154-10 as an amateur, a U.S. National Championships gold medalist in 2017 and 2018 and won three U.S. Youth National titles from 2014 to 2016. He became the first U.S. Olympic super heavyweight to medal since Riddick Bowe claimed silver in 1988. Torrez’s Olympic run ended with a competitive decision loss to longtime rival Bakhodir Jalolov, who is 8-0 as a pro.

Torrez and his father were talking to various promoters and were guests of Top Rank last month at Tyson Fury-Deontay Wilder III. Ultimately they decided Top Rank was the right place to sign.

“I feel Top Rank is where legends are made and I also feel like there is a core group of people and fighters that I trust that are with Top Rank,” Torrez told The Ring. “I sat down and talked to my dad and this is the right decision for us. We’re staying in shape, I’m ready to fight and I’m excited to show the world what I can do in the pros.”

The 6-foot-2, 230-pound Torrez and Keyshawn Davis would love to be part of a card that features them and their Tokyo Olympic teammates.

“I think it’s incredible,” Torrez said of all five of the men signing with Top Rank. “I really hope one day we can have an Olympic card. That would be really cool. Duke, Tiger, Troy, Keyshawn and I grew up together as amateurs. I can’t wait to see what the future holds.”

Said Davis: “We had a lot of talks when we were amateurs. We’ve been around each other for years and we’d all talk about who we would sign with. We all felt the same. Shoot, why not an all-Olympic card? It’s very possible with the group we have. Let’s make it happen.”