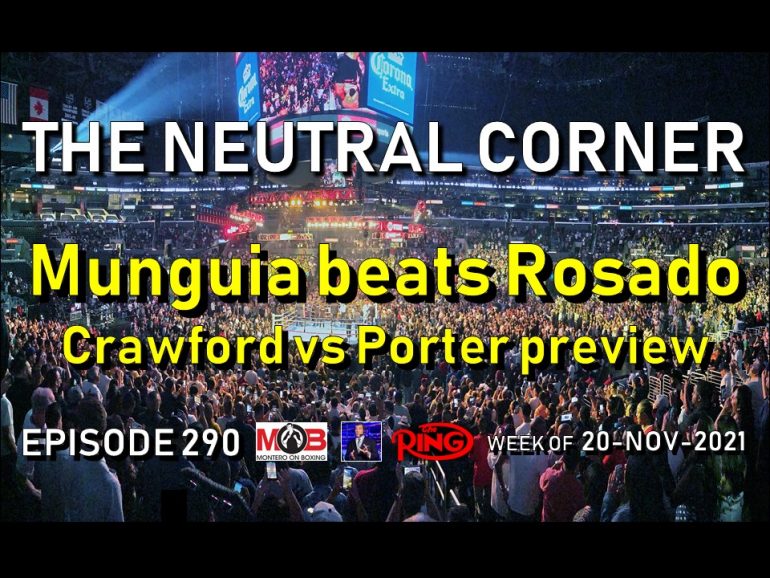 On episode 290 of The Neutral Corner boxing podcast, host Michael Montero reviewed a loaded weekend of boxing from around the world. He also previewed the upcoming Crawford vs. Porter welterweight showdown and took calls from the listeners.

On Saturday, November 13, there were three cards of note.

In England, Kiko Martinez scored a come-from-behind knockout win over Kid Galahad in a Matchroom Boxing headliner. After being dominated from the opening bell, Martinez landed a huge overhand right that dropped Galahad near the end of the fifth round. The Sheffield native made it to his feet, but was KO’d for good at the start of the sixth with another overhand right. In the co-main, Alycia Baumgardner stopped Terri Harper in the fourth round, taking her WBC 130-pound title with her back home to America.

In Phoenix, Arizona, David Benavidez broke down a game but outgunned Kyrone Davis in a PBC on Showtime headliner. Could the former super middleweight titleholder be in the running for a showdown with Canelo next year? Most fans agree he would pose the biggest challenge for the undisputed champ. Jose Benavidez and Francisco Torres fought to a disputed draw in the co-main.

In Anaheim, California, the middleweight slugfest between Jaime Munguia and Gabriel Rosado more than lived up to expectations. Although Munguia won a rather one-sided unanimous decision, Rosado had plenty of moments in the main event of a Golden Boy Promotions card that was broadcast on DAZN. After the fight, Munguia called out Gennadiy Golovkin, who is set to face Ryota Murata next month in Japan.

“Munguia and Rosado gave a good show,” said Miguel. “No controversy, no wack judging, just straight up good boxing. Munguia was on another level.”

“It’s shit or get off the pot time for Andrade,” said Nacho. “I’m tired of this guy coasting and winning boring, ugly unanimous decisions. If Andrade really wants to make a statement, he’ll take Quigley out.”

“Rosado was game as ever against Munguia,” said Juan. “He landed some big shots. It makes me wonder, what would happen if a stronger puncher had landed those punches?”

“I sure hope Canelo eventually takes on Charlo and does the GGG trilogy, just to close out the deal,” said Ruben. “I think Benavidez will move up to 175 pounds.”

“I’m not a fan of Charlo getting the Canelo fight,” said Steve. “I just don’t think he’s done enough to earn that fight. He hasn’t done anything at middleweight yet and he’s just supposed to cut the line and go to super middleweight?”