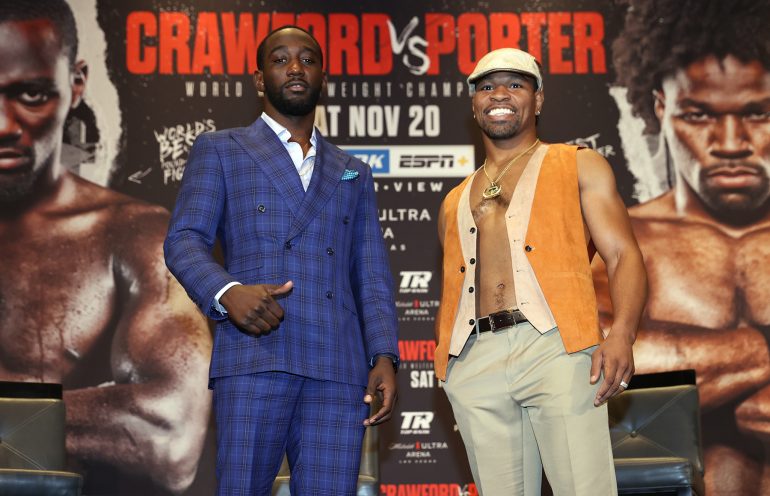 On Saturday, hugely talented boxer-puncher Terence Crawford will look to defend his WBO welterweight title for the fifth time when he meets his mandatory challenger and former two-time titleholder Shawn Porter at Mandalay Bay, Las Vegas.

Crawford, who is rated No. 2 by The Ring, has won titles at 135, 140 and 147. However, it’s his body of work at junior welterweight, where he became undisputed champion, that helped separate him from the rest. Since moving to welterweight, the 34-year-old Nebraska native has claimed the WBO title and made four successful defenses, beating Jose Benavidez (KO 12), Amir Khan (TKO 6), Egidijus Kavaliauskas (TKO 9) and Kell Brook (TKO 4).

Porter, who is rated No. 4 by The Ring, is a two-time welterweight titleholder. The 34-year-old Las Vegas resident outpointed Devon Alexander to claim the IBF title in 2013 but lost it the following year to Brook (MD 12). “Showtime” rebounded well and narrowly edged Danny Garcia (UD 12) to claim the vacant WBC title in August 2018. He made one successful defense before losing a unification match to Errol Spence Jr. (SD 12).

How will Crawford (37-0, 28 knockouts) deal with the raw aggression Porter figures to bring? Can Porter (31-3-1, 17 KOs) rough up the defending champion and get inside and make this into a dog fight? At 34, both men are likely past their physical primes, but will one of them show any signs of wear and tear? On paper, this appears to be Crawford’s toughest challenge as a professional, but will it turn out that way or will he be able to turn back Porter like he has previous opponents?

“I’m really looking forward to this one. Crawford has had an answer for everything that’s come his way as a professional but this in my opinion is the toughest test he’s had. Porter is as battle-tested as they come and will try to be rough and physical with the more naturally talented defending champion. However, while Porter will get his licks in, I see Crawford being a step ahead and managing the fight well en route to claiming a 12-round decision. I see it eight rounds to four, which translates to 116-112 for Crawford.”

“Is it any surprise that Porter was the PBC welterweight who was willing to “cross the street” and break the PBC/Top Rank impasse? It shouldn’t be because Porter has been an “anyone, anywhere and anytime” fighter and his immense physical strength will challenge Crawford’s acumen like no opponent has. Unfortunately for “Showtime Shawn,” Crawford is a versatile stylist with a ring IQ that is only exceeded by his mean streak and that versatility will be his key to victory. Both men will rise to the challenge the other man presents, and while Porter will once again push an elite opponent, it’ll be Crawford who will get the win on points.”

“I’ve seen slippage in Shawn Porter, at 34 he’s not at his physical peak. Ah, but Bud Crawford is also 34, though I don’t THINK he’s maybe slipped much off his peak. But it’s hard to know, because he hasn’t fought the caliber of foes that Porter has. This means Advantage Crawford. Both will likely be at their very, very best that night, because the motivation for each will be immense. But Crawford, after campaigning for a few years now more vociferously for getting the BIG fights, kind of has to win. He will, by decision, by a 3-4 round margin. Crawford is the better technical pugilist; he scores a 12-round unanimous decision.”

“Shawn Porter, to me, is the Oba Carr of this generation; a talented boxer who comes up short every time he is faced with an elite opponent. I see this fight playing out the same way as Porter’s other setbacks, with Porter setting the pace and making an exciting fight but ultimately out-finessed by the movement and greater accuracy of Terrence Crawford. This fight will go the distance, with Porter winning early rounds until Crawford begins to time and counter Porter from outside from the fourth round on. Porter’s Plan B is to do Plan A better, and that does not work against the very best in boxing… and Crawford is that!”

“Both Crawford and Porter went pro in 2008 and both are 34 years-old. That’s about where the similarities end. I believe Porter has more miles on the odometer and it will show in the later rounds of this fight. Crawford is a little taller and longer, and he uses his length better than just about everyone in the sport right now. I expect this bout to begin slowly, with both fighters looking sluggish in the early going. Inactivity (ring rust) will be a factor. But Crawford will begin to separate himself in the middle rounds and dominate late. Bud wins via TKO11.”

“They’re both 34, fighters and friends who grew up in the amateurs, traveled to the same tournaments, trained in the same gyms and then worked their way up to the top of the pro game. Terence Crawford and Shawn Porter know each other like long-time neighbors engaged in the same business. It was inevitable that they would one day meet as rivals in a crossroads fight to decide who’s better. Crawford has advantages. He’s taller by an inch. His reach is longer by an inch. This fight will be decided by inches. Porter is clever. He knows how to read a foe’s habits and psychology. He knows what buttons to push. He’ll push a lot of them, all in an attempt to disrupt Crawford’s rhythm and focus. But it won’t be quite enough in a fascinating fight that will end with Crawford winning by inches.”

“Shawn Porter always makes for a difficult night but he has consistently come up a round or two short in his biggest moments. That is unlikely to change against Crawford. Both have been out of the ring for roughly a year so ring rust should be an equivalent problem for them, providing neither an edge in terms of activity. That said it may be a tougher night for Crawford than he expects but he wins a decision that is closer than the judges’ cards reflect.”

GARETH A DAVIES: CRAWFORD UD
“Great test for Crawford with Porter a perennial championship fighter at 147-pounds. Will be close but Crawford should retain his title by unanimous points decision.”

“All three of Porter’s losses have all been close fights. It’s hard to prepare for a style like Porter. Switch-hitting won’t work on Porter who squares up and can fight any style. I don’t think anyone alive can easily beat him. Bud will have his hands full. Bud by close decision.”

“Porter is strong and will make it messy in the first half of the fight. Once Crawford settles in and finds his range, he’ll pick Porter apart. Crawford by decision.”

“I believe Crawford to be the most versatile boxer today, he can switch to both stances and probably has one of the best boxing IQs in the sport today. I like Porter’s jab. I think he will want to go on the inside for body work but often takes risks over committing and losing balance. If Porter wants to engage in a war, I believe Crawford will counter attack and stop him. I believe Crawford wins via a late knockout.”

“Terence Crawford all the way. I love Shawn Porter. But I don’t think that he has fought the kind of opposition in his career that would prepare him for a master like Crawford. Porter is tough and I know he will give his all. But I expect that Crawford will win a fairly safe decision.”

“Not the 147 fight that we all want to see but a very good clash in the welterweight division. We know Porter and he will bring 100 percent heart; he will be in great condition and will push forward round by round. However, I believe this will also show just how good Crawford is. I see a very entertaining bout where they will each have some good moments in the first half. Going into the second half is where I see adjustments and changes being made by Terrance and that will be key, he will surprise many with inside body work against a strong inside fighter like Porter. In the end I see Crawford winning a close but unanimous decision.”

“Porter is a hard night for anyone, even Crawford’s main rival for top spot at 147-pounds Errol Spence had to go the full 12 but Crawford should win this, it’s a question of how. Spence, Thurman and Kell Brook decisioned Porter so Bud is looking to better exalted company but he’s a special fighter on an amazing run. It’s more than 5-years since Crawford heard the final bell so we have the irresistible force taking on the immovable object. What gives? If Crawford gets a sniff he’ll go after Porter but I fancy he may have to settle for winning by decision.”

WAYNE MCCULLOUGH (FORMER WORLD CHAMPION/ TRAINER): CRAWFORD TKO
“The Terence Crawford vs. Shawn Porter fight is an interesting match. Porter showed in his fight with Errol Spence that he still has a lot to give in this welterweight division. Crawford has stopped his last eight opponents so I’m sure he will be looking to be the first to try and stop Porter. I expect Porter to push the fight with nonstop movement and aggression and try to stay close, where he will do his best work. Crawford will probably be happy to let him come close so he can use short hooks and uppercuts on Porter.
Porter will have success early but I think Crawford will pick up close rounds early with scoring punches and then, in the second half of the fight, he’ll start to use long jabs and straight rights or lefts – depending on which stance he fights in as he likes to switch. Porter will try to get close but I believe he’ll get picked off and I think there could be a possible late stoppage win for Crawford.”

“Crawford is the No. 3 pound-for-pound on my list. We have a fight. Round 1, they’ll come out feeling out each other but once Crawford has timed Porter, we’re going to get a really good fight where Crawford is challenged round after round. There’s going to be some close rounds. The skills of Crawford will overcome Porter will. I believe that every round will have a few seconds of fireworks and at the end we’ll be asking for rematch because we’ll want more. In an exciting fight, because Porter loves to fight, I see Crawford winning a hard-fought decision.”

“If there’s a guy on Crawford’s record I’d be looking at in terms of how Crawford might handle Porter, it’s probably Jeff Horn. Crawford, who was a lightweight, had me thinking he might have trouble with the bigger and physical Horn but he handled him rather easily. Porter might be better than Horn but he’s also not as big. In an entertaining fight, I can see Crawford pulling away in the second half of the fight and winning a comfortable decision.”

“I think it’s going to be an ugly fight. No matter who the opponent is Porter’s always makes them not look good due to his awkward style. Overall, I have Crawford winning by decision.”

“I’m going for Crawford. He’s unbeaten, full of confidence, he stopped Kell Brook in four-rounds and Porter lost Kell. Crawford has a better KO rate so for me Crawford by points or late stoppage.