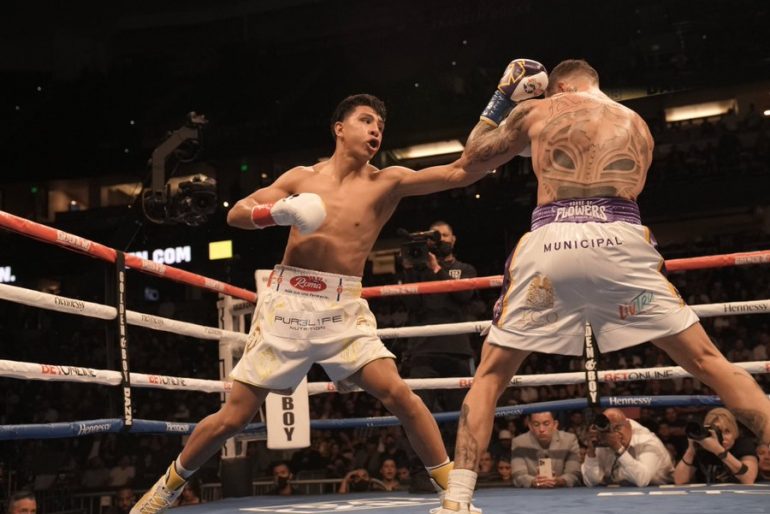 Jaime Munguia isn’t the most ring savvy middleweight. He’s doesn’t have the tightest technique, and he’s not slick at all. But there isn’t a world-class 160 pounder that can match his relentless workrate. And there aren’t many top middleweights who could take the punishment Munguia dished out for 12 rounds as well as Gabriel Rosado did on Saturday night.

Munguia soundly outworked Rosado to a unanimous decision by scores of 119-109, 118-110 and 117-111 in front of a vocal crowd of 11,000-plus at the Honda Center in Anaheim, California, but the 35-year-old veteran was game and dangerous throughout the entertaining Golden Boy Promotions main event that was streamed live on DAZN.

“This was my toughest fight so far, but it was a great fight that everyone enjoyed,” Munguia (38-0, 31 KOs) said during his post-fight interview.

“(Rosado) was a strong opponent because he was coming down from 168 pounds.”

Rosado earned his shot at Munguia, The Ring’s No. 6-rated middleweight and the No. 1 contender for both the WBC and the WBO, in a crossroads match at super middleweight.

In June, Rosado (26-14-1, 15 KOs) landed a perfectly timed counter punch against Bektemir Melikuziev, knocking the hot prospect out cold in Round 3.

However, the two-time middleweight title challenger wasn’t able to find the sure shot against the 25-year-old budding Mexican star, who wisely set a fast and busy pace from the opening bell. Rosado remained game and dialed-in throughout the fight, but he was soundly outworked in every round. 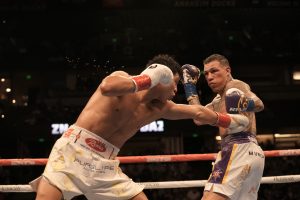 Munguia didn’t merely throw more punches than the older fighter, he fired off fast and fluid three-, four-, and five-punch combinations to Rosado’s body and head. Rosado slipped and blocked as many punches as he could, and he certainly landed his share of clean power shots, but he ultimately absorbed an inordinate amount of damage.

That doesn’t mean the fight wasn’t a compelling bout. Rosado always seemed one punch away from turning the fight in his favor, even as he was seemingly drowning in punches during the early rounds.

They went tit for tat in the final minute of Round 4 and during Rounds 5 and 6, and just when it seemed like Munguia would overwhelm Rosado with his rapid-fire combos in Rounds 7 and 8, the battle-tested Philadelphian appeared to rock the young contender late in the eighth. Rosado rallied at the end of Round 9 and took the fight to Munguia in Round 10, but the championship rounds were clearly edged by the Tijuana native who appeared to come of age during this battle.

Rosado can be forgiven for believing the fight was tighter than the official scorecards indicated.

“I thought the scorecards were too wide,” Rosado said during his post-fight interview. “I thought the fight was a lot closer. He never hurt me, but I hurt him for sure. Every time I went to the body I was hurting him. I had him hurt in a few rounds.

“I’m proud of my performance. I hope the fans enjoyed it.”

They did, and the same fans will enjoy watching Munguia, a former WBO 154-pound beltholder, go for his second world title in a second weight class.

Munguia will eventually be a mandatory challenger for the sanctioning body straps belonging to Jermall Charlo and Demetrius Andrade. Both Americans have better skills and technique than Munguia but neither looked like world-beaters in their most recent title defenses (Charlo was taken 12 rounds by unrated Juan Macias Montiel, a two-round TKO victim of Munguia’s when both were teenage welterweights; Andrade had a tough night against Liam Williams).

DAZN commentator Chris Mannix asked Munguia about a future showdown with The Ring’s No. 1-rated middleweight Gennadiy Golovkin, who will face Japanese star Ryota Murata (Ring’s No. 5 contender) on December 29.

“Yes, me and GGG would be a great fight for the public,” Munguia said. “I feel very strong at middleweight and I’m getting stronger and better with each fight. We’re ready for a world title or an elimination bout in the coming year.”