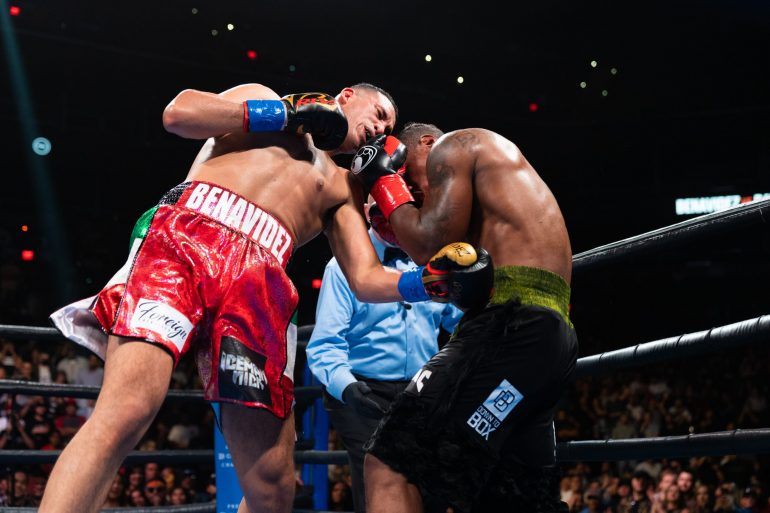 Though Benavidez (25-0, 22 knockouts) was a heavy favorite to win in his hometown against the late replacement Davis, Benavidez had to work hard to score the stoppage, which came at the 48-second mark.

Davis, a career junior middleweight and middleweight, was outgunned by the much larger appearing Benavidez, who had reigned twice as WBC super middleweight titleholder before losing the belt due to out-of-the-ring circumstances.

After a tentative start, Davis (16-3-1, 6 KOs) stood and traded punches with Benavidez in round 4, hoping to get some respect. Benavidez may not have backed off, but Davis earned the respect of the fans, who cheered louder for the determined underdog.

Benavidez, who was hoping to make his case for a shot at undisputed super middleweight titleholder Saul “Canelo” Alvarez, poured on the punishment, pressuring Davis with hard-hitting flurries along the ropes, but it was the body work that did the most damage on Davis, who had never previously been stopped.

Davis, 27, of Wilmington, Del., never lost hope, verbally challenging Benavidez, 24, during the fifth round and instructing his trainer, Stephen “Breadman” Edwards, not to stop the bout. Edwards gave Davis every chance to continue fighting until he no longer could handle the pressure, throwing in the towel early in the seventh.

Towel gets thrown in round 7. @benavidez300 gets it done against a game @KyShutitDown#BenavidezDavis pic.twitter.com/S2UBogp4YD

Davis had taken the fight on two weeks’ notice, replacing Jose Uzcategui, who had tested positive for the banned performance enhancing drug Recombinant erythropoietin (rEPO), which is used to boost stamina.

The bout was Benavidez’s first in his hometown since May of 2015, when he stopped Ricardo Campillo in two rounds.

The hometown crowd showed their support for Benavidez’s bid to face the biggest name in boxing, shouting enthusiastically when Benavidez asked the crowd afterwards, “I think everyone wants to see me against Canelo, right?”

Alvarez had completed his mission of unifying all belts at 168 pounds with an eleventh round stoppage of Caleb Plant last week, and would be by far the biggest fight that Benavidez could land.

“I don’t really care what [Alvarez’s] assessment is of me,” said Benavidez, with his gumshield still in his mouth. “They need to give me the opportunity. I’ll go through anybody, whoever they want me to go through.

“[Charlo] doesn’t want to get in the ring with me because he’s a pussy,” said Benavidez.