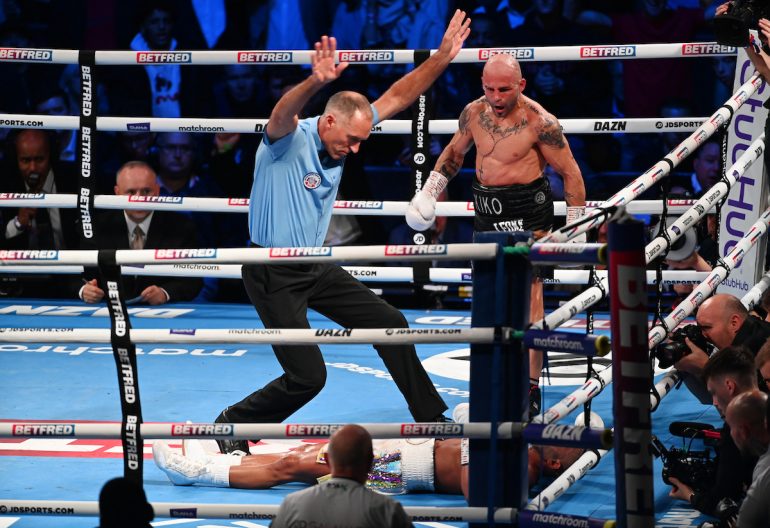 Everything was going perfectly for Kid Galahad at the Sheffield Arena in Sheffield, England… until it wasn’t.

After he’d hit Kiko Martinez with everything but the kitchen sink – after he’d schooled his opponent through four full rounds – the Spanish veteran floored him with a huge right late in the fifth round and closed out early in the sixth with the same shot to claim the IBF featherweight title in sensational fashion. The official time was 0:06.

“It may be a surprise for everyone else but not for me,” said an elated Martinez (43-10-2, 20 KOs) during his post-fight interview with DAZN. “For the last three years I’ve been living like a monk. I’ve had no holidays, no time with my family, no days off, I’ve been working 365 days a year.”

It’s been a long time since this reporter has seen anything like it.

Galahad shook Martinez with a sharp left hand in the first round and had a field day. The Sheffield star would lace the target with punches from either stance, then locate the exits with ease. Martinez appeared so much slower and struggled to land a punch of significance.

The visitor was cut over the right eye in the third and as his desperation to land something big increased he became more and more available to the counter. That was blood to a shark for Galahad who continued to make his opponent pay.

The defending titleholder boxed beautifully at times, switching effortlessly from body to head and mixing up the power on his punches. This fluid offense was made even more effective by quick feet, agility, superb reflexes and ring craft.

It is impossible to overstate how big a victory this was for the 35-year-old Martinez. The battle hardened warrior from Spain has lost fight after fight at the world level, going all the way back to his first loss to Carl Frampton in 2013. It seemed that very time he salvaged a bit of momentum an elite player would bring him crashing back down to earth: Frampton (UD 12), Scott Quigg (TKO 2), Leo Santa Cruz (TKO 5) and Gary Russell Jr. (TKO 5).

Well, the talk now is that this two-weight world champion – Martinez once held the IBF 122-pound title – is the greatest Spanish fighter of all time.

Galahad (28-2-1, 17 KOs) is a superb talent that left himself open for a bomb, but the true test will be how he responds to such an explosive and unexpected defeat. Rumors abound  that he struggled mightily to make the 130-pound limit, so tough decisions could lie ahead.

But this night belongs to Kiko Martinez. It was an absolutely astonishing comeback both in terms of reversing the action in the fight itself and in resurrecting a career.