Terri Harper wants a shot at the undisputed title, but Alycia Baumbgardner stands in her way 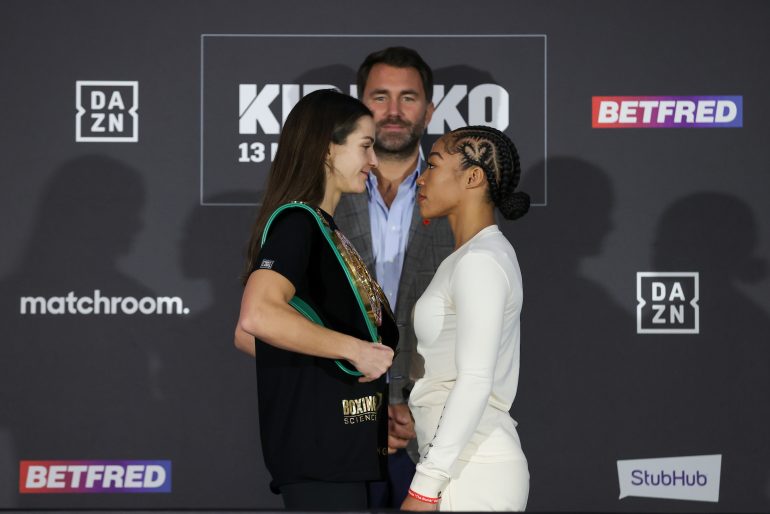 Terri Harper (left) and Alycia Baumbgardner face off ahead of their match on Sat. Nov. 13. Photo by Mark Robinson Matchroom Boxing
11
Nov
by Diego Morilla

During the last two years, England’s Terri Harper has been one of the busiest female fighters at 130 pounds, taking on some of the best opposition available and showing constant improvement in every aspect of the game.

On Saturday, Nov. 13, she will have to put all that improvement in full display if she wants to continue on her path to claiming the undisputed junior lightweight championship one day.

Anyone else would be worried about it, but not Harper.

“I know what I’ve got ahead of me on Saturday night,” said the current WBC titlist, who fights American contender Alycia Baumbgardner in the main support of the Kid Galahad-Kiko Martinez tussle. “I’m not overlooking Alycia, but this is a steppingstone in my journey and career. I want to go on and push on to have a big 2022 and hopefully get a unification against (WBA titleholder Hyun Mi) Choi, or push on for an undisputed against (Ring/IBF/WBO champion Mikaela) Mayer.”

A lofty goal, indeed, but easier said than done.

When The Ring’s Women’s Ratings were created, she was placed at No. 3 and then managed to reach No. 2 mostly in light of former No. 1 Maiva Hamadouche’s inactivity. And when a Ring title bout was approved between No. 1 Mikaela Mayer and No. 3 Hamadouche bypassing Harper, many people raised questions about why was Harper overlooked given that she was the No. 2 and the most active of the trio.

The truth at the time was that Harper had suffered an injury that ended up sidelining her for a while, and the truth now is that Mayer and Hamadouche proved to be more than worthy of the mythical Ring title in their recent bout, a serious candidate for Fight of the Year, regardless of gender.

Producing a performance that could put Harper (11-0-1, 6 knockouts) as the favorite against either one of those two warriors is a tall order, but ‘Belter’ feels this is her time.

“It’s been a long year; I had a tough time after the operations but here we are back on the main stage, and it feels like we haven’t been away,” she said, during a press conference, discussing her issues with her hand injury. “Even though I haven’t boxed for a year I’ve been in the gym non-stop, I had two weeks out to recover from the operation but since that I’ve been in the gym working, developing myself as a fighter not just physically but mentally. I’ve excited to get back out Saturday night and show everybody the improvements I’ve made, I’m not the same fighter I was a year ago and I’m ready to put on a show.”

Baumbgardner (10-1, 6 KOs) intends to put a stop to those ambitions.

“It is a very dangerous fight for Terri, I pose a big threat,” said the challenger.  “Just the experience I have with over 100 amateur fights and many former world champions in training camps. I’ve been prepared for these moments, just to go out there Saturday night to really do what I do best and get the win – I will become a world champion come Saturday night.”

It will take an extraordinary performance for either one of these two ladies to be considered a legitimate threat to Mayer or Hamadouche, considering how great they looked in their career-defining bout. Add the threat of Delfine Persoon, a perennial contender in the 130-135 pound range, and the challenge is suddenly even higher.

Both fighters are convinced that they have what it takes.

“She’s a tough and respectable opponent, I want to be out there Saturday night making a statement and showing everyone I’m back,” said Harper, with Baumbgardner replying that “on Saturday I’ll be able to show the many levels of boxing of what I have to offer to the sport and what I have to show Terri Harper Saturday night. She hasn’t been in the ring with somebody like me, I’m definitely going to show her and punish her every round.”