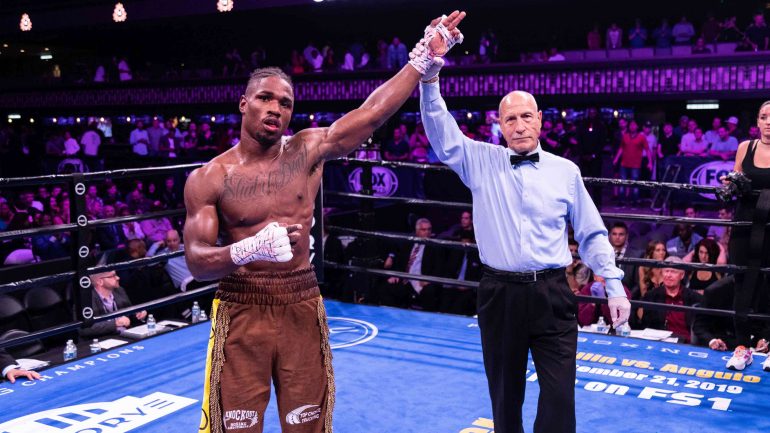 Kyrone Davis is fighting for the third time this year on Saturday night. The 27-year-old super middleweight from Wilmington, Delaware, got a month’s notice to fight former world titlist Anthony Dirrell to a 12-round draw in February. He received 13 days’ notice to beat Martez McGregor in September.

And now he’s been given 16 days’ notice to face one of the best 168-pounders in the world, former two-time WBC super middleweight titleholder David Benavidez on Showtime Championship Boxing (9 p.m. ET/6 p.m. PT) from the Footprint Center, in Phoenix, Arizona.

For Davis, it’s a life-changing opportunity.

Davis was in Terence Crawford’s camp when his trainer, Stephen “Breadman” Edwards, called to tell him he would have a chance at Benavidez, after his original opponent, former IBF titlist Jose Uzcategui, fell out when he tested positive for a banned substance.

“I never say ‘no’ to anything,” Davis said. “Breadman believes in me and he would never put me in any kind of danger. He trusts me and believes I can win, and I believe I can win.

“I wouldn’t have taken the fight if I didn’t think I could win. Breadman told me he likes this fight. I beat McGregor in September and I know I beat Dirrell. That was called a draw. I beat Marcos Hernandez for the first time, and Dirrell knocked him out.”

Sometimes, Davis said, it’s good not to have much time. It provides less time to think, and when opportunities like this come against someone like Benavidez, you grab it.

“I deal with what’s happening, and this took me a day to process the fight, and I clicked on and when you’re in it and you’re a competitor, you give it your best and I’m fighting to win,” said Davis, who will receive a six-figure, career-high payday. “I really don’t care what anyone else thinks. I wasn’t supposed to beat Dirrell. I don’t care what the scorecards said, I beat Dirrell.

“The pressure is on Benavidez. This is my life. It would change things if I beat him. He might look past me, and that would be a mistake. If anyone thinks that I’m going in there to lay down, they don’t know me. I believe in my ability and I’m really having fun with this.”

When Davis was a kid, he would watch Showtime boxing, and now he’s a main event on Showtime.

“I have something for Benavidez,” Davis said. “I have to be myself and listen to my corner. It’s just a fight. I’m a man. He’s a man. It’s a fight. I’m perfectly healthy. You’re going to see me come in shape and see a good fight, with two good fighters.

“But I will come out on top. This is the year of upsets and I want to be a part of it.”