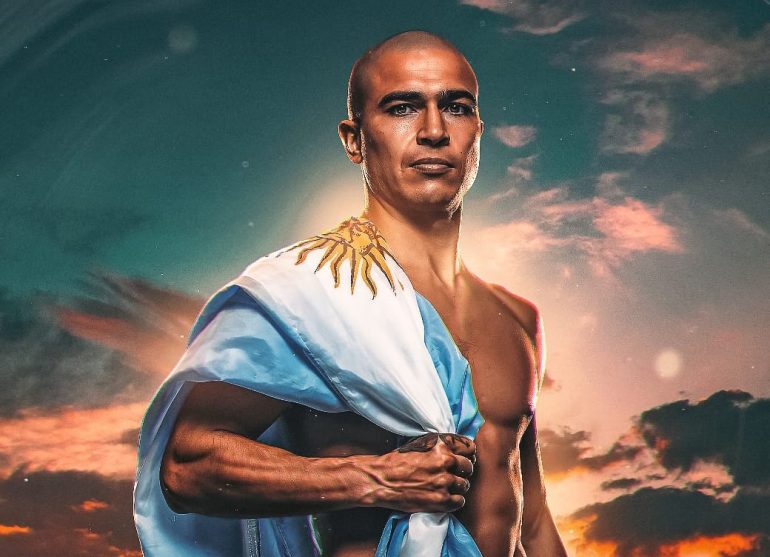 Raymond “Danger” Muratalla, the 24-year-old lightweight star from Fontana, California, has a new opponent for his PPV debut Saturday, Nov. 20 at Michelob Ultra Arena at Mandalay Bay in Las Vegas.

“After the cancellation of my fight against Joseph Adorno, who couldn’t make the weight, the folks from Top Rank told me that they would be offering another important fight to me,” said Araujo to RingtTV.com in an audio message during a stop in his training. “They asked me to keep training hard. Then this fight against Muratalla came up, and I am ready to face this challenge. I am eager to show that I am ready for this, I look forward to run over him and leave no doubt that big things are coming for me in the future. That’s it. This fight is my big opportunity.”
The PPV telecast also includes a 12-round IBF middleweight title eliminator featuring unbeaten contenders Esquiva “La Pantera” Falcao and Patrice Volny, and a 10-round middleweight tilt between rising star Janibek “Qazaq Style” Alimkhanuly and former world championHassan N’Dam. Presented by Top Rank and TGB Promotions, Crawford-Porter will be a Top Rank PPV exclusively on ESPN+ in the United States at 9 p.m. ET/6 p.m. PT.
Muratalla (12-0, 10 KOs), who trains with Robert Garcia in Riverside, California, has won seven consecutive bouts by knockout. Araujo (21-3, 8 KOs) has never been stopped as a professional, and his only two lightweight defeats have come via close decision. He was supposed to fight Joseph Adorno in Las Vegas on Nov. 5, but the bout was scrapped after Adorno missed the contract weight. Before the PPV broadcast commences, Southern California natives Adam “BluNose” Lopez and Adan Ochoa will fight in an eight-round featherweight rematch on the undercard telecast (ESPN2 & ESPN+, 7 p.m. ET/4 p.m. PT) headlined by the scheduled 10-round featherweight firefight between former world champion Isaac “Royal Storm” Dogboe and two-time title challenger Christopher “Pitufo” Diaz. Lopez (15-3, 6 KOs) hopes to rebound from June’s razor-thin decision loss to Dogboe, while Ochoa (12-2, 5 KOs) seeks retribution. Ochoa and Lopez fought as undefeated prospects in April 2017, and Lopez prevailed by four-round unanimous decision. The fight action begins on the ESPN App (6 p.m. ET/3 p.m. PT) with a pair of young stars. 2016 U.S. Olympian Karlos Balderas (10-1, 9 KOs) looks to continue his winning ways against Julio Cortez (15-3, 11 KOs) in a six-rounder at junior lightweight, while recent U.S. Olympian Tiger Johnson will make his long-awaited professional debut in a welterweight four-rounder versus Antonius Grable (3-1-1, 3 KOs). Johnson recently signed a long-term promotional pact with Top Rank. Balderas, the fighting pride of Santa Maria, California, lost his unbeaten record with a shocking knockout loss to Rene Tellez Giron in December 2019. After the setback, Balderas changed managers, signed a promotional contract with Top Rank, and linked up with noted trainer Buddy McGirt. He came back in August with a second-round knockout over Fidel Cervantes. Cortez, a seven-year pro, has never been knocked out. Johnson, from Cleveland, Ohio, advanced to the quarterfinals of the welterweight bracket at the Tokyo Olympics before losing a decision to eventual gold medalist Roniel Iglesias (Cuba).

A press release by Top Rank was used in this article