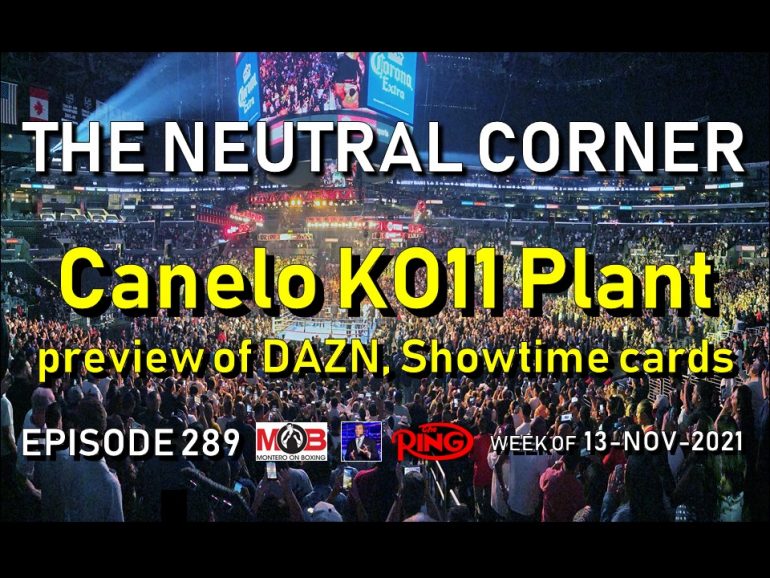 On episode 289 of The Neutral Corner boxing podcast, host Michael Montero did a detailed breakdown of Saul “Canelo” Alvarez making history in the super middleweight division. Canelo (57-1-2, 39 knockouts) became the first fighter to simultaneously hold all of the major world titles at 168-pounds with an 11th-round stoppage over the previously undefeated Caleb Plant last Saturday night in Las Vegas. 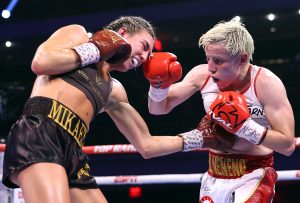 On Friday, November 5 at the Virgin Hotels in Las Vegas, Mikaela Mayer unified junior lightweight titles with a unanimous decision victory over Maiva Hamadouche. Most fans and media felt that Mayer (16-0, 5 KOs) was the rightful winner, but the official scorecards (98-92, 99-91, 100-90) were too wide in the Top Rank on ESPN+ main event.

As mentioned above, Alvarez scored a TKO11 win over Plant in the main event of a PBC card on Showtime PPV. It was Canelo’s fourth win in less than a year, making him the most active champion in the sport. Although Plant started well in the first few rounds, Montero argues that his punches had no power and Canelo mostly controlled the fight from the fourth round on. 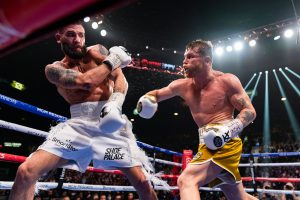 Canelo’s superior experience tells when he shares the ring with top fighters that are his age. Photo by Ryan Hafey/Premier Boxing Champions

“These young fighters today are very talented, but they couldn’t beat the old timers because they lack the experience,” said Juan Valverde. “And you could see it this weekend. Canelo is basically an old-time fighter with 60 fights. And Plant lost because he lacked the experience.”

“Caleb Plant is just inexperienced,” said Kevin. “He’s got 22 pro fights, while Canelo has 39 knockouts. He wasn’t ready for this level of competition.”

“The Canelo vs Plant fight went exactly how I thought it was going to go,” said Rah. “I’m not surprised at anything that happened at all.”

“Plant impressed me to an extent,” said Keith. “Going off his last fight with Caleb Truax, you could tell he was visibly gassed. Conditioning was an issue. I actually thought Canelo was going to annihilate him.”

“Jaime Mungia has got a lot better with every fight,” said Nacho. “I think he’s going to show that against Gabe Rosado this weekend. He’s going to take him out in emphatic fashion.”

“They’re marketing Tank Davis the same way they marketed Mayweather,” said Thad. “They know most of the public is stupid. They’ll believe the “five time champion” narrative. They don’t look at the fine print”

“I thought your (Montero) top all-time super middleweight list was pretty solid,” said E’San. “1. Calzaghe, 2. Ward, 3. Jones and 4. Canelo. I think that’s perfect. I don’t think there’s an argument for anybody being over Calzaghe.”