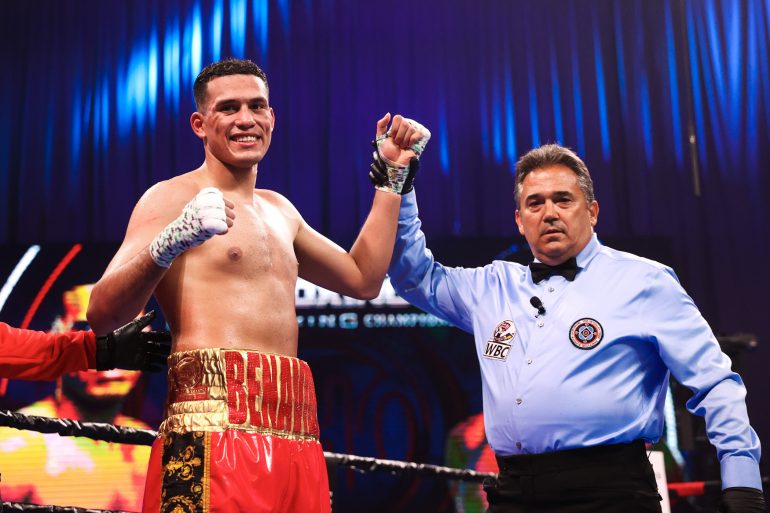 Could David Benavidez be next for Canelo should he defeat Kyrone Davis on Saturday?
09
Nov
by Anson Wainwright

Benavidez, who is rated No. 1 by The Ring at 168-pounds, is looking forward to his home-coming bout.

“It’s really exciting, I haven’t fought in Phoenix – in front of my people – for a long time,” Benavidez (24-0, 21 knockouts) told The Ring. “I’m expecting there to be an amazing crowd. In Phoenix there’s die-hard boxing fans.

“I haven’t fought with a crowd these last two fights because of the pandemic. I’m very excited to just have the crowd back. The ambiance and energy from the crowd will be different.”

The 24-year-old power-puncher intends to put on a spectacular performance for his patrons.

The American had been scheduled to face former IBF titlist Jose Uzcategui. However, the Mexican-based Venezuelan tested positive for the banned substance rEPO on October 28 and was promptly replaced by Davis.

Benavidez, who has been training at Brick House Boxing in North Hollywood, took the change of opponent in his stride.

“It’s very unfortunate because this was a fight I’d been working very hard for,” he explained. “These types of things happen in boxing; you have to be ready for when they happen.

“The good thing is, I had a great camp, everything was amazing. Now I have a different fighter with Kyrone Davis. He likes throwing combinations, he doesn’t really use the ring too much, I think that’s going to change as soon as he feels my power. I saw his last fight with Anthony Dirrell and just watching that fight, I don’t think much is going to change from that. I’m expecting him to be the best version of himself and we’re ready for whatever comes our way.

“I sparred with a lot of people, so me changing the game plan and working with a different style is not really too hard. It’s what I’m ready to do. I just have to watch film of him and see exactly what I want to do and put a game plan forward and execute it. Everything is pretty much the same, what we do, jab, combinations and bodyshots, that works for everybody and it’ll work for this guy too.”

As an added bonus, David sees his brother Jose join him on the card, making it a family affair. It marks the first time the elder Benavidez has fought since losing a WBO welterweight title fight to Terence Crawford in October 2018.

“That’s something I’m very excited about,” David continued. “The last time I fought in Pheonix, was on my brother’s undercard [in May 2015], now he gets to comeback and fight on my undercard. We’re in the same promotional company together, I’m very excited with the way everything is going.”

Davis turned professional in 2014. The 26-year-old won his first nine fights before dropping a decision to Junior Castillo (UD 8). He won three fights including edging previously unbeaten Marcos Hernandez (SD 10). He lost for the second time when he was outboxed by Patrick Day (UD 10).

Since then, he has won three of four, the blemish came against former WBC 168-pound titlist Anthony Dirrell (D 12). Davis (16-2-1, 6 KOs) is fighting fit having won in September.